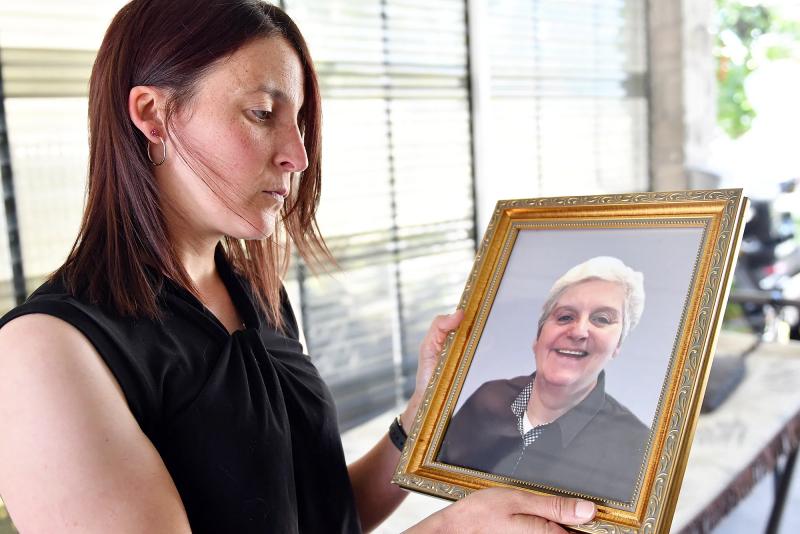 A young woman, whose mother was murdered in her sleep, wants to warn those caring for their children with mental health issues that they are at very real risk if they don't ask for help.

“My mother didn't open up very much, she kept everything to herself. When I emptied the house, I found psychiatric reports and I learned a lot. Since 2017, my brother said that my mother was the problem and that he was going to kill her. If we had known, we would have insisted more,” drops Mélissa Blais.

Violaine Gagnon's kindness will have been fatal to her. The Baie-Saint-Paul resident was hosting her son, Jean-Philippe Blais, when he knocked her unconscious with a cast iron skillet on August 3, 2019.

The police discovered the lady in a pool of blood hours later, after a co-worker raised concerns about his absence.

“It was one of our friends from Vancouver who sent us the TVA link on Facebook, saying: 'I hope that's not what I think,'” relates Mélissa Blais' spouse, Janick Turcotte.

For the couple, there was no doubt that Jean-Philippe was behind this, even if he had not yet been arrested. The police arrested him 24 hours later, in Quebec.

Jean-Philippe during his arrest in Quebec in August 2019.

Mélissa Blais knew that her brother was sick and had delusions. “We told him to go to a doctor, but he didn't want to. For him, it was true what was in his head,” she says.

The young woman argues that Jean-Philippe's problems coincide with his drug use. “He went to work out west and he took on all kinds of stuff. When he came back [in 2016], because his mother cut him off, he was eaten up, ”continues Janick Turcotte.

Then he started to get disorganized. Jean-Philippe was driving crazy, he was walking around with a fishing knife and he thought his relatives were going to poison him, reports his sister.

After each of his three hospitalizations in psychiatry, his mother took him back under his wing, even though he had threatened to slit his throat. “Sometimes parents don't see the risk. It's hard, but they have to keep a barrier, ”believes Mélissa Blais.

She and her partner called the police numerous times for help. “We didn't do it with lightheartedness,” says Janick Turcotte. My brother-in-law was at home, in psychosis, but I managed to take his knife away from him. He's sick, but he's smart. He kept his ears floppy when the police arrived so they didn't leave with [him].

“We just wanted him to get treatment and we felt like we were being put in the way,” adds Mr. Turcotte.

After the murder, the Crown attempted to have Jean-Philippe Blais declared a high-risk accused, but Judge Raymond W. Pronovost refused. This would have limited the killer's exits until another judge decides otherwise.

“If he had had it [the label of high-risk accused], we would at least have had the impression that justice had its say. There, we could meet him at the Galeries de la Capitale and they will tell me that they ensure the safety of the public, ”protests Janick Turcotte.

WHAT THE JUDGE SAID

“As far as dangerousness is concerned, the accused no longer believes himself to be dangerous since he is taking his medication, which makes him zen. “

“As Dr. [Sébastien] Proulx pointed out in his testimony, if there is no high-risk statement, it may well be that the accused, in the next few weeks, can be discharged from the hospital alone. It would be taking risks, since the accused has a significant background.

“It is true that the acts committed by the accused are serious, indescribably cruel. But, taking into account his background, it cannot be said that he is in the category of the most dangerous defendants for whom this article has been added. »