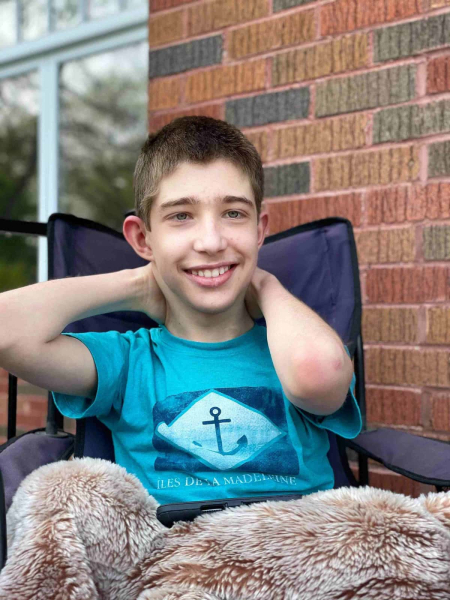 If there is a word that is overused, used in all sauces, it is the word “benevolence”.

But a series succeeded to reconcile myself with this word and give it back its letters of nobility. It's About Antoine, this series full of tenderness broadcast on Club illico.

Without ever falling into the marshmallow and the gnangnan, this series tells (under the guise of fiction) the true story of a family like no other who surrounds a child like no other… with benevolence…

I know Sylvain Parent-Bédard, founder of ComediHa!, well. In the world of entertainment and humor, he is appreciated and respected. But I did not know his son Antoine, 15 years old, autistic level 3, intellectually disabled, with multiple disabilities and high-level epilepsy.

Sylvain's girlfriend, actress and humorist Cathleen Rouleau, wrote the series About Antoine to tell the daily life of a girl who falls in love with a man whose child is severely handicapped. .

I expected to laugh: after all, when a comedian shares the daily life of an organizer of a comedy festival, it must still lead to some funny situations.

What I hadn't prepared myself for, on the other hand, was to be so moved and above all, to feel a real crush on Antoine, who plays his own role in the series.

Antoine is not verbal, but he communicates like no one else, with his cute smile, his piercing gaze, his cries of joy. But above all, Antoine communicates with his tenderness, his hugs, his kisses.

I completely fell in love when, after two episodes of the series, I watched Antoine, the wonderful, the behind-the-scenes documentary filming.

Cathleen Rouleau explains well what it means to be the beautiful- mother of a child with multiple disabilities: “It's not easy… but it's beautiful all the same. »

This is what the series gives us to see: beauty, human at its best and yes, a good dose of benevolence.

In “real life”, Antoine is surrounded by his father (and his father's girlfriend), his mother (and his mother's spouse and his two daughters) and his brother. All these people have created a reconstituted family, full of tenderness, united around a common goal: to take care of Antoine, to ensure him comfort and happiness.

It is a great human success, a beautiful story, which completely overwhelmed me.

This human chain of solidarity (they travel together, celebrate together) warmed my heart, in this individualistic and crazy era.

But beware: neither the documentary nor the series are miserable.

THE SKIN OF ANOTHER

We have often heard lobbies claim that only people living with disabilities play disabled characters on screen . I have always defended the idea that actors should on the contrary be able to play all the roles, to slip into everyone's skin.

But in the case of Antoine, I am convinced that he was the only one who could play his own role.

I am indeed convinced that I would never have had such a crush on an actor who would have tried to imitate the cute smiles of Antoine.

You can “pretend” to be disabled. But we can't pretend to be wonderful.