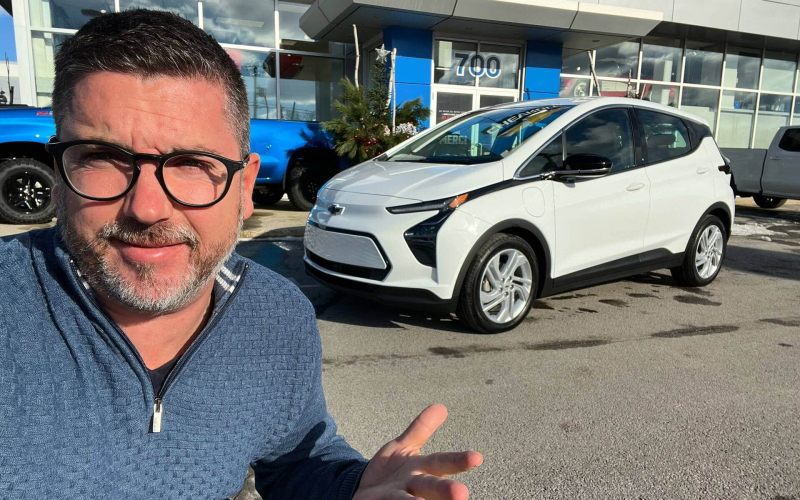 Funny enough, I often advise people on their next purchase, putting my personal allegiances aside. How many of them have thus procured following my advice vehicles that I would never dare to buy personally, because they tell me nothing? A Hyundai Santa Fe, Ford Ranger, Toyota Highlander or Nissan Sentra. Which, in a nutshell, is to say do what I say, but not what I do!

Well this week is different. Indeed, I can say that many motorists today drive a Chevrolet Bolt EV, following my recommendations. People who sometimes hesitated, who were scalded by the recall surrounding the Bolt's batteries, or who couldn't decide between a Soul EV, a Kona EV or a Nissan Leaf.

So, and after directing several motorists to this model, I too chose to take the leap. So here I am, the owner of a 2023 Chevrolet Bolt EV, which I would have liked to get in another color, but which arrived faster than expected. In fact, much faster. That's why I chose to take it even though I hate black or white cars, telling myself that otherwise I would probably wait another year.

So why the Bolt EV? Because this car can easily travel from Montreal to Quebec without needing to be recharged, even in winter. Because it's fun to drive, decently equipped and surprisingly spacious. Also, because unlike many other electric vehicles, it has proven its great reliability over the years. And above all, because it is the cheapest electric car you can get, leading me to believe that it will hardly lose a penny in value over the next few years. In fact, if people are willing to wait 12 to 18 months to get it, it's a sign that the enthusiasm is still very strong.

I must admit that by buying this vehicle, I also made an ecological choice. Admittedly, it will save me a lot of money on energy, but I thought it was time for me to compensate for my passion for old (polluting) cars, although mine are rarely used. Moreover, the very day I acquired my new Bolt EV, I also unearthed a pretty 1991 Mazda Miata, which will sit in the garage until spring.

The ecological gesture is especially significant insofar as I traded my full-size diesel-powered van for this car. This one is less versatile, but to carry a pocket of hockey and to make a few annual trips to the ecocentre, I thought it would do the trick.

That said, I was flabbergasted by the cost of insurance for the Chevrolet Bolt EV. Almost twice as much as my van, which was twice as valuable. And the insurers I asked for quotes also dared to tell me that they were applying the green vehicle discount! Wouldn't insurers take advantage of the fact that people save money everywhere with an electric vehicle to fill their trunk? Because between you and me, a Bolt EV is not wanted by thieves or bought by young people who will destroy them like GTIs, or very expensive to repair. In short, the price of insurance for this car is hard to justify.

In closing, if I chose the Bolt EV and not the Bolt EUV, it's because as far as I'm concerned, I don't see no benefit in paying more just for a different look, especially considering that the cargo space is nearly identical. Because all the appeal of the Bolt, apart from its known qualities, lies in its price and its eligibility for government subsidies.