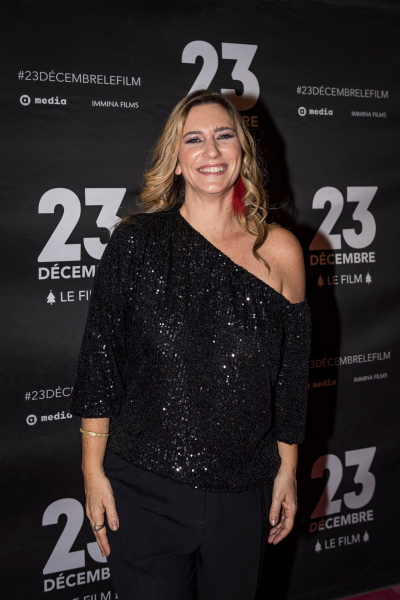 With her “December 23” which continues to be a hit at the box office after being the top-grossing Quebec film for 2022 with more than $2 million raised, Miryam Bouchard has reason to celebrate. And, through her cinematic memories, she also talks about romantic comedies…

Miryam, what is your first memory of a cinema?

It was at Le Parisien cinema, I was 10 years old. My father [Reynald Bouchard] had taken me to see “Tchao Pantin” with Coluche – my first film as a grown-up – which made me laugh a lot and then I was going to see him in a really dramatic film. “Tchao Pantin” is really anchored in me, because, since then, everything that is of the order of “crying”, as Jean Lapointe said, touches me very strongly. It would also explain why I asked Patrick Huard to play in my first film, “Mon cirque à moi”… There may be a link between Patrick Huard and Coluche. It also makes me take a different look at my father, who was an actor, clown and street entertainer…, it allowed me to understand the darker side of a creator. I have never seen “Tchao Pantin” since, so as not to alter my first contact with the film.

Did you know you wanted to make films with “Tchao Pantin”? ?

I was never comfortable in front of the camera, I always knew I would be behind it and I never wanted to do any other job.

A recent film that marked you?

“New Quebec” by Sarah Fortin. And without any objectivity because it is my sister-in-law whom I love who made this film! We discover the ghost town of Schefferville and the characters of Christine Beaulieu and Jean-Sébastien Courchesne find themselves in contact with the local Aboriginal reality. It's a wonderful movie!

“When Harry Met Sally”. I have mad love for Nora Ephron. For me, she is a model career woman who has found her voice and who has been listened to. […] I think there's something reassuring about going to see a romantic comedy, it's satisfying for the viewer, you're satisfied at the end. It allows us to laugh, to cry. It’s a genre that allows for several different moments of emotion. […] The romantic comedy was aimed more at women at a certain time. In recent years, the romantic comedy is for everyone. Since “The good side of things”, we have tackled unusual subjects and the romantic comedy tends to be modernized and we can present strong female characters, who are more like us.

Your first “kick” at the movies?

The first film you saw alone at the cinema?

Between two lessons, I went to see “The Piano” by Jane Campion. It completely shocked me, blown me away. The soundtrack… 30 years ago, without internet, I was looking for a female mentor, a director who could inspire me upwards. The process was complex at the time. I left the cinema… the snow… when I walked, my coat made the same movement as the heroine's dress. I felt like I was carried away by the film. I didn't want to talk, I wanted to stay in this bubble.

If everything were possible, a director dead or alive that you would like to invite to the cinema? And what would you go to see?

My father, who died several years ago, was outstanding. I would invite Charlie Chaplin and we would go see “Christmas and Juliet” in which he starred. My father embodies the character of Christmas, a clown and I would like Chaplin to see how much his work has influenced several generations.