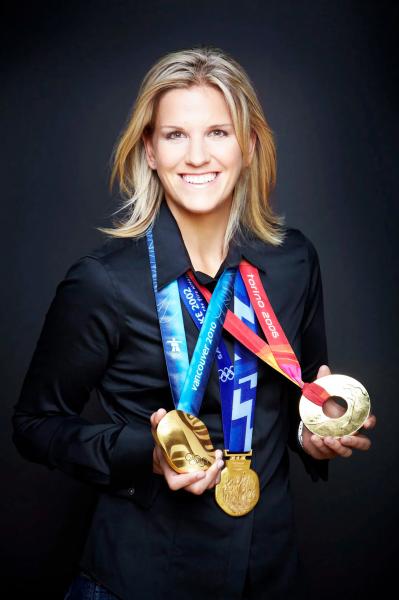 I had the pleasure of interviewing Kim St-Pierre, goaltender and Olympic medalist, between two baseball games and practices for her sons. With her father, André St-Pierre, who was a police officer with the SQ, her mother, Louise Vallières, teacher, her brothers, Yan and Karl, she lived in Saint-Jean-sur-Richelieu and Châteauguay.

When you were very young, you expressed your passion for the Olympic Games.

I was almost 6 years old when I declared on community television, without hesitation: “  ;I want to participate in all sports except hockey.

Why did you choose to play hockey?

We had a skating rink in our yard, which was maintained by my father. Our friends regularly played hockey on our outdoor rink and I would join them.

How did your parents react when you decided to play hockey?

< p>Their message was simple: have fun and make sure you do well in school. It wasn't complicated for them, until the day I decided to play as a goalkeeper.

For only one practice, my mother advised me.

I convinced her to allow me to play a match in that position, but it was a disaster as we lost the match 8-0.

You wanted to let it all go.

My parents taught me that defeat was part of life. Mom looks at me saying with all the love that a mother can give to her child: “I would like for the next game, you resume your position in front of the nets”. This was the beginning of my career towards the Olympics.

You were part of the men's teams up to the Junior AA level, in Châteauguay.

My teammates and coaches continually encouraged me, even if sometimes it wasn't always easy.

You had to endure the abusive language of the parents.

When you are young, you understand, but you do not necessarily accept that your opponent tries to disturb your concentration. However, the abusive language of parents on opposing teams had no place.

Your idols in your life.

I was dreaming one day replacing Patrick Roy with the Canadiens until the day I saw Manon Rhéaume, ice hockey goaltender with the Canadian Olympian team. From that day on, I wanted to succeed him at the Olympics.

I was not part of the women's program, but I played for elite level men's teams. During four training camps, I was cut from the Quebec women's team.

One evening, after my match with the Junior AA of Châteauguay, Dan Madden, from McGill University, wanted to meet my father and me.

You didn't speak the language of Shakespeare.

I listened to him attentively, but I understood absolutely nothing. Luckily my dad was with me. At the end of the meeting, he invited me to study and play hockey… at McGill University.

Tell us about your first session at the McGill University.

The courses, including philosophy and biology, are in English. I started looking for teammates within my team who spoke French to help me.

You moved into an apartment during your second year at McGill University.

I shared the apartment very close to the university with Amy Doyle, who like me was a goalkeeper. It helped me a lot to learn English and she, French. We are still great friends to this day.

Dad worked in downtown Montreal and frequently we were both at the arena at the university to practice to improve my game. When I was younger we played with a ball and later he was throwing pucks at me at 6:30 a.m. before I attended my lessons.

Your dream is starting to come true.

To When I was 19, I joined the Canadian team and competed in two world championships, before winning an Olympic gold medal which I won thanks to the work of my parents with me.

You have two beautiful boys.

Liam and Ayden are still in primary school, I'm so blessed and they are passionate about the sport. I try to instill in them the same principles that my parents taught me.

For more than 20 years, you have shared your life with your spouse. < /p>

I met Lenny Jo Goudreau at McGill University. Since this meeting, he is my man of confidence who has always been there to support me in my difficult times. I am so happy to have been able to share my last 20 years and to share the next years of my life with him.

It was a June 24th that you will never forget ?

I played golf with my two sons and my husband. During the round of golf, my spouse tells me that my phone rings constantly and he would like me to listen to the messages.

So what were the repeated messages?

The round of golf has ended. I hugged my children and my husband and quickly contacted my parents on the phone.

This is Lanny McDonald, I am proud to announce that you have been elected to the Hockey Hall of Fame.