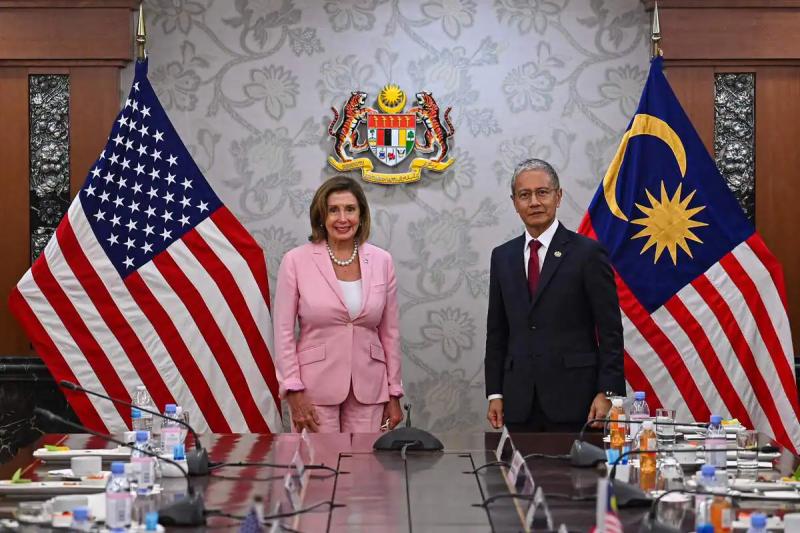 Nancy Pelosi, Speaker of the US House of Representatives, arrived in Malaysia on Tuesday, the second leg of an Asian tour that risks heightening tensions between China and the United States due to an unconfirmed but increasingly likely visit to Taiwan.

Beijing considers the island as part of its territory to be reunified, by force if necessary, and has repeatedly warned Washington against a visit by the senior official which would be seen as a major provocation.

Ms Pelosi landed at a Malaysian air base on Tuesday morning before meeting the prime minister and the speaker of the lower house of parliament, national news agency Bernama reported.

After Singapore and Malaysia, his itinerary includes stops in South Korea and Japan. The vagueness is knowingly maintained around a possible visit to Taiwan.

Several headlines in the international press, however, claim that a visit is well planned, the Financial Times referring to a meeting between Ms. Pelosi and the President of Taiwan on Wednesday.

If the White House is embarrassed by the situation, John Kirby, its spokesman said Monday that Ms. Pelosi had “the right to visit Taiwan”.

“There is no reason for Beijing to make this visit, which does not depart from long-standing American doctrine, a form of crisis,” he added.

Even while most observers judge the likelihood of an armed conflict to be low, US officials have said they are preparing for possible displays of force by the Chinese military, such as missile launches in the Taiwan Strait or massive aerial incursions around of the island.

On Tuesday, the Taiwanese Ministry of Defense said in a statement that it was “determined” to protect the island against threats from China.

The Speaker of the House is traveling on a military plane and although Washington does not fear a direct attack, the risk of a “miscalculation” is very present.

The United States practice a so-called “strategic ambiguity” diplomacy with regard to Taiwan, consisting in recognizing only one Chinese government, that of Beijing, while continuing to provide decisive support to Taipei but refraining from saying s whether or not they would militarily defend the island in the event of an invasion.

The Taiwanese government for its part refrained from commenting on a visit by Nancy Pelosi.

Prime Minister Su Tseng-chang did not confirm the visit Tuesday when asked by reporters, but thanked Ms. Pelosi for her support.

Taiwanese newspaper Liberty Timesquoted unnamed sources as saying Ms Pelosi would land on the island on Tuesday evening and meet Ms Tsai the following day before departing again in the afternoon.

The 23 million Taiwanese live under constant threat of an invasion from China, a fear that has increased since the rise to power of President Xi Jinping, who has made reunification a priority .

Last week, during a telephone interview with the US President, Mr. Xi called on the United States not to “play with fire”.

< p>“As we see it, such a visit seems very dangerous and very provocative,” Chinese Ambassador to the United Nations Zhang Jun said at a press conference. “If this visit takes place, it will also weaken the relationship between China and the United States, I am sure that the United States understands this.”

To support their message, the Chinese military broadcast Monday on the internet a video with a martial tone showing soldiers shouting that they are ready for combat, fighters taking off, paratroopers jumping from a plane or even a shower of missiles destroying various targets.

< p>Tuesday, the hypothesis of an imminent visit by the senior American official sent stock markets in Asia plummeting, as investors worried about the risks of escalation with China.

The President of the House of Representatives would be, if his visit is confirmed, the highest American official to visit Taiwan since his predecessor Newt Gingrich in 1997.