South American drug cartels use Air Canada flights from Colombia to Montreal and Toronto to smuggle hundreds of kilos of cocaine into the country a year.

This is what our Bureau of Investigation learned from a Sinaloa cartel drug trafficker who swore that he “regularly” ships coke shipments on Air Force planes. Canada linking the Colombian capital, Bogota, with Montreal and Toronto.

This is one of the startling revelations contained in the book Narcos PQ – The Cocaine Route , from Colombia to our streets, a collective written by the journalists of our Office of Inquiry and published this week.

“Before [2020], there were no direct Air Canada flights between Bogota and Montreal. But as soon as it started, we started the machine. Because it's very easy”, assured us this prolific drug trafficker based in Colombia, but who has already lived in the Montreal region.

The drug trafficker exhibited this kilo of cocaine in front of our journalists during one of their meetings.

HE HAS NOTIFIED THE RCMP

This criminal, who says he is not the only coke exporter to use this scheme, also claims that the Royal Canadian Mounted Police (RCMP) would be aware of it. But he regrets that she does not move more often.

It is because this trafficker who likes to gamble dangerously also acts as a police informant and he collaborates in secret with the RCMP.

“For a couple of shipments of [cocaine] product that we did, I even sent them videos. I had explained who were the guys who worked at the Toronto airport and who had to pick up the product,” explained the one who is called by the fictitious nickname of Angel in order to protect his identity.

The Sinaloa Cartel tattoo that the drug trafficker who confided in our Bureau of Investigation wears on his shoulder.

Angel clarified that each of the coke shipments by air weighs “between 50 and 75 kg maximum”, which represents worth $2.5 to $3.75 million on the Quebec drug market.

The coke is mostly airfreighted on cargo flights, passing it off as legal cargo, but it can also be concealed among the baggage of a passenger plane.

Narcos must to be able to count on the complicity of corrupt employees in the airports, who do not necessarily work for the airlines. They have the task of loading and unloading the devices.

This is called a “door” in the smugglers' jargon.

The accomplices then exchange text messages, photos or videos of the precious package and the exact place where it should be picked up, “with the pallet number” of the load, according to Angel.

“The first thing the 'gate' does when the plane arrives is get the product out before the world arrives, he explained. A lot of people are involved in that for us. They work cleaning at airports or put food on the plane.”

The cartels are doing the same to export their coke to the United States and Europe, from several Latin American countries, added our source who is also the subject of the show J.E. broadcast tonight on TVA and repeated on LCN this weekend.

The airline is not aware

“We are not aware of any ongoing investigations involving our airline's operations in Colombia,” Air Canada responded to our information.

“As a leading international carrier plan, Air Canada takes its responsibilities under Canadian and foreign laws very seriously. We are cooperating fully with law enforcement authorities in Canada and abroad,” added its media relations department in an email to our Office of Investigation.

The company also recalled that “passenger, cargo and baggage security checks, as well as other related checks at airports and borders, are the responsibility of various levels of government”.

In 2006, the Canada Border Services Agency and the Royal Canadian Mounted Police seized large quantities of cocaine at Montreal-Trudeau airport during Operation Colisée.

The Royal Canadian Mounted Police (RCMP) have nonetheless conducted a number of drug investigations in the country, having apprehended corrupt airline employees in the past. 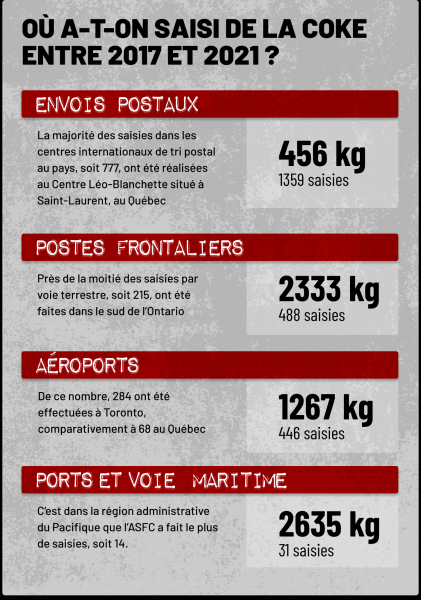 In Toronto, federal police notably apprehended six Air Canada employees in 2000 and two Sunwing employees in 2019 for their participation in narcotics imports.

In Montreal, the RCMP's Colisée anti-Mafia operation in 2006 also led to the conviction of several baggage handlers and employees of a private company that was mandated to provide food services and hygienic on Air Canada aircraft. 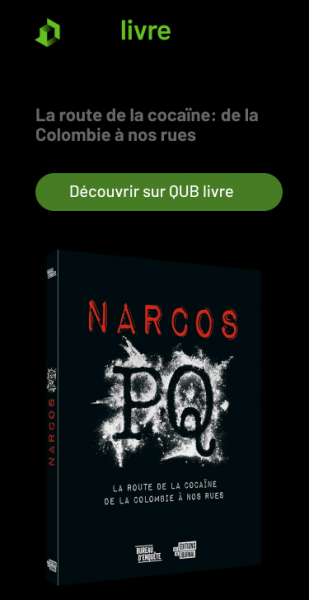 Félix and Marc finally understand what are the motivations of this Montreal narco expatriate to the kingdom of cocaine. Before stopping everything, Angel agrees to explain to them in detail the role he plays in Colombia to supply Quebec with coke. He will also reveal the underside of his secret collaboration with the police […], during a subsequent meeting, when the two journalists return to Colombia. But today, it's another of his secrets that Angel wants to reveal to them. And not the least.

Before leaving the hotel room, he unbuttons his shirt and begins by showing off a tattoo on his left shoulder: the Santa Muerte, also known as Santisima Muerte. She is the beloved goddess of death, whose origins date back to pre-Hispanic times in Mexico. Mexican traffickers worship him.

“She protects us when we send cargo. Then also, the day when we're going to be killed”, launches Angel in a resigned tone, convinced that his turn will come one day. “We know it's going to happen one day, we just don't know when,” he adds in a serene voice, with the expression of a man marked by the life he has lived.

Then Angel shows them a final symbol he chose to have drawn on his right shoulder. A big floral tattoo to signify his belonging to a big family. But not just any family: it is the symbol of the Sinaloa Cartel.

“I took my tattoo,” he laughs. When you have that, it shows that you belong directly to the cartel. And that you are protected. Want it, don't want it, it's a family. If someone is mad at you, they're going to be in trouble. The only ones who have the right to kill me are them. »

Félix and Marc are stunned. The man who is about to confess is not only a drug trafficker, but a member of the Sinaloa cartel, one of the most dangerous drug cartels in Mexico. And what makes this story even crazier than it already is is that he is also a mole for the RCMP and for the SPVM.

“[…] telling you about my life, making you meet the real world and explaining to you how it works, people will understand that it doesn't just happen in the movies. Sometimes I tell people stories and they don't believe me. But it's true nonetheless. »