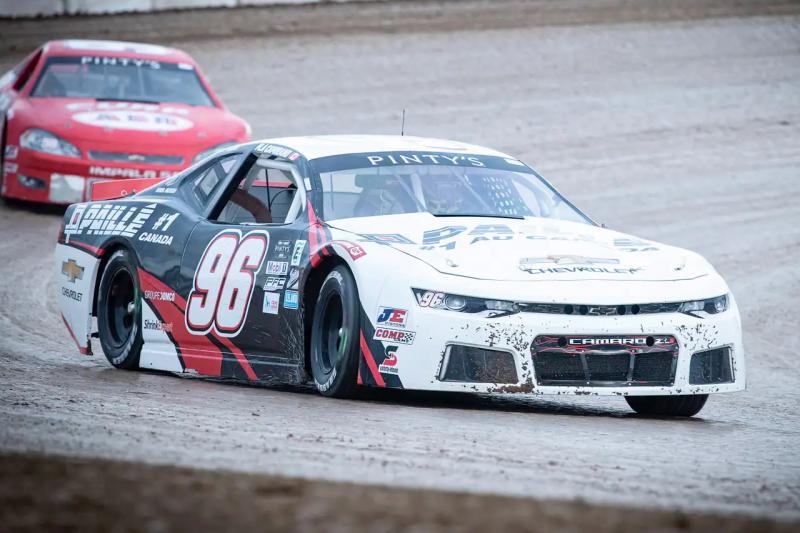 The first race in the history of the NASCAR Pinty's Series on clay was not fruitful for the Quebec drivers on Tuesday evening.

The event, contested on the Oshweken oval track, near Hamilton, was won by Treyten Lapcevich who reached the finish ahead of two other Ontarians, Stewart Friesen and Jake Sheridan.

Marc-Antoine Camirand and Alex Tagliani followed in order. For the first time in almost six years (76 races) in the Canadian stock-car series, no representative of La Belle Province reached the podium.

It had happened the last time on September 10, 2016 at the Saint-Eustache autodrome when Cayden Lapcevich (Treyten's brother), D.J. Kennington and Mark Dilley had occupied the three places of honor.

Andrew Ranger, ranked seventh, is the only other Quebecer to finish in the top ten in Oshweken.

After leading the first 48 laps of the race, Camirand handed over control to Lapcevich who retained the lead until the end of the event. An extra lap (101st) was necessary before the curtain went down.

“My car was less efficient during the second part of the race and it was becoming more and more risky for me to fight with the leaders,” explained the Saint-Léonard-d'Aston driver. alt=”NASCAR Pinty’s: Marc-Antoine Camirand saves the furniture” />

“The track was very slippery and any mistake on my part would have been costly,” he added. I had to think above all about the championship.

In this respect, Camirand did the right thing, as he regained the lead in the overall standings with only three stages on the calendar. With his 41 points in Oshweken, he tied for first place with D.J. Kennington with 385 points.

But these are 12 more points that should appear in Camirand's file. The latter was penalized a few weeks ago for allegedly using an exhaust system that did not comply with series regulations. The case has been appealed.

A hearing between the parties concerned will take place next Wednesday and the decision could be rendered before the presentation of the next event, scheduled for the ICAR circuit in Mirabel three days later. late.

Also penalized, this time, for “unsportsmanlike behavior”, Tagliani was cleared on Wednesday by NASCAR and therefore recovers the 12 points which had been withdrawn from him.

As for Louis-Philippe Dumoulin, this first experience on clay was not pleasant.

“We made risky adjustments for the race and it didn't work” , recognized the Trifluvien whose hopes of winning a fourth title are rather slim. I still believe in it, he says, but it will be difficult. For the last three races, my watchword will be to win and nothing else…”

Jean-Philippe Bergeron did not hide his frustration either. His chances of finishing first in the rookie standings have soared as the lead of his most serious rival, Brandon Watson (10th in Oshwegen), is important. The driver from Saint-Donat was the victim of the only abandonment of the race when he could not avoid two cars in distress in front of him.