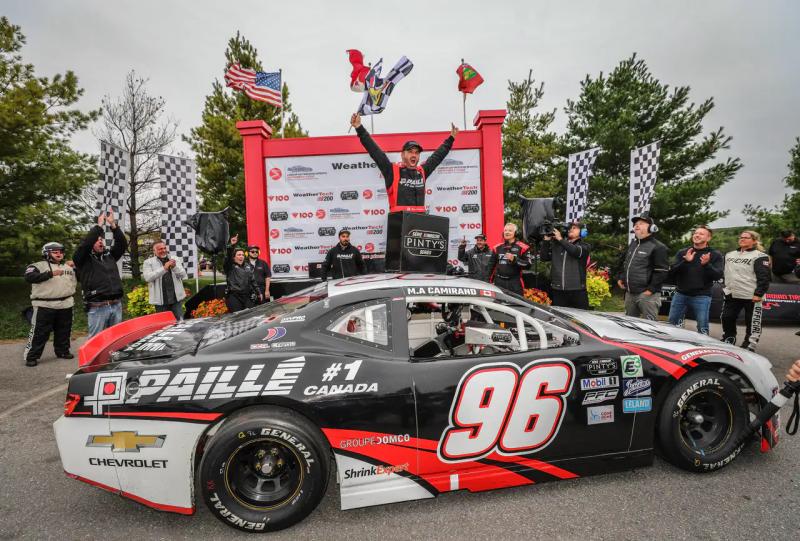 BOWMANVILLE | Marc-Antoine Camirand practically secured his first NASCAR Pinty's Series title by winning the 12th and penultimate event of the season, held on Sunday at the Mosport circuit in Ontario.

Kevin Lacroix and Gary Klutt, ranked second and third respectively, accompanied the winner on the podium.

Starting in the lead position, the pilot de Saint-Léonard-d'Aston wisely gave up the lead to Lacroix on the 5th of the 51st laps, but he regained the lead of the race on the 30th lap and never left it again.

Camirand thus signs the 12th consecutive victory for a driver Quebec on the Ontario route. He had also won on the same date last year at Mosport.

For having led at least one lap and the most laps during the race, Camirand scored the maximum points of 48. He will present himself with an insurmountable lead of 33 points (ahead of Lacroix) at the top of the table during the last stage of the season which will take place on September 25 at the Delaware circuit in Ontario.

Might as well say that this first title in the Canadian series is only a formality. He will only have to start in Delaware to succeed crowned Louis-Philippe Dumoulin in 2021.

As he repeated earlier in the week, victory was not crucial. And yet, it was in first place that Camirand reached the finish on Sunday.

“We knew that it was the most important race of the season, that if we had a satisfactory result at Mosport, you'd show up to Delaware with a good cushion. And that's exactly what happened.

“This victory is the perfect scenario. I can't ask for better. »

If Lacroix's threat had materialized in the final corners, Camirand would have let him pass.

“I had no interest in resisting him,” admitted Camirand. I had to think about the championship first. »

The error that never came

Lacroix, he never hid that the victory at Mosport represented his thin hope of joining Camirand at the top of the table. Provided, however, that the driver from Saint-Léonard-d'Aston is the victim of bad luck at the start of the course.

“I wished for a mistake on his part, but it never came. Pushing for the win and seeing him finish second wouldn't have changed anything for the title,” said Lacroix.

“Marc-Antoine was faster than me on the restarts. I could have tamped it on the last attempt, but I didn't. I let him go. »

If the driver from Saint-Eustache has to give up top honours, his second place allows him to overtake D.J. Kennington in second place in the cumulative classification.

Behind Camirand (488 points), the battle to champion promises to be particularly lively between Lacroix (455), Kennington (454) and Tagliani (452).

1 point is also awarded to the driver who leads the most laps during the race; each driver who led at least one lap earns another point.