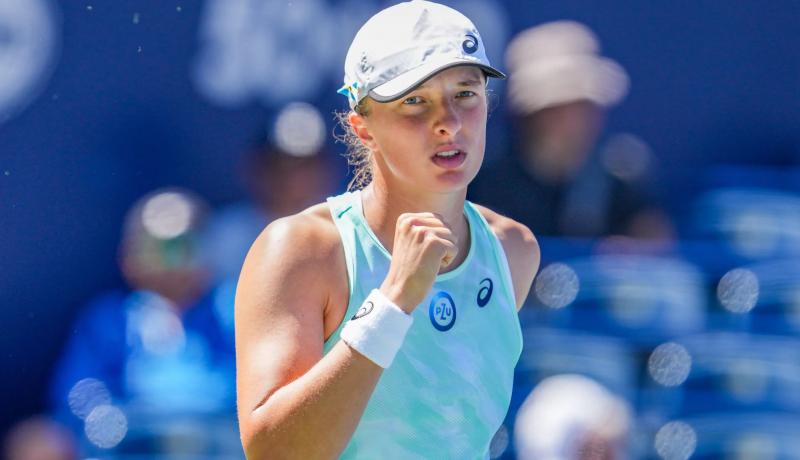 Toronto's National Bank Open favorite, the fearsome Iga Swiatek, had no trouble winning her first match of the tournament on Wednesday, defeating Australia's Ajla Tomljanovic in straight sets of 6 -1 and 6-2.

The Pole is back in Ontario, where she fully realized her potential three years ago. Now world number 1, she made a grand entrance on center court needing just 64 minutes to get rid of the WTA's 72nd racket.

“I'm pretty happy to have been able to play my way,” said the winner at a press conference. It was my first game and it's never easy. However, I feel like I found my rhythm and I had a solid performance.”

Swiatek was solid on serve with 73.1% of the points won on his first serve and three ace. It was quite the opposite for Tomljanovic, who was never in the game with the balls in hand. The Australian, however, broke her rival's serve twice in the second set.

It was precisely in Toronto in 2019 that the two players met for the only time. While losing 4 to 1 in the first set, Tomljanovic was forced to retire due to injury.

It was already the fourth game at the National Bank Open for the tennis player 29, who had to go through qualifying. Swiatek got a bye in the first round.

In the round of 16, the favorite will face the Brazilian Beatriz Haddad Maia. The latter surprised Quebecer Leylah Annie Fernandez.

The Americans are doing well

It was not easy for the 10th seed in Toronto, she who notably experienced all kinds of trouble when she was in possession of the balls. Gauff also committed an impressive total of 13 double faults. In the round of 16, she will face Belarusian Aryna Sabalenka.

Seventh seeded American Jessica Pegula beat her compatriot Asia Muhammad in straight sets 6-2, 7-5. She will face in the next round the Italian Camila Giorgi, who after defeating the British Emma Raducanu, defeated the Belgian Elise Mertens in two sets of 6-3 and 7-5.

The American Amanda Anisimova, falling from the Canadian Carol Zhao, for her part lowered the flag in front of the Czech Karolina Pliskova (14th) in two identical sets of 6-1. The match lasted 53 minutes.

Romanian Simona Halep (15th) defeated Chinese Shuai Zhang in straight sets 6-4, 6-2. She will face the winner of the duel between the Swiss Jil Teichmann and the Estonian Anett Kontaveit (2nd).