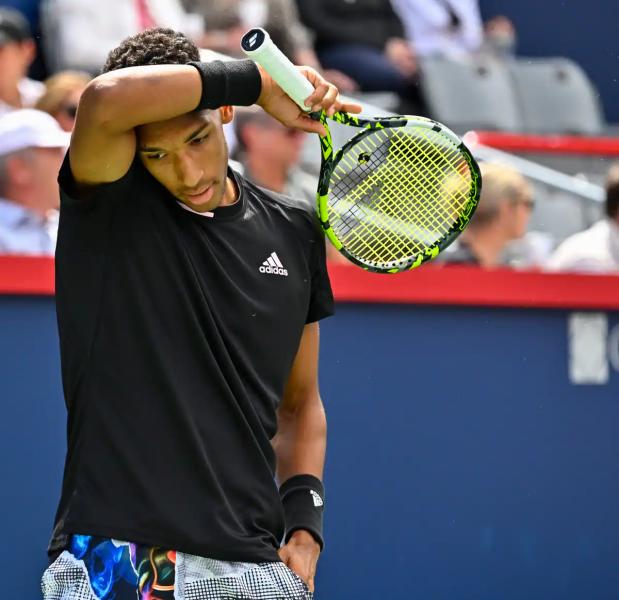 Félix Auger-Aliassime had a tough day “at the office” during his quarter-final match on Friday at the National Bank Open.

The Quebecois suffered a one-sided loss of 6-1 and 6-2 against the Norwegian Casper Ruud, fourth seed of the tournament. The latter delivered a perfect match, while Auger-Aliassime struggled.

“My first two games went well and there were positive things, mentioned the Quebecer after his match. I wasn't thinking about the ending.

“I have to give credit to Casper [Ruud]. He played well. For me, it's super disappointing to lose a tournament like this, especially here.”

This performance was the opposite of the one he offered Thursday against Cameron Norrie. From every point of view.

“I try to learn from every game, in wins and losses, added Auger-Aliassime. Today is another game in my career, and I'm going to see what I can learn from this one.

“The important thing is how I do react and bounce back next week. I'll give myself the next few days to decompress before getting back to work.

“It's not usual for me to play two good games and then lose like this.”

Nothing worked for the ninth racket in the world. His serve, which had been his weapon of choice against Norrie, sank him in that match.

He was broken three times in the opening set and twice more in the second. Auger-Aliassime won his first service game only in the 12th game of the match.

For the rest, Ruud was dominant. Everything he hit turned to gold. In addition, he did everything to destroy the local player's hopes of making a comeback.

The latter tried to put pressure on the Norwegian, but the He had answers to all his attacks. Everything was going well for the seventh player in the world.

Auger-Aliassime did not seem on his plate. He assures that he was not struggling with an injury.

“I was just forcing my shots and my targets, he explained. I played a very good first game and it got complicated quickly without knowing exactly why.

“I was not physically bothered. In the second run, I didn't feel at my best, but nothing out of the ordinary.”

He hands Auger-Aliassime the most one-sided loss of his career with a 6-1, 6-2 victory in Montreal.# OBN22 pic.twitter.com/D530IVe5sx

On several occasions, Ruud silenced the noisy center court crowd with high level strikes. Fans were in shock at what they saw on the pitch. Despite everything, they encouraged Félix to the last point.

When he left the field, he raised his fist to the sky to thank the fans for their support over the past few days.&nbsp ;

“It was a way of thanking the public who supported me during my time in Montreal,” said the 22-year-old athlete. It's always special to play here. There was also an element of disappointment to leave the court after a match like this.”

The least we can say is that Ruud put an end to Félix's party. He turned off the lights. He put away the chips and drinks. He even put the cake back in the fridge. We can now wonder who will be able to lift the crowd on center court.