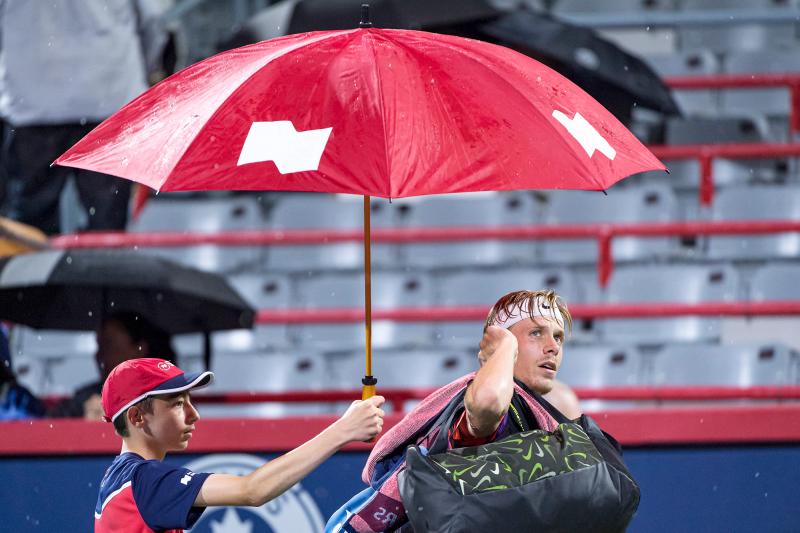 Denis Shapovalov was eager to reunite with the Montreal crowd for the first time since 2019. However, his reunion was cut short by rain in the second set as he faced Australian Alex de Minaur last night , in the first round of the National Bank Open.

The Canadian was in bad shape when the rain started to fall on the IGA Stadium. The game was stopped with a 3-3 score in the tiebreaker. The two players will therefore have to return to the field to complete their meeting this afternoon.

They will jump on the court after the matches of Vasek Pospisil and Alexis Galarneau on the central. < /p>

Shapovalov lost the first set 7-5. He was looking to avoid a ninth loss in his last 10 games. His last victory dates back to the first round of Wimbledon at the end of June.

We expected a tight duel and that's what we got until the interruption due to the rain. de Minaur was in control of the duel due to his opportunism. He got the big shots at the right times.

Shapovalov wasn't playing badly, but not well enough to take the lead. His style has always been aggressive. In order to find his bearings, he would do well to adopt a more conservative style for a few weeks.

However, this is easier said than done. It's hard to play against your instincts.

Shapovalov's first run was a reflection of his final months on the tour. The 22nd racket of the ATP gave free points to his opponent.

On several occasions, his game lacked consistency. He missed easy shots. For example, he missed an easy volley at the net when he had de Minaur at his mercy. He sent the ball into the net. That point gave the Australian ranked 21st in the world the first set.

A game that a high level player succeeds 90% of the time, but not Shapovalov for a few weeks. A matter of trust above all.

At the mercy of Mother Nature

The organizers of the National Bank Open were at the mercy of the whims of Mother Nature on the first day.

The first match on the central, between the Finn Emil Ruusuvuori and the Swiss Stan Wawrinka, was to start at noon. However, due to the rain and the drying of the terrain, it started around 4 p.m.

The rain caused the postponement of several matches to today.

Among these, there is that of the Briton Andy Murray.

Not an ideal situation, but it's part of the reality of the sport.

Montreal Tournament Director,
Eugène Lapierre, and his team are keeping their fingers crossed for the rest of the event.

When the rain comes, it's a real headache for the organization at all levels.

Things to watch on Tuesday in Montreal