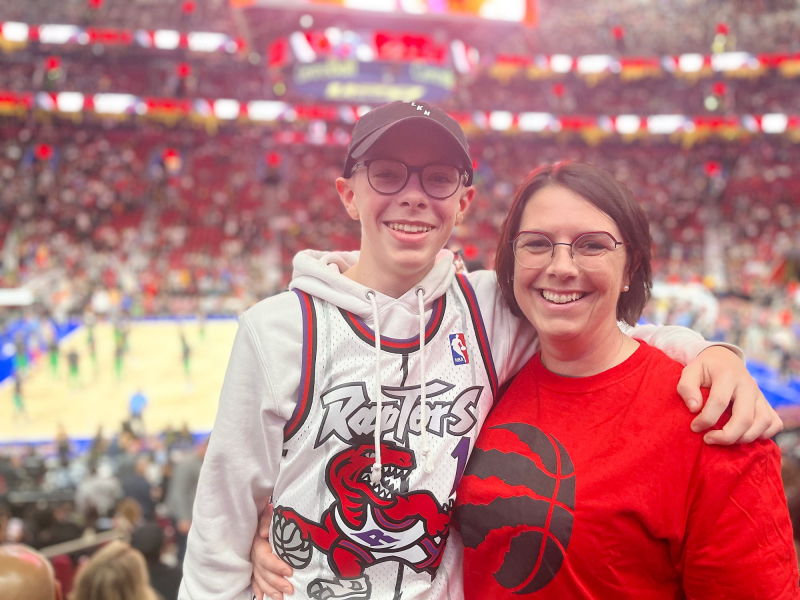 Quebecers did not hesitate to drive long hours to cheer on their idols yesterday at the Bell Centre.

Quebecer Khem Birch (in the middle) was sat on the bench for the Raptors in the first quarter, but finished his night's work with four points, four rebounds, two assists, a steal and a block in 14:15 of play.

« We traveled five hours, but it was worth it! » enthuses Maude Lavoie, originally from the Bas-Saint-Laurent region.

To please her son Eliott, this mother did not hesitate to pay $1,200 for two tickets.&nbsp ;

“I decided to splurge because it's a once-in-a-lifetime opportunity to see an NBA game. My son is in heaven, it's my greatest gift. »

In the aisles of the Bell Center, filled to the roof, many teenagers had made the trip.

” It's a dream come true, I have chills, marvels Antoine Groleau, a native of Lavaltrie, in Lanaudière. I knew the players were tall, but in real life, they look huge to me! »

Canadian goaltender Carey Price and forward Paul Byron, both injured, did not accompany their teammates to Detroit, instead attending the basketball game at the Bell Center.

Other basketball fans, not so young, also attended their first NBA game.

« How is it possible not to have an NBA team here, look at the atmosphere! launches M. Dagenais. Investors need to be told to wake up. The room is packed tonight [yesterday], the public is crazy. These kinds of events show that Montreal is a basketball stronghold in Canada.

Christian Koloko made a basket that seemed easy yesterday during a preseason game between the Raptors and the Celtics in Montreal.

But for Antoine Groleau, the arrival of the NBA in Montreal would not necessarily be a good thing.

“&nbsp ;Having only one team in Canada, with the Raptors, adds exclusivity, he thinks. The Raptors have an entire country behind them. Even if it makes us dream, having games every weekend in Montreal would remove the rare side of the event. »

Kelly Simmons, from Saint-Constant, on the South Shore , to attend the game with his children, is not of this opinion, and would not hesitate to come every weekend if the NBA settled in the Quebec metropolis.

“&nbsp ;The more games we have here, the better! launches this mother. We are real fans, we watch all the matches together on television. I stayed up all night to get seats for my kids! ”