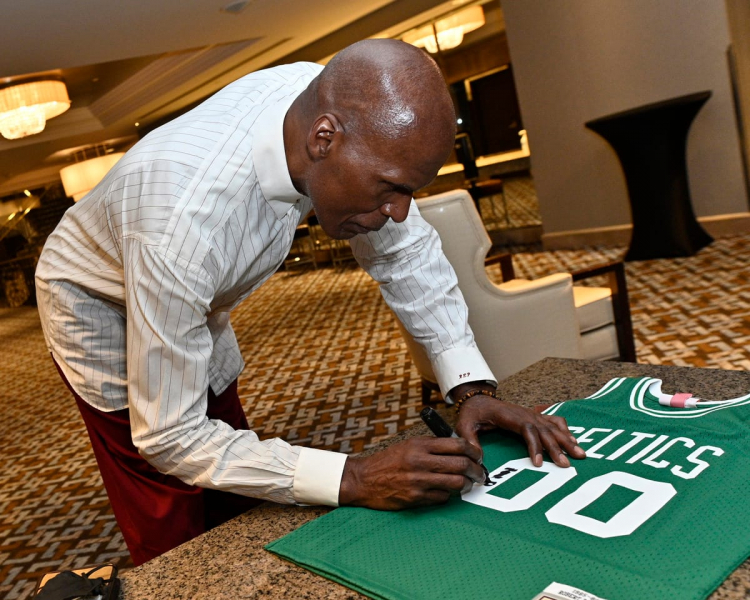 The Boston Celtics are in Montreal and they will have one of the legendary club's great legends, Robert Parish, in their corner during the preseason game scheduled for Friday night at the Bell Center against the Toronto Raptors.

In all simplicity, it was possible to meet Parish, a 7ft giant. 1 in., Thursday afternoon, at a downtown hotel. A member of the Basketball Hall of Fame since 2003, the 69-year-old obviously ranks behind his Celtics. However, he explains his presence in Montreal by his ardent desire to help promote basketball around the world.

“I love basketball, unlike hockey and baseball,” he admitted during the interview. I know that the Bruins and the Canadiens often had good teams, at a time when I played with the Celtics [between 1980 and 1994]. We shared the Boston Garden with the Bruins. I only have one complaint about that: sometimes our wooded lot got slippery with that ice underneath, especially in the spring. It was like walking on icy water.”

Nothing to develop his love for hockey. All in all, the ex-athlete won three championships with the Celtics (1981, 1984 and 1986) while the organization totaled 17, tied with the Lakers [Editor’s note: Minneapolis and Los Angeles] in history of the NBA. Which is the more legendary of the two formations, according to him?

“In the 1980s, it was the Lakers. During this period, they won five championships, against three for us, he decided, without hesitation. It is victory and success that form the legacy of a club.”

Canada on the map

In Montreal, Parish will see the Raptors, who he says are a big part of the rise in popularity of basketball in Canada in recent years. The sale of tickets is also the joy of resellers these days in Quebec. And that was for a preseason game.

“When the Raptors won their championship [in 2019], they put Canada on the map in the basketball world,” he said. And the popularity of the sport has grown steadily in the country ever since.”

Parish didn't appreciate the reaction of some Toronto fans when they cheered on an injured opponent in the Finals, Kevin Durant of the Golden State Warriors. However, looking back, he says he is happy for the Raptors since their victory was good for basketball and for parity in the league. The Warriors and the Cleveland Cavaliers had indeed met in four consecutive finals, from 2015 to 2018.

Rodman and his tutu

Among his old memories, the Celtics legend recounted the day Dennis Rodman arrived at a Chicago Bulls practice wearing a tutu. It was with this team, led by Michael Jordan and Scottie Pippen, that Parish concluded his career with a fourth championship, at the end of the 1996-1997 season.

“He had a personality as colorful as his hair,” Parish summed up, laughing out loud, calling Rodman a really good teammate.

The interview was about to conclude when Parish was asked to autograph a Celtics jersey. But why the number “00,” he was asked?

“When I was young, in Louisiana, I was the worst player on my team, literally. I had this number 00 and I was nicknamed “double nothing”. It was appropriate because I was really bad…”

Today, Parish still holds the record for the most games played in the NBA in the regular season, with 1,611, ahead of Kareem Abdul -Jabbar (1560).

A foundation for Chris Boucher

Having had to be absent from this trip to Montreal, Quebec player Chris Boucher nevertheless took advantage of Thursday evening to virtually launch his own foundation called “SlimmDuck”.

The Toronto Raptors color holder wishes to give young people the chance to increase their opportunities in sport and education. Boucher intends to be particularly involved in underprivileged areas, in Montreal and Toronto.

The Raptors have also lost their two most recent preseason games, but if the past is any indication of the future, they could well conclude their preseason schedule with a victory in Montreal, this Friday night, against the Boston Celtics.

Since the debut of the “NBA Canada” series 10 years ago, the Raptors have played four times in Montreal, savoring victory at every opportunity. They beat the New York Knicks in 2012 and 2014, then the Washington Wizards (2015) and the Brooklyn Nets (2018).