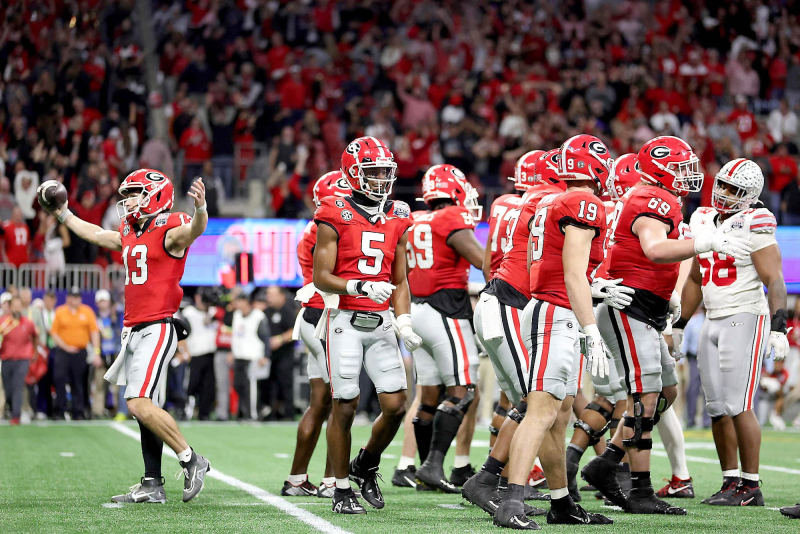 TCU's Horned Frogs weren't in the top 25 at the start of the season. Each week, their legitimacy was questioned despite the improbable victories. Now this program finds itself in the NCAA National Grand Final on Monday night against the mighty Georgia Bulldogs.

There may be no miracles in this world. , but what TCU has achieved in the American college football scene is the closest thing to it.

For the Fort Worth, Texas-based university, this is a once-in-a-lifetime opportunity to win a first national title since 1938. The last unranked team at the start of the season to accomplish the feat remains Georgia Tech, 1990.

That's how fairy tales don't often end so well in the cruel world of football as they do in books!

Before the season, most predictions sent the Horned Frogs seventh in the Big 12 Conference. Yet they became the first since 2009 in that unloved conference to finish the regular season with a 12-0 record. They lost in the conference final to Kansas State, but nothing to dislodge them from third place on the NCAA committee, which gave access to the playoffs.

“Skillfully heart,” they won five games this season in which they trailed at the half.

TCU, so it's the beautiful story, but Georgia is the giant in the room.

The Bulldogs won their first national title since 1980 last season, but they've been big gamers for several years and have the potential to become the next dynasty in American college football.

On Monday, Georgia will try to become the first program since Alabama, in 2011 and 2012, to win back-to-back national titles.

However, last year, some imagined the program losing feathers with the departure of five defensive players in the first round of the NFL draft. The standard remained high for this fierce defense, which only slipped from first to fifth in the nation in points allowed.

The armor isn't flawless though. In the semifinals against Ohio State, this fearsome defense gave up 41 points, after giving LSU 30 in the SEC Conference Finals.

TCU's offense is clearly not Ohio State's, but their 41.1 points-scoring average this season has ranked them fifth in the nation. Of course, keep in mind that defensive talent and the Big 12 conference rarely mix, which partly explains TCU's inflated offensive stats.

At the end of the day, Georgia has too much big-game experience. games, high quality players and a defensive wall to stumble upon.

Except that TCU must have crashed in the face since September and it still hasn't happened. On paper, the Frogs don't really have a chance of winning, but that's why games are decided on the field.

When a team reaches the national championship, it does not matter whether it is underdog or favorite, it is because several of its players stand out. This is the case at TCU and Georgia with several young people who will graduate in the NFL next year or continue to assert themselves even more in the NCAA. Here are some players to spy on in this duel.

The veteran quarterback defied all odds last year when he became the starter en route to the national championship. He's 25 and 5'11″, which isn't ideal for the NFL, but his propensity to go for the big plays at the right times is undeniable. He finished ninth in the nation with 3,823 yards. In the fourth quarter in the semifinals against Ohio State, he threw two touchdown passes.

The athletic tight end on the pitch is hard to miss. In his second season, Bowers caught 56 ​​passes for 790 yards and six touchdowns. That's less than last season's 13 touchdowns, but he's still Georgia's best weapon even though he shares the field with another excellent tight end, Darnell Washington, whose presence is uncertain. Bowers will be eligible for the draft next year.

Jones is Georgia's left tackle and is one of their players who will definitely be considered in the first round of the upcoming draft. He concedes very little pressure and hasn't allowed a quarterback sack in 14 games as a starter this season. Many see him as a guard in the NFL, but in this game, he will be essential in protection on the end of the front.

After a sluggish start to the season and an injury, the Bulldogs' powerful defensive tackle is back to full glory. In the six weeks leading up to the semifinals, he led with 24 tackles, including 6.5 for losses and three quarterback sacks, in addition to forcing two fumbles. Strangely, it was more wiped out last week, but it will rebound on Monday. He will be a top 3 pick in the NFL this spring.

Ringo, a cornerback, was a hero in the National Finals last year when he scored a touchdown late on an interception return against Alabama. He is expected to be regularly pitted against Frogs number one receiver Quentin Johnston. Ringo struggled in the semifinal against Marvin Harrison Jr. and he will have to pull himself together. He is tipped as a first-round pick this spring.

Mirroring TCU's season, quarterback Max Duggan exploded out of nowhere. He didn't even start the season as a starter, but quickly established himself by accumulating 3,546 yards and 32 touchdowns. He also used his legs with 461 rushing yards and eight additional touchdowns. Duggan won't be a high draft pick, but he could end his college career in a big way.

One of the players who contributed to Max Duggan's unexpected outbreak is his prime target, receiver Quentin Johnston. He will definitely be the best wide winger on the field. At 6 4 in, the future first-round pick is impressive, as is his average of 19.2 yards per reception in three seasons at TCU. Considering the Georgia secondary just gave up six plays of 24 yards or more at Ohio State, he will be a key player.

Running back Kendre Miller is a big question mark for this game. Injured in the semi-final against Michigan, he did not finish the game. His presence is uncertain and he has been sublime this season with 1,399 rushing yards and 17 touchdowns. If he is absent, Emari Demarcado (622 yards, 6 touchdowns) will take over. Georgia has given up just 2.9 yards per carry this season.

The linebacker is the general of the defense at TCU. He moves a lot on the field and he has a flair for the big play, like his touchdown on an interception return against Michigan in the semifinals. During the season, he had 14.5 tackles for loss, including 7.5 sacks, which shows his skills on the blitz. He should contribute pass coverage, especially against Brock Bowers.

Defensive lineman Dylan Horton should be involved in the one of the interesting battles of the game, against blocker Broderick Jones. He seems on the rise in the last few weeks with two sacks in the quarterfinals in the conference and four more sacks in a dominating game in the national semifinals. If there's anyone to upset Stetson Bennett's rhythm, it's Horton.