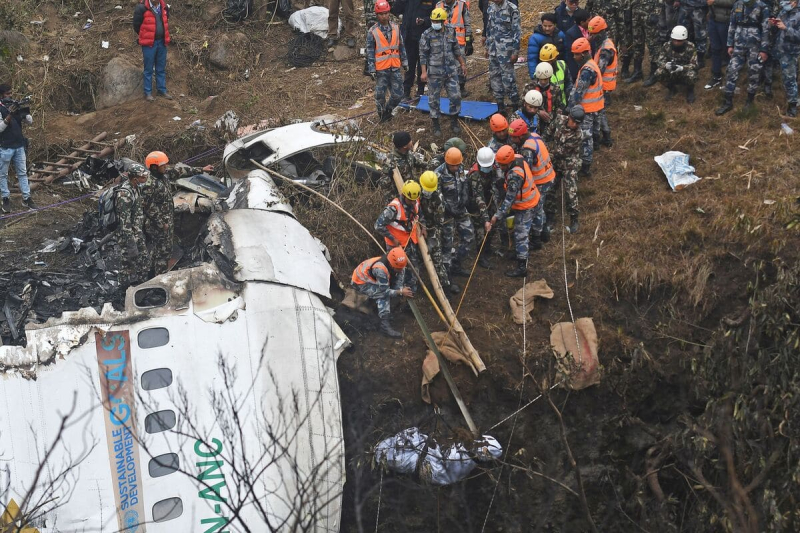 The history of Nepal has been marked by a series of air disasters due to a complex topography and an unstable climate, which make piloting difficult for the most experienced, but also human failures.

After Sunday's worst accident in the Himalayan nation for 30 years, AFP examines the reasons for so many air disasters in Nepal:

“It is very difficult for any pilot to fly in this part of the world. Some planes have to be specially designed to land at such altitudes,” he told AFP.

Nepal has eight of the 14 highest peaks in the world, including Mount Everest, making it a popular destination for tourists and mountaineers.

“There are very strong winds. The weather changes quickly, so I'd say it's probably one of the riskiest places in the world to fly, just because of the geography, the weather and all the challenges that come with that.” Waldron, Asia Editor, Singapore, of industry specialist journal FlightGlobal.

Nepal has some of the most remote and complex runways in the world, flanked by snow-capped peaks including the he approach is a challenge for even the most seasoned pilots.

Poor maintenance of equipment and lax enforcement of safety regulations weigh on the Nepalese air transport sector despite international recommendations.

The European Union has banned all Nepalese carriers from its airspace for security reasons.

According to Shukor Yusof, Nepal has “a rather questionable track record” when it comes to aviation safety.

“Judging by this track record, it’s clear there’s plenty of room for them to improve,” he added.

The expert describes the ATR (Airbus) plane which crashed on Sunday as “a very, very reliable workhorse that can operate in difficult conditions and terrain”.

On the other hand, Greg Waldon told AFP that watching a video showing the last moments of the flight, the plane seemed to him to be undergoing a “wing stall”, that is to say that a wings suddenly no longer support the aircraft's load.

Nepal has performed poorly in accident investigation, in an audit by the Civil Aviation Organization (ICAO) last year.

According to Jakarta-based aviation consultant Gerry Soejatman, ICAO found that authorities in Nepal did not exercise adequate stringent control and “lack the capacity to effectively enforce” regulations and standards.

“It poorly adheres to ICAO guidelines for accident investigation, which is essential to determine problems, provide recommendations to eliminate them and prevent future accidents,” he explained to AFP .

In 1992, a Pakistan International Airlines aircraft crashed on approach to Kathmandu killing all 167 passengers, the deadliest air accident in the country's history.

The The most recent air disaster dates back to the crash of a Nepalese company Tara Air last May, in which none of the 22 passengers, 16 Nepalese, four Indians and two Germans, survived.

Control of air traffic lost contact with the twin-engine Twin Otter shortly after taking off from Pokhara heading for Jomsom, a popular destination for climbers.

Since then, the authorities have tightened the regulations, the planes being only allowed to fly in favorable weather conditions throughout the journey.

As of March 2018, 51 people were killed and 20 others were seriously injured in the crash of an American Bangla Airlines plane near the international airport of e Kathmandu.