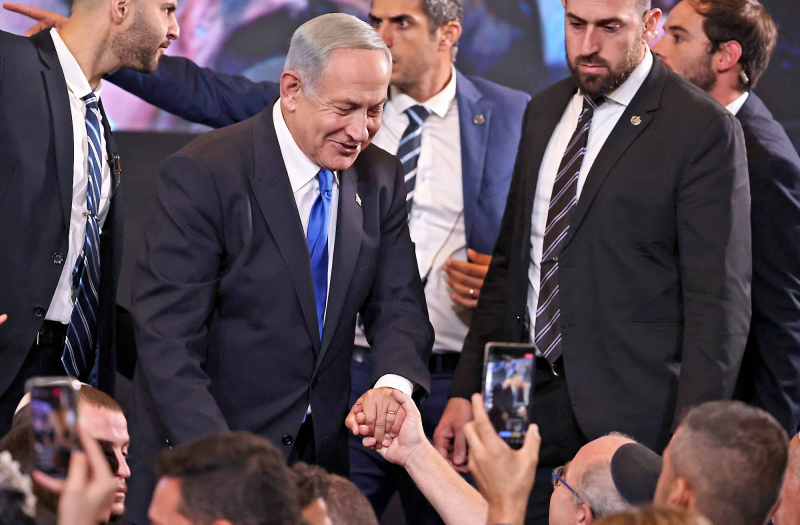 As of this writing last night, ex-Prime Minister Benjamin Netanyahu's bloc appeared to be heading for victory with a narrow majority of seats, according to exit polls.

For the fifth time since 2019, Israelis have participated in elections in the hope of extricating the country from the political impasse that has paralyzed it for three and a half years.

The proportional electoral system gives small parties the ability to force large parties to bend to their will to ensure for their support.

And like everywhere in the world, the personal ambition of politicians often trumps the common good.

The election was widely seen as a vote for or against him. Such an outcome would mark a dramatic comeback for Netanyahu, who was ousted from power last year after a 12-year reign. He hoped to return there to avoid his trial for fraud, breach of trust and corruption.

He enjoyed the support of far-right provocateur Itamar Ben-Gvir and his party, Otzma Yehudit (Jewish Force). He was found guilty of inciting racism and supporting the Kach group – of which he was once a member – which is on Canada's list of terrorist organizations. Ben-Gvir is on the way to becoming a key player in Israeli politics.

Although it does not have a majority, Benjamin Netanyahu's party, the Likud, remains the most important in the Knesset, which has 120 seats.

If the trend continues

Netanyahu's bloc, which in addition to far-right fanatics includes two ultra-Orthodox Jewish parties, is therefore on track to achieve the 61 seats needed to form the government. The centrist and secular bloc led by Yair Lapid would only need four to five seats to stay in power. Four seats are projected to Arab parties that could support him. Will Netanyahu's fate depend on the voter turnout of Israeli Arabs who make up 17% of the population?

If Netanyahu's victory is confirmed, the most extremist government in the history of Israel will be in power. Ben-Gvir, who is likely to have important responsibilities in his cabinet, has called for the creation of a ministry to encourage 'enemy' Arabs with Israeli citizenship to emigrate and he called for an end to the independence of power judiciary.

Exit polls can be wrong, especially when it comes to close contests like here. Official figures, to be announced on Friday, could still produce a different outcome.

Elections in Israel almost never result in clear victories. They often result in weeks – even months – of negotiations to form a coalition government.

We will see if the era of paralyzing political deadlocks will continue with a sixth election, possible from the next spring.