By Quentin Piton Journalist Series – Cinema Journalist specializing in series, cinema, but also anime and manga. Spends his time dreaming of Emma Watson, considers Olivier Giroud the GOAT and refuses to speak with those who are against the absolute truth which is: How I Met Your Mother is a better series than Friends. August 22, 2022 will be a sad day. The reason ? It is on this date that one of the most demanding and creative series of the 2010s will leave the Netflix catalog, namely: Mr. Robot. A real disappointment as this techno-thriller worn by Rami Malek is a gem.

On June 24, 2015, Sam Esmail turned the world of series on USA Network upside down. On this date, the creator indeed unveiled the first episode of Mr. Robot, this breathtaking techno-thriller carried by a five-star cast, starting with Rami Malek (Elliot) and Christian Slater (Mr. Robot). The kind of fiction that cracks your head as much by its quality as by what it imposes on you.

On the program of this series which ended in December 2019 at term of 45 episodes spread over 4 seasons? Mr. Robotfollows the story of Elliot Alderson – a genius computer scientist in New York who works for Allsafe Security. Both depressive and paranoid, he takes advantage of his hacker talents to play vigilante online in his free time. It is then that he meets a mysterious person who calls himself Mr. Robot and who wishes to recruit him within his Fsociety, Anonymous style. The goal ? Save society by taking on the biggest corporations in the world.

>> Netflix news: the best comedy on the platform returns for its third season <<

A creative and demanding techno-thriller

At first glance, Mr. Robotis nothing very original and even seems shamefully cliché. Evidenced by the character of Elliot based on a large hood on the head, face as white as a vampire from staying indoors and inability to communicate normally with others. And yet, this series offers us a fascinating and complex dive into human psychology and the dark side of our society.

Driven by stunning acting (Rami Malek notably won the Emmy Award for best actor), by disconcerting production with original framing that makes us see the story differently and by a unique atmosphere, Mr. Robot is a series that clearly does not leave anyone indifferent.

Like a Breaking Bad/Better Call Saul, it has its own identity which makes it dictate its own rules of the game. Translation? If the creativity that surrounds his story is his strong point, it can also be his weak point according to the spectators. Mr. Robotis not a series to be binge-watched, but to be savored and which demands our attention to better optimize our thinking behind it. Because yes, while the theories on what we watch are part of this universe, our ability to analyze what is told is regularly tested. It may seem exhausting, sometimes give us the impression of not understanding everything, but when we play the game, the result is even more enjoyable. 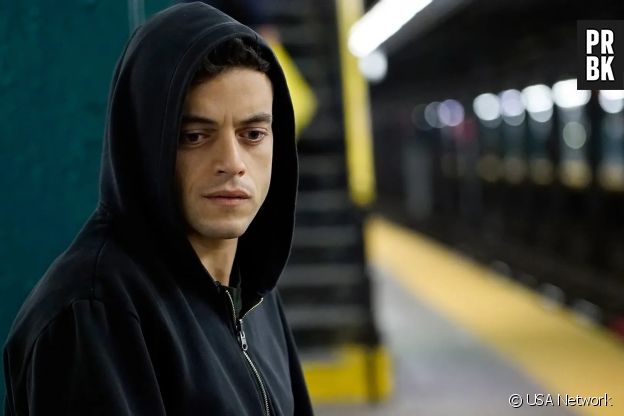 Unfortunately, if you haven't tried your hand at the series before, you have very little time left to do so. The reason ? On August 22, Mr. Robot will (temporarily?) disappear from the Netflix catalog. In other words, you only have a handful of days left to enter Elliot's world and come back changed forever.