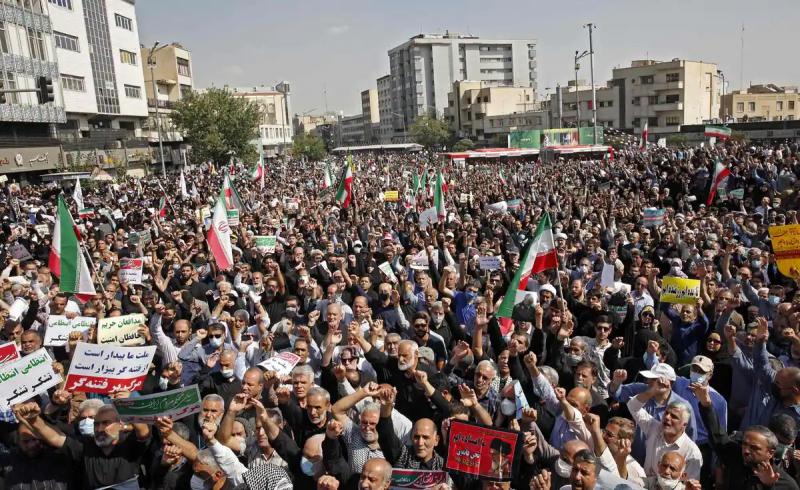 AFP-verified videos posted on social media show a man in military uniform firing at protesters , in the region of Shahre Rey, in the south of the Iranian capital.

Still other footage shows protesters running outside the Park Royal hotel in northern Tehran, on a street with scenes of chaos and several localized street fires. At least eight shots of undetermined origin are heard.

22-year-old Mahsa Amini was arrested on September 13 in Tehran for “wearing inappropriate clothes” by vice police, responsible for enforcing the dress code of the Islamic Republic. His death, three days later in hospital, led to demonstrations in the main cities of Iran, including the capital Tehran.

State media on Thursday reported the deaths of 17 people in the protests. But the toll is likely to be much heavier, with the Oslo-based opposition NGO Iran Human Rights (IHR) reporting on Friday at least 50 dead in the security forces' crackdown on protests which, according to this source, have taken place in approximately 80 cities over the past week.

Police arrested an unknown number people, Iranian media reported. Among them are activist Majid Tavakoli and journalist Nilufar Hamedi, according to those around them.

The most viral images on social networks are those where we see Iranian women burning their headscarves. In Iran, women must cover their hair and are not allowed to wear short or tight coats.

Iranian President Ebrahim Raisi on Thursday promised an investigation into the death of the young woman, while specifying that the medical examiner had not reported abuse on the part of the police, which the demonstrators dispute.

Faced with the protesters, described as “counter-revolutionaries”, “rioters” or “plotters,” the authorities retaliated by staging their own protests after Friday prayers.

At the call of an organization responsible for organizing official events, thousands of people marched in several cities in Iran, including Tehran, Qom (north) or Isfahan (center).

In Tehran, hundreds of people, including women in chadors, demonstrated with flags of the Islamic Republic, placards of support and thanks to the forces of the order, according to state television.

“Death to the plotters”, “Advocating the end of the veil is American policy”, could be heard as slogans.

Praising the “efforts and sacrifices of the police”, the Guardians of the Revolution, the ideological army of the Islamic Republic, for their part assured that the recent “conspiracy of the enemy” would be “doomed to failure”.

The authorities had reported on Thursday of the death of five members of the security forces.

While NGOs abroad denounced a “brutal” repression of demonstrations in Iran, internet connections were still very disrupted there on Friday, with the blocking of WhatsApp and Instagram, while Washington announced measures “to support the 'access of Iranians to the free flow of information'.

On Friday, Washington announced the lifting of certain bans on trade with Iran, in order to allow technology companies to provide platforms and services allowing Iranians to access the internet.

The announcement comes days after SpaceX owner Elon Musk said he intended to seek an Iran sanctions waiver from the US administration to offer internet connection services there via its constellation of Starlink satellites.