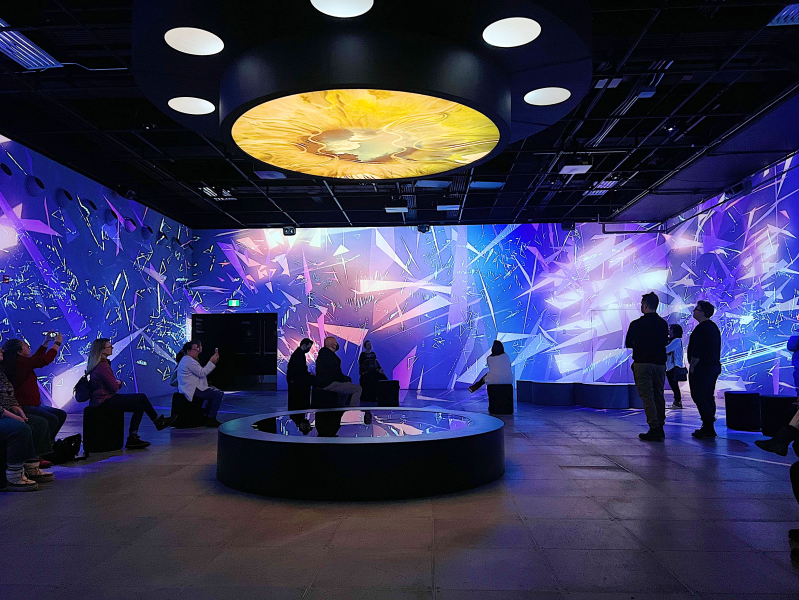 Transformed: the new OASIS immersion experience presented at the Palais des Congrès de Montréal lives up to its name, because it's hard not to come out transformed . By exploding on its walls content initially imagined for virtual reality headsets, the experience takes on a new meaning that is now experienced surrounded by others.

On the eve of celebrating its 2nd anniversary, OASIS immersion is offering a fourth experience to visitors ever more eager for moments and out-of-the-ordinary proposals.

Transformedis different by its angle of narrative exploration and its sharing of moments of life lived by real people (and not by characters).

We wander through several large rooms where we take the time to sit down (on benches, in rocking chairs) to listen to these 8 stories of remarkable stories. Stories whose words are supported by moving and enveloping projections.

We are also called upon to wander through certain rooms, throughout the story, while our steps reveal some momentary surprises.

What does this 360-degree out-of-frame experience have in common? The feeling of empathy generated by these eight human stories that we know to be real, which only strengthen the video proposals sliding from the walls to the floor and which sometimes envelop us entirely.

Schizophrenia, mourning, uprooting, slavery, the consumer society, isolation, the anxiety of experiencing a nuclear alert, but also the strength and courage to overcome such ordeals are among the themes addressed in these 8 works (three in French, three in English and two without text). These have been selected around the world for the power of their message and have been adapted and redesigned to move from experiences imagined in virtual reality to immersive ones. A great first that makes the OASIS Immersion team proud, seeing the experience as a tribute to the virtual reality industry.

Without giving too much away, we can say that a research on mourning (with the voice of the French actress Marion Cotillard) disturbs with its climax in shards of glass, that that on urban culture stuns and makes aware that it is possible to feel alone in a crowd and that the subject of mental health has never been better exposed than through the work called Goliath in which a young man who loves video games recounts his first crisis of schizophrenia. < /p>

The audio diary of a man losing his sight just before the birth of his son and the other stories of resilience also find new power, thus supported by the screenings.

The Transformed experience of OASIS immersion is presented at the Palais des Montreal Congress. Tickets and timetables: oasis.im/transforme/