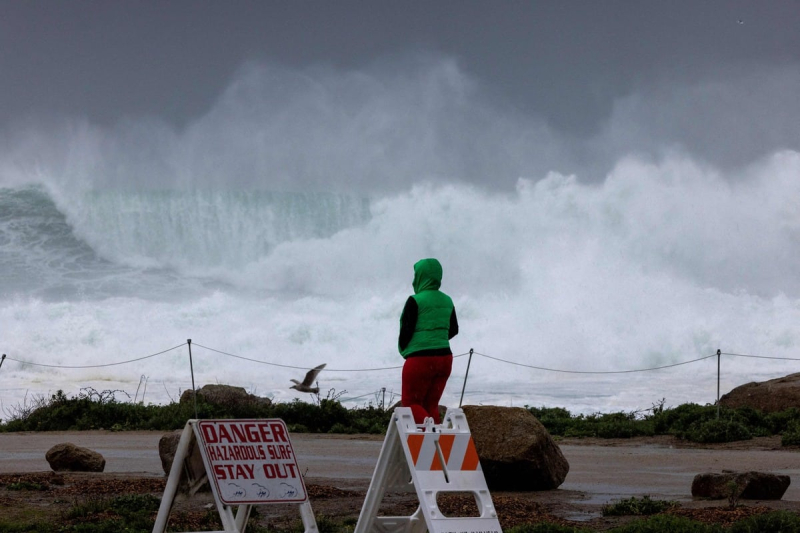 A new storm began battering California on Saturday morning, which could experience “catastrophic flooding” after three weeks of unprecedented rainfall that has already killed at least 19 people.&nbsp ;

A new low-pressure system should “approach the coast on Saturday morning and move inland during the day”, causing floods and landslides, the US weather service (NWS) predicted overnight.

The Monterey Peninsula could be cut off from the world by rising seas, and the entire nearby town of Salinas, which has 160,000 residents, could be flooded. “The entire Lower Salinas Valley will experience catastrophic flooding,” blocking many roads, the NWS warned.

Kelley O 'Connell, a resident of the affected area, is worried after a levee burst near her home.

“If they release the water from the dams or if it rains more, we're only a field away,” she told the San Francisco Chronicle, while shielding her home with sandbags. .

Several areas in the region are under evacuation orders, and the affluent city of Monterey, on the Pacific coast, could find itself cut off from the world if the roads are cut off by the waves.

“The Monterey Peninsula could become an island” because of the flooding, local sheriff Tina Nieto warned, asking residents to prepare to avoid being trapped by the floods.

Local John Guru stored four days' worth of provisions in his house and two days in his car in case he was trapped on the road. “I don't know how serious this can get,” he told the Monterey Herald.

A series of storms have battered California in recent weeks. Short lulls barely allow authorities to clean up the mess or restore power.

And it's not over, according to meteorologists.

A new 'atmospheric river' , that is, a narrow band in the atmosphere carrying huge amounts of moisture from the tropics, is expected on Monday, a public holiday in the United States. It will bring “new waves of extreme precipitation”, warns the NWS.

One meter of snow

In the mountains, this precipitation translates into heavy snowfall, with more than a meter expected over the weekend in the Sierra Nevada. Enough to make travel dangerous or impossible. An avalanche warning has also been issued.

Mammoth mountain in California is closed today because of TOO MUCH SNOW. An incredible 420cm has fallen since Christmas with over 4ft or 120cm in just in the last day alone. #Californiastorm pic.twitter.com/NeS5CbPzpZ

At least 19 people have died since this series of bad weather began. In particular, drivers were found in their cars trapped by the waves, people were struck by falling trees, a couple was killed by a landslide and bodies were washed away by the floods.

The California is used to extreme weather conditions, and winter storms are common. Such a sequence is on the other hand unusual.

While it is difficult to establish a direct link between these series of storms and climate change, scientists regularly explain that warming increases the frequency and the intensity of extreme weather events.

The torrential rains of recent weeks will not be enough to end the drought that has hit this western American state hard for two decades, however, according to specialists.