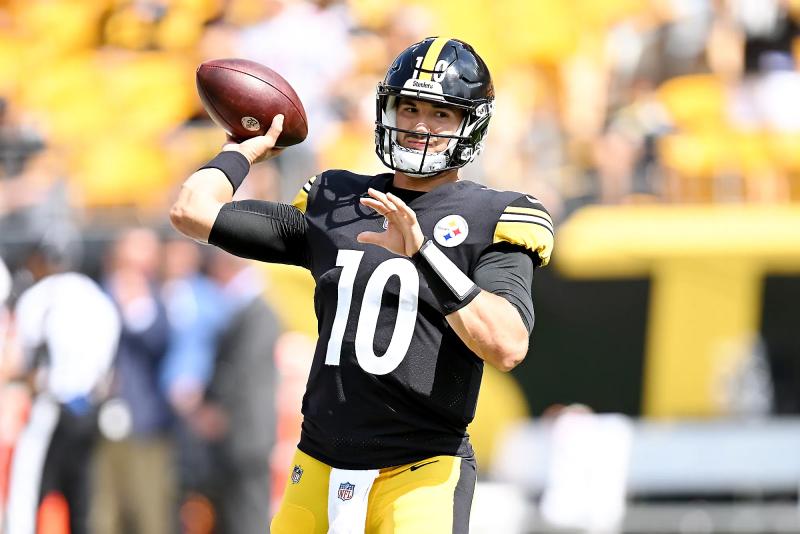 Two short weeks… That's all it took for the first quarterback controversy to erupt, courtesy of the Pittsburgh Steelers.

< p>The Steelers, in action Thursday night against the Browns in Cleveland, are not used to this kind of scenario. Ben Roethlisberger joined in 2004 and was their go-to man for 18 seasons until his retirement a few months ago.

In office since 2007, head coach Mike Tomlin is one of the few who have experienced so much stability at the quarterback position in recent years.

Before the season, he opted for Mitchell Trubisky and, despite two unreassuring departures, he continues to press it.

How far is legitimate to wonder, knowing that in April the Steelers opted for their quarterback of the future in Kenny Pickett, with the 20th pick in the draft.

Pickett won a legion of fans in the Pittsburgh market after leading the Pitt Panthers to last season's ACC championship in the NCAA. Since then, he has looked very good in preseason games, so much so that Steelers fans were chanting his name last Sunday when the offense was stalling.

Tomlin will quickly feel the temperature rise if the attack does not take off against the Browns. In such a short week of preparation, it would have been unnecessarily risky to throw young Pickett into the fray, on the road. before the next game, at home, against the Jets.

In Trubisky's case, his 52 NFL starts have amply demonstrated his aversion to risk. This season, his anemic average of 5.1 yards per attempted pass is the lowest of his career. The Steelers have just two touchdowns in two games and have only visited the pay zone four times.

Obviously, Trubisky shouldn't be the only one to blame. Since offensive coordinator Matt Canada took over last year, the Steelers' offense has rarely been so conservative, despite the presence of offensive weapons such as Najee Harris, Chase Claypool, Diontae Johnson and Pat Freiermuth.

In fact, Claypool and Johnson weren't shy about pointing the finger openly after Sunday's loss. really is on a tightrope. He must quickly pull himself together against the Browns, who have just given up 309 yards and four touchdown passes to veteran Joe Flacco. It's the only way to save his position, at least temporarily…

Over the years, the Steelers have excelled in the art of finding and developing excellent young receivers. Their most recent take in the second round of the draft, George Pickens, could go down this path. He's only claimed two receptions for 26 yards this season, but he's looked good throughout training camp, and the Steelers are pinning a lot of hope on him. At 6'3″, he could become a prime target in the end zone.

The State of Forces in the NFL – Week 3

In quick succession, the Bills brutally annihilated the Rams and the Titans by throwing them in the trash like old pants with holes in them. The road won't always be so rosy, but for now, the demolition derby is downright impressive. Buffalo cookouts will be epic.

The Chiefs kept their clean record, but Patrick Mahomes had a weird game with several risky passes that should have ended in interceptions. Another youngster contributed to the victory, seventh-round pick cornerback Jaylen Watson with a big interception.

The Bucs had to draw on their reserves to defeat the Saints, who were without receivers Chris Godwin and Julio Jones, in addition to left tackle Donovan Smith. Even his reservist Josh Wells fell in battle. Cole Beasley arrives as reinforcements.

Quarterback Jalen Hurts shows huge signs of progress as a setter. He became Monday the first quarterback to amass more than 300 yards by completing more than 80% of his passes with a crop of two rushing touchdowns. Impressive, as is the defense.

The Rams played dangerously with fire against the Falcons. Matthew Stafford added two interceptions to his record. He already has five this season. A victory is a victory, but something is wrong with the Rams, who do not display their aura of champions.

Quarterback Justin Herbert ended the game in pain after sustaining a rib injury. Fortunately, it seems that it is not too serious and it is even possible that he plays at the end of the week. Rare talents like him, we want them every week.

The Packers have rebounded well after looking poorly in Week 1. Since Matt LaFleur is the pilot, his team is 10-0 after a loss, with an average margin of 14.3 points. The running game did the job against the Bears with a terrific Aaron Jones.

Ahead of his phenomenal game on Sunday, Tua Tagovailoa claimed three touchdown passes that went at least 20 yards through the air. Against the Ravens, he scored as many. Do not expect such aggression to become his style, but he is capable of it.

What sank the Ravens face the Dolphins, in addition to their tertiary which was destroyed, it is the absence of production on the ground. Lamar Jackson ran well, but rusher J.K. Dobbins was limited to 28 yards on 14 carries. Twice on fourth downs, even Jackson was bottled up.

Poor Trey Lance! The young quarterback has only had one start in 2020 in the NCAA due to COVID. He only got two starts last year in his rookie season in the NFL. Then his current season will have lasted only 73 minutes, after a broken ankle.

The more the game progressed in Philadelphia, the more Kirk Cousins ​​seemed to throw blindly. When Justin Jefferson is wrong, nothing is right. In two weeks, the Mauves have shown worrying signs of bipolarity, capable of both good and bad.

For the first time in six years, the Giants are 2-0. Be careful before getting carried away, their two victories were acquired against two teams which have still not won. Regardless, hats off to their defence, who have to make do with an injury-ravaged line.

Hail the bravery of Jameis Winston, who played despite four broken backs. Let's not welcome his three interceptions, even if his state of health did not help. Aside from the fourth quarter of Game 1, the Saints' offense produced nothing the rest of the time.

On the final streak against the Bengals, Cooper Rush looked good completing six of his nine assists for 67 yards. On defense, Micah Parsons recorded two sacks for the fifth time in his young career, in just 18 games. What a monster, that one!

After the setbacks of the first week, the Broncos needed all their little change to defeat the Texans. They have again been repeatedly penalized (13 times) and offensive communication is poor. Nathaniel Hackett seems to think the game is going too fast.

The Patriots offense showed signs of life in Pittsburgh, including finishing strong when it chipped away at the remaining 6:33 to extinguish the threat. Every yard was fiercely gained and that's the kind of win the Pats will be looking for this season.

The defense's first game without TJ Watt is cause for concern. The Steelers, for once, did not record a sack against the Patriots. It was the third time it had happened since 2017. Do you believe in chance? Watt was out of uniform in two of those three games.

After a half, facing at the Raiders, the Cardinals looked like the worst team in the league. Then, Kyler Murray stood up. For a quarterback whose leadership has been questioned in recent months, this was the ideal answer, especially without two of his best receivers.

The Bengals allowed six quarterback sacks and the counter now shows 13 since the start of the season. Joe Burrow is therefore the victim of a sack every 7.8 passing games on average this season. At this rate, it will end up in compote in a few weeks.

The Raiders, who held a 20-point cushion at the expense of the Cardinals, were pitiful in the second half. Result: they suffered the worst collapse in their history. On three occasions they had spurned 18-point leads. There is nothing enviable about this new peak.

The time has come to write one of those sentences you never thought you would write, at least not in this century. The Lions are currently one of the most spectacular teams in the NFL. There, it is said. It is often at this moment that a finally praised team falls back into its filthy habits.

We come to think that every time something bad happens to the Browns, we will never see worse. The landing of the last two minutes against the Jets will be hard to beat…until next time. Guess karma strikes after the controversial hiring of Deshaun Watson.

For the second week in a row, Derrick Henry was not a factor. And suddenly, Ryan Tannehill seems to be back to being the quarterback of his past. It was rookie Malik Willis who finished the match in his place. Luckily for the Titans, their division is horrible.

Justin Fields' disallowed touchdown looked good, but this loss doesn't have to be the officials'. The Bears only attempted 11 passes despite trailing most of the game against the Packers. The weakness of the receiving group is obvious.

The Commanders defense continues to struggle. Against the Lions, she gave up three plays over 45 yards. When the offense scores 27 points, the team should do better. This is a problem that is becoming recurring and the eventual return of Chase Young will not change everything.

Since the spectacular first half of Geno Smith and the Seahawks attack, it has been nothing. This offense has not scored a touchdown in the last six quarters of play. The emotion of Russell Wilson's homecoming has passed. We will have to find another source of energy.

Is this the return of “ Sacksonville”? The Jaguars had five sacks and hit Matt Ryan 11 times. They shut out the Colts for the third time since 2017. They are currently first in the AFC South Division. You can't find anything better in the paranormal department.

Phew, the Colts are bad at the start of the season! Their 10 possessions against the Jaguars ended in five clearances and five turnovers. Deprived of Michael Pittman, Matt Ryan completed only five of his 13 passes of 10 yards or more. The defense is looking for itself. Everything is hard!

The Texans still don't have a win, but must be excited about how their defense holds up. On offense, however, rusher Dameon Pierce gained 4.6 yards per carry but only had 15 carries. You have to involve him more, especially in a close match.

The Panthers had a great opportunity to start their season strong with two beatable opponents. They are 0-2, however, and head coach Matt Rhule's seat is heating up faster than a forgotten cocktail in the sun. Baker Mayfield plays very bad football.

The Falcons have no knew how to exorcise their demons, they who almost completed a comeback when they trailed by 28-3. Reminds you of something? We should think about involving tight end Kyle Pitts, targeted only three times in the first three quarters.