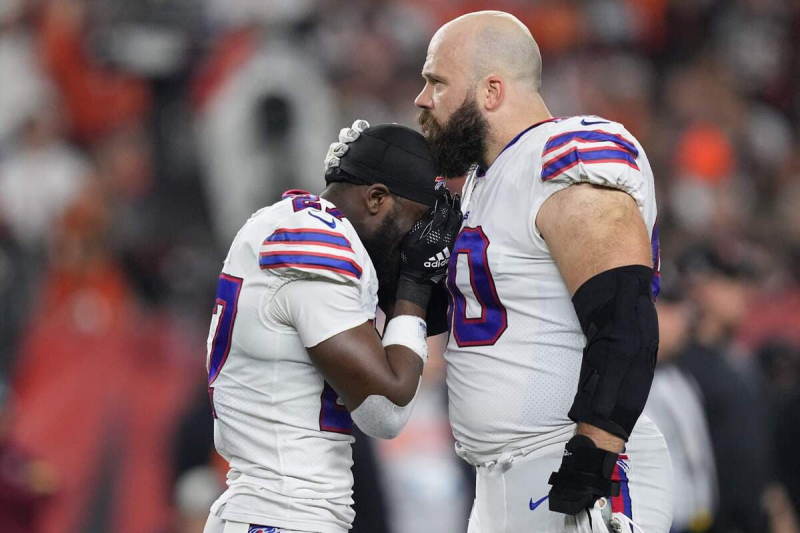 After suffering cardiac arrest on the field following a tackle during a duel between the Bills and the Bengals, Damar Hamlin is still not out of the woods and despite encouraging signs , he remains in critical condition.

The 24-year-old Buffalo Bills safety is still at Cincinnati University Hospital, with his family by his side. Late Monday night, a member of his agency, Jordon Rooney, said his vital signs had returned, but he was still in a tube undergoing various health checks.

Damar Hamlin spent last night in the intensive care unit and remains there today in critical condition at the University of Cincinnati Medical Center.

We are grateful and thankful for the outpouring of support we have received thus far.

In the last few hours, his situation does not appear to have changed, according to what has been made public. His family commented on the events in a press release.

“We want to express our gratitude for the love and support shown to Damar during these difficult times. We are deeply touched by the prayers, kind words and donations from supporters across the country,” the Hamlin family said.

“We also want to recognize the dedication of first responders and medical professionals at Cincinnati University Hospital, who provided Damar with exceptional care. We are grateful to be part of the Buffalo Bills organization. We also want to thank Coach [Zac] Taylor and the Bengals for all they've done.” day, Jordon Rooney appeared on the popular Pat McAfee Showto silence the rumors circulating, without however revealing any news concerning the state of health of his friend and client.

“The last image that people have of Damar is when he was in cardiopulmonary resuscitation. Since then, there has been a lot of speculation. I spoke to make it stop and just to mention that his vitals are at least stable. That doesn't mean we're out of the woods. Otherwise, there is no other concrete update”, he launched.

No recovery this week

The NFL has announced that the duel between the two teams will not be resumed this week.

The league does not anticipate any changes to the schedule for the 18th and final week of the regular season, which will take place on Saturday and Sunday. No resumption date is planned for the moment and it is not excluded that the match will simply be canceled.

“No decision has been made regarding the possible resumption of the match and we have not announced any changes for the weekend matches. We will notify the clubs of any decision,” commissioner Roger Goodell said in a memo sent to the 32 teams.

For his part, Bengals owner Mike Brown said he was proud of the momentum of solidarity demonstrated in Cincinnati.

“It was supposed to be a big night for the NFL and a great showcase for our city. Instead, the human side of our sport has become paramount. At such a time, humanism and love were at the forefront.”

“While the medical staff undertook extraordinary measures, both teams showed respect and compassion, while people in the stadium and across the country showed support for Damar and love for each other,” he said in a message distributed by the team.

Contrary to popular belief, this isn't the first time in the NFL that life support has been required on the field.

< p lang="en" dir="ltr">We're praying for Damar and his family this morning in Tampa. Moments like this put into perspective what it means to play this game we love. Thankful for our communities in Cincinnati and Buffalo for the overwhelming level of care and support I know they'll continue to provide.

On December 21, 1997, Detroit Lions linebacker Reggie Brown required 17 long minutes of CPR treatment. The game had resumed and he has been leading an active life ever since.

On October 24, 1971, another Lions player, catcher Chuck Hughes, also received such treatment, but died. He is the only NFL player to die on the field to date and after the fact, doctors discovered that one of his arteries was 75% blocked.

Earlier this season, in an interview that makes a lot of sense today, Damar Hamlin himself said he savored every moment on the pitch.

“I always cherish those moments. We were in a prayer group earlier this week with our group of defensive backs and I was shaking hands with Dane [Jackson] because you never know if it will be our last day experiencing something like this. You have to cherish these moments”, he mentioned.

How even when everything seems to be going for the best, life sometimes hangs by a thread.