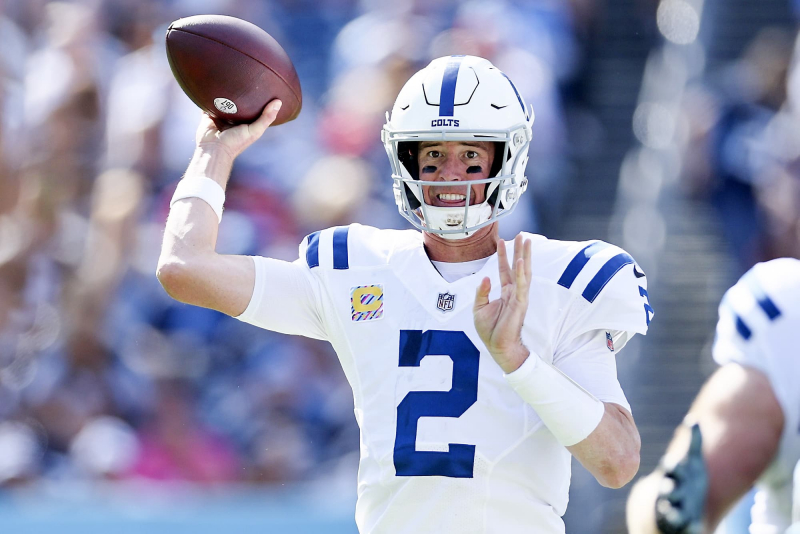 There's no retirement that hurt an NFL team more than Andrew Luck's with the Colts heading into the season in 2019. Since then, it's a real revolving door to the quarterback position on this team and Matt Ryan is the latest resounding failure.

Of course the Colts didn't see Luck's premature and unexpected retirement coming in 2019, but since then, rather than concocting a plan for the future, general manager Chris Ballard and head coach Frank Reich from one short-term solution to another.

There was Jacoby Brissett, Philip Rivers, Carson Wentz, then Ryan.

Brissett never had the makings of a real starter. Rivers arrived in Indianapolis at age 39 and was just passing through. Wentz was nothing like a late thirties, but came with more doubts than certainties.

With Ryan, there was a glimmer of hope, even at 37. The Colts attracted him by touting their strong offensive line and robust ground game. Those promises never materialized and behind a suddenly porous line, Ryan clearly doesn't have the athletic profile to survive.

So it's a miscalculation by the Colts, who traded a third-round pick to the Falcons for seven small starts. >Sophomore Sam Ehlinger, a 2021 sixth-round pick and preseason sensation, will replace Ryan. The bet is bold, knowing that Nick Foles is on board as a reserve and has the experience of having worked with Reich in Philadelphia.

The Colts believe that Ehlinger must be evaluated for real and that his mobility could help hide gaps in password protection.

But who really decides in Indianapolis? Reich seems overwhelmed at this point and he admitted that owner Jim Irsay had a say in the decision. Is the coach still in control? Is there a pilot on the plane?

Ryan threw nine interceptions and fumbled the ball 11 times (including three lost fumbles). Unfortunately, he deserves what is happening to him, despite a great career. Just like the Colts deserve what is happening to them. By dint of applying vulgar bandages to an open wound, the infection has won the sore.

Ravens against the Bucs

In the game of tomorrow night between Ravens and Buccaneers, we opt for the defense of the Ravens which has recovered well lately, in addition to a ground game which will cause trouble for the defensive front of the Buccaneers. Already a fifth setback for Brady and his gang? Misery…

When the Ravens let Marquise Brown slip away in Arizona, they hoped Rashod Bateman would play a key role in the offense. The second-year receiver started the year strong with two touchdowns in his first two games, but since that promising start, he's kept a low profile. He missed two games, but when he did play he was limited to nine receptions in three games. It's way too early to panic, but it would help if Lamar Jackson could fall back on targets other than his tight ends more often.

State of Forces in the NFL – Week 8

The Bills were able to heal a few sores here and there, even if their formation was already healthier than at the start of the course. After their bye week, the Packers, Jets and Vikings await them. It's been far from an easy schedule since the start of the season.

All is well for the Eagles coming back from the bye week. If there's one thing that needs fixing, it's this: so far in the second half of their games, they've scored 35 points and conceded 126. They've avoided the worst, but this situation will end up playing them out. one turn.

The Chiefs erased another 10-point deficit against the 49ers. Patrick Mahomes' record is now 13-9 when he loses by more than 10 points. JuJu Smith-Schuster and Marquez Valdes-Scantling each gained 100 yards. Sign that it clicks between Mahomes and his new receivers.

The Giants are the first team in history to start a season at 6-1 in a context where all seven games were decided by one possession, according to NFL Research. Daniel Jones, quietly, had his fourth comeback in the fourth quarter this season.

Many have questions on the Vikings despite their record. Their last four victories have been recorded by an average of 5.5 points, which is not much. However, they play well in the fourth quarter, which has not been their habit in the past.

Dak Prescott returned, but the script didn't change. It is still the defense that is proof of everything. This season, this unit has conceded two touchdowns in a game just once. Against the Lions, she caused five turnovers in the second half. It makes everyone's life easier.

Joe Burrow became the first quarterback in history to score five games for 400 or more yards in his first three seasons. The offense has been making a conscious effort for two games to emphasize aerial play. It works.

The Ravens came close to escaping another fourth-quarter lead against the Browns. A fumble from runner Justice Hill nearly put the team in another sticky spot, but this time the defense got the job done. A disaster narrowly avoided.

Titans defense is very under -estimated. Against the Colts, she forced turnovers that led directly to 10 points off the offense. In a tight duel, that's all the difference. The defensive front harassed Matt Ryan. It's a fourth straight win for the Titans.

The Jets are 5-2 for the first time since 2010. But then the team lost runner Breece Hall and guard Alijah Vera- Tucker for the season. It hurts, knowing that it was barely the beginning of the flight for this young team. All is not lost, but it is a blow.

One player to watch for the Rams going into the end of the season will be rookie carry Kyren Williams. With an ankle injury since Game 1, the fifth-round pick appears to be a Sean McVay favorite and with Cam Akers looming, he has a spot up for grabs.

Surprise of the year so far here this season! Kenneth Walker became the team's first rookie rusher since Curt Warner in 1983 to gain more than 150 yards with two touchdowns in a game. Receiver DK Metcalf will miss some action, but more fear than harm.

It's a comeback successful for Tua Tagovailoa, who started the game on fire against the Steelers before slowing down considerably. Three of his passes should have been interceptions, but were foolishly dropped by the Steelers defensive backs. Let's put that on rust…

Was the 49ers defense overrated because the attacks they faced weren't great? The Bears, Seahawks, Broncos, Rams, Panthers and Falcons, who were the previous opponents, were clearly not the Chiefs. Besides Nick Bosa, there is not enough pressure.

Cornerback JC Jackson's season is over (knee injury). Receiver Mike Williams (ankle) will miss a few weeks. Year after year, bad luck hangs over the Chargers. Were the leaders of this team torturers in a past life?

For the first time since 2018, the Packers have just dropped three games in a row. It's not like the calendar is going to do them a favor, those who face the Bills on Sunday night. For the first time in his career, Aaron Rodgers is neglected by more than 10 points.

We can clearly talk about the DeAndre Hopkins effect in his first game back with the Cardinals. The receiver caught 10 passes for 103 yards. The defense was opportunistic with two interceptions brought into the end zone. The Cards continue to play yoyo.

Now that the Raiders have won two of their last three duels, it is not impossible that they are going for glory. The Saints, Jaguars, Colts and Broncos will be their next opponents. There's nothing given, but these teams are in trouble.

Even though his team won, the noose continues to tighten around Commanders owner Daniel Snyder. During the game against the Packers, the crowd shouted “ Sell the team! ” (Sell the team) and his wife was booed when presented on the giant screen. Hard on the ego…

It was time for the Bears to make some offensive adjustments and they did it in a good way. Justin Fields' athletic assets have been utilized with 12 designated running games. They scored over 30 points for the first time since 2020.

The Patriots find themselves in the midst of a quarterback controversy. Mac Jones returned, to better return to the bench. Bailey Zappe started on fire, the better to cool down. And to think that a few months ago, the supporters were in awe of Mac Jones, to better denigrate him today.

If the Colts will get up, it will be necessary to succeed at a minimum of big plays. Against the Titans, only one pass play over 20 yards was made. It is also necessary to restore a balance between running and passing. Jonathan Taylor must be the center of the attack, no matter who throws the ball.

For a rare time this season , the Falcons were downgraded, facing the Bengals. They've been exposed wildly against the pass and in a scenario where they have to respond the same, they don't have the talent to do so. In five games, they haven't gained 200 yards through the air.

Before the game against the Cardinals, the Saints had the league's worst turnover differential at -7. They committed three additional turnovers and that differential dropped to -10. There are several injured players on board, but that does not explain this gross negligence with the ball.

You'll have to be patient with rookie quarterback Kenny Pickett, who has thrown seven interceptions in his first four starts. The last Steelers rookie center to do so was Terry Bradshaw, who didn't fare too badly with four Super Bowls.

The Browns are already on life support with a 2-5 record and a schedule that brings them the Bengals, Dolphins, Bills and Buccaneers in the coming weeks. What the Browns do well is run the ball. What they do less well is everything else.

Who needs Christian McCaffrey ? But no ! All kidding aside, after trading their star carrier, the Panthers had their best rushing performance this season with 173 yards. D'Onta Foreman and Chuba Hubbard did the work. Defense too.

The planet was ready to crucify Russell Wilson, but in his absence the attack was just as putrid with Brett Rypien. Maybe Nathaniel Hackett is simply an overwhelmed head coach. It was a sixth game with 16 points or less.

It makes you wonder where the defensive front of the Jaguars, which seemed on the way to becoming a force at the start of the campaign, has gone. After recording seven quarterback sacks in two games, there have only been six since, including two in the last two games.

Casing nothing, the Texans held a three-point lead early in the fourth quarter against the Raiders, but their pitiful run defense caused their deaths. The 988 rushing yards allowed this season is the fourth-worst total in the league.

The Lions offense, which roared in September, purrs into October. Driver Dan Campbell has hinted that a player who loses the ball will not be able to play for his Lions for long. On Sunday, Jared Goff threw two interceptions and committed two fumbles. Make your conclusions.