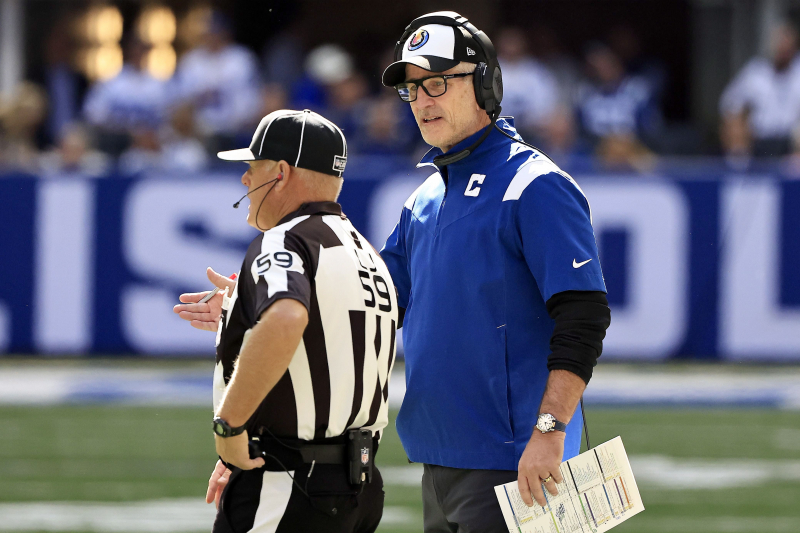 The Colts didn't surprise anyone when they fired head coach Frank Reich on Monday, but the bombshell came when they hired ex-center Jeff Saturday to replace him on an interim basis.< /strong>

Saturday has no coaching background in the NFL or the college scene. His only experience in coaching ?At Hebron Christian Football Academy, a high school in Dacula, Georgia.

Nothing against Saturday, who was an outstanding player and ambassador for the Colts. He has always been recognized as an excellent football head. However, it's quite another thing to lead a team whose management is totally confused.

Some would say that to really stir up the soup, you sometimes have to think outside the box.< /p>

It is still a whole mission that awaits Saturday in his new role. To give an idea of ​​just how haphazard the Colts are going, they'll hand over offensive play calling to Parks Frazier, who held the title of assistant/passing play specialist. Again, we'll go back to CV costs…

An owner who leads the way

The most deplorable part of all this fighting is not that the Colts are giving the keys to the car to inexperienced drivers. Rather, it's the fact that owner Jim Irsay has both hands on the wheel of football operations.

The role of a good owner is to have the right people to take care of all the details on a purely football level, rather than making the decisions themselves. How is GM Chris Ballard feeling right now? Is he still the real master on board?

The Colts have not accustomed us to such a circus in the past. Who knows, maybe Saturday's amazing hire will be the one. Except that this organization, at the moment, gives the impression of sailing without rudder, according to the sensibilities of an untimely owner.

Unable to unearth a quarterback

Reich, for his part, never found a cure for the Colts' crumbling offense. It was becoming difficult to justify him keeping his job.

What sank him, and which risks taking Chris Ballard away too, is the chronic inability to find a solid quarterback since the premature retirement of Andrew Luck. By applying a bandage to an open fracture every year, the most critical position has never recovered for the better.

The first-year receiver meets expectations in Atlanta, he who was chosen early in the first round. He's fourth among rookies with 369 yards, although the Falcons are clearly not a passing team. At 6'4″, he is a big target for Marcus Mariota. With London and second-year tight end Kyle Pitts, the Falcons are banking on two solid pieces for their future, though Pitts seems oddly forgotten this season.

What an addition for the Eagles safety Chauncey Gardner-Johnson, just before the season! He had another spectacular interception on Thursday against the Texans to bring his total to five this season. He had that many in 47 games with the Saints before the trade.

The Bills had their two worst games of the season in rush defense in the past two weeks (175 yards against the Jets and 208 against the Packers). Can't wait for the return of Matt Milano and Jordan Poyer! Tre'Davious White is also closing in.

Patrick Mahomes attempted 68 passes against the Titans, three attempts shy of the NFL record. We will have to see to rebalance the attack, despite the victory. The Titans were the third team to blitz Mahomes on less than 20% of his passes and all three clubs
had success against him.

Seems, according to some wired informants, that the Cowboys tried until the last moment at the trade deadline to get Texans wide receiver Brandin Cooks. Too bad that attempt failed. A duet with CeeDee Lamb would have been nice to see.

What a spectacularly strange season for Mauves! Another victory by a small possession, but still this team is at its best when it counts, in the fourth quarter. In the last 15 minutes of play, the Vikings outclassed their rivals by 70-37 this fall.

In his first game with the Ravens, linebacker Roquan Smith recorded five tackles, including two big ones that deprived the Saints of first downing plays. Veteran Justin Houston is on fire. The Ravens click on offense despite the absence of Rashod Bateman and Mark Andrews.

Geno, Geno, Geno! But there is much more to justify the successes of this team. The defense, shabby at the start of the season, has just limited its last four opponents to less than 300 yards of attack. She has also forced 16 fumbles so far, an NFL high.

Encouraging sign for Zach Wilson in the Jets' victory: although he clearly wasn't spectacular, he completed 72% of his passes, a high for him to date. The running game was to die with the loss of Breece Hall, but gained 174 yards against the Bills.

We were talking about Sunday in these pages from the electric duo of Tyreek Hill and Jaylen Waddle. Both receivers again cracked down on the Bears. Hill already boasts 1,104 yards, the most in league history after nine games. Luckily, since the defense is struggling.

Giants safety Xavier McCkinney fractured a hand on vacation during the bye week and will miss a few weeks. He is an important piece of defense. To lessen the grief, the Texans and Lions are on the menu for the next two weeks.

The time off came at a good time for the Niners, who hope to reconnect receiver Deebo Samuel, running back Elijah Mitchell, fullback Kyle Juszczyk, linebacker Dre Greenlaw and cornerback Jason Verrett this week. More names will be added to this list shortly.

Prior to his mind-blowing game on Sunday, Joe Mixon hadn't rushed for more than 100 yards in almost a year, on Nov. 28, 2021. He finished with 211 yards from the line of scrimmage and five touchdowns, two scores personal. Still, the Panthers were 10th against the run.

An unfortunate trend is sticking to your skin of the Titans, or starting games strong only to end up in a coma. Pass receivers are unproductive. The wide ends have amassed a big zero in the receiving column against the Chiefs.

Greetings to Canadian receiver Joshua Palmer, who helped close the gaps in the absence of Keenan Allen and Mike Williams with eight receptions for 106 yards. The Chargers were embroiled in another surreal endgame. That's how we like them…

Despite his history of impossible comebacks in the fourth quarter, Tom Brady experienced an unprecedented scenario against the Rams. He had never won a game on a touchdown pass when trailing with less than a minute to play. Never too late for a premiere.

The Rams offense continues to sink. This unit did not play a single game in Bucs territory for the entire first half. Eight times she has been taken out of the field after three plays, including three in a row in the fourth quarter. There's Cooper Kupp… and that's it.

The attack sabotaged a good defense performance and the Commanders finally botched a 10-point cushion in the fourth quarter against the Vikings. Quarterback Taylor Heinicke is a walking roller coaster of big plays and disasters.

Several errors sank the Falcons. There is of course Ta’Quon Graham who fumbled his own covered fumble. Then Drake London who had the ball stolen by Khalil Mack. And a touchdown canceled by a penalty. This is how you lose a 10 point lead.

At this point for the Bears, wins and losses matter less than the development of Justin Fields. In this regard, it is happiness for the team and the fans. Fields became the first quarterback since 1950 on Sunday with a game of over 150 rushing yards and three touchdown passes.

Imagine how the Packers' offense has hit rock bottom…Nine ridiculous little points against the league's worst defense! Sorry to bring bad news, but the next three games are against the Cowboys, Titans and Eagles, three top 10 defenses.

The Saints need to end Andy Dalton's reign as quarterback. At this point in his career, he is no longer contributing anything. Already badly affected by injuries, the team saw the jinx continue on Monday with the loss of center Erik McCoy, defensive end Marcus Davenport and linebacker Pete Werner.

The bye week has passed and shortly, we will only talk about Deshaun Watson in Cleveland. The quarterback can return to training next week and general manager Andrew Berry has indicated he will be in his role as a starter on Dec. 4.

With a 3-6 record, the Cardinals are dead last in the West Division, three games behind the Seahawks, with two losses against them. It's already a goodbye for the first place this season and even a place in the playoffs as second ace seems unthinkable.

The Sam Ehlinger experiment is a disaster. In two weeks the Colts have not had any airborne touchdowns. Against the Patriots, they were a big zero on 14 on third downs. The 121 rushing yards was the franchise's worst effort since Week 3…in 1997.

We can only wish the Broncos had found a magic recipe to cure their ailments during their week off. The offense is 31st in the league in runs scored (15.1 per game), 31st on third downs and 32nd in the pay zone.

In the good news for the Jaguars, in addition to the victory, Travis Etienne continues to play with conviction since he is the sole master of the backfield. The first pick of the most recent draft, Travon Walker, applied the pressure five times, a high for him.

The Steelers enter the second half of last season in the North Division. The team hasn't finished last since the divisions realigned in 2002. Their last fourth place was in 1999, when there were six teams in their division.

After firing defensive backs coach Aubrey Pleasant, the Lions had their best defensive game, particularly in the secondary with three interceptions. In their previous seven games, they had just two. The poor man must feel small.

Prior to this season, the Raiders had dropped games despite leading by at least 17 points just five times in 62 years. In eight games this season, this awkward scenario has happened three times. Every time you think they can't go any lower, they outdo themselves.

After two great starts, the quarterback PJ Walker turned into a pumpkin. It was a little predictable and now Sam Darnold is getting closer to a return to the game. Do not believe that he will revive the Panthers. The solution goes through a quarter in the next repechage.

Despite another loss, hats off to rookie porter Dameon Pierce. Thursday night against the Eagles, the Texans were deprived of their two best receivers. It was obvious that they were going to run profusely. Pierce, even targeted by the Eagles, gained 139 yards. A real one!