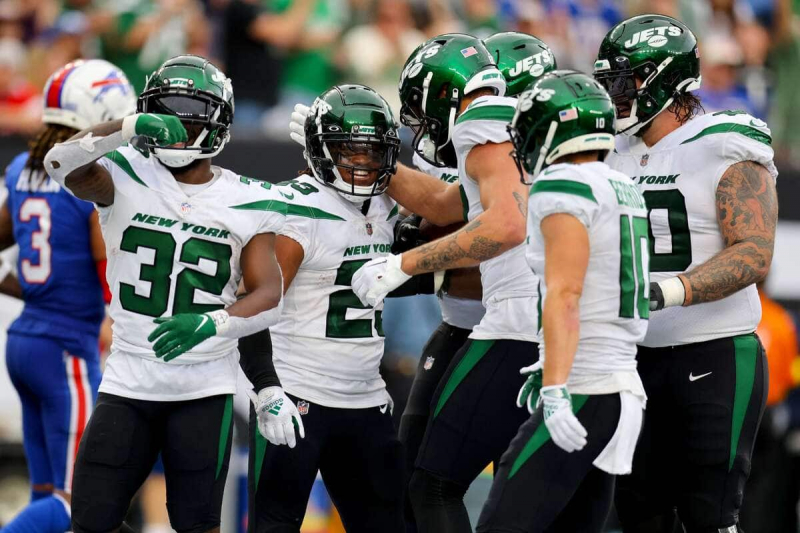 There were a few upsets during the ninth week of NFL action on Sunday, but none greater than that caused by the New York Jets, who defeated the mighty Buffalo Bills 20 in 17, at MetLife Stadium.

Obviously, the Bills are struggling against their division rivals, who suffered their only two losses of the campaign against them.

The crowd favorites have found the secret recipe for stopping what could be considered the league's best offense: limiting quarterback Josh Allen. The latter was the victim of two interceptions and threw no touchdown passes, in addition to being tackled behind his line of scrimmage five times. He eventually found a receiver's hands 18 times on 34 attempts, for 205 yards. He still had an important role, adding 86 yards on nine carries, scoring two majors that way.

For their part, the Jets relied on their rushing offense, which accumulated 174 yards. Michael Carter was arguably the most dominant running back, with 12 carries, going for 76 yards and amassing a major.

Center Zach Wilson only had to complete 18 of his 25 stints, including one in the opposing end zone, for 154 yards.

A second win for the Lions

In Detroit , the Lions also caused an upset by signing their second win of the season, beating the Green Bay Packers 15-9.

The home side made life difficult for pivot Aaron Rodgers, intercepting three of his stints. The 38-year-old athlete finally reached a receiver 23 times in 43 tries, for 291 yards and a major.

Rodgers will have only him to blame, since his defense was able to to contain the Lions offense, which only rushed for 254 total yards. Center Jared Goff was rather inefficient, completing 14 of 26 stints for 137 yards, in addition to being the victim of an interception. However, he managed two touchdown passes.

In Cincinnati, “fantasy football” fans who had running back Joe Mixon in their roster no doubt jumped for joy when they saw that their player scored five majors in the Bengals' 42-21 win over the Carolina Panthers.

Mixon carried the ball 22 times, for gains of 153 yards. He crossed the opposing goal line four times this way. He also caught four relays, for 58 additional yards and another touchdown.

The crowd favorites were never worried, they who led 35-0 at the half, then 42-7 after three quarters.

In Atlanta, Los Angeles Chargers kicker Cameron Dicker completed a 37-yard field goal, while the latter seconds of regulation time elapsed, to offer a 20 to 17 win for his team against the Falcons.

In Jacksonville, the Jaguars also caused some upset by defeating the Las Vegas Raiders 27-20. Running back Travis Etienne had another good game in the win, with 126 total yards and two majors.

In Washington, Minnesota Vikings kicker Greg Joseph converted a 28-yard field goal with just over 10 seconds left to give his side a 20-17 win , against the Commanders.

In Chicago, the Miami Dolphins and the Bears fought quite an offensive duel. The visitors were able to win 35-32. Quarterbacks Tua Tagovailoa and Justin Fields, in the win and loss respectively, each had three touchdown passes to no interceptions.

In Foxborough, the New England Patriots defense showed no mercy to the Indianapolis Colts offense and they won 26-3. expense of center Sam Ehlinger.