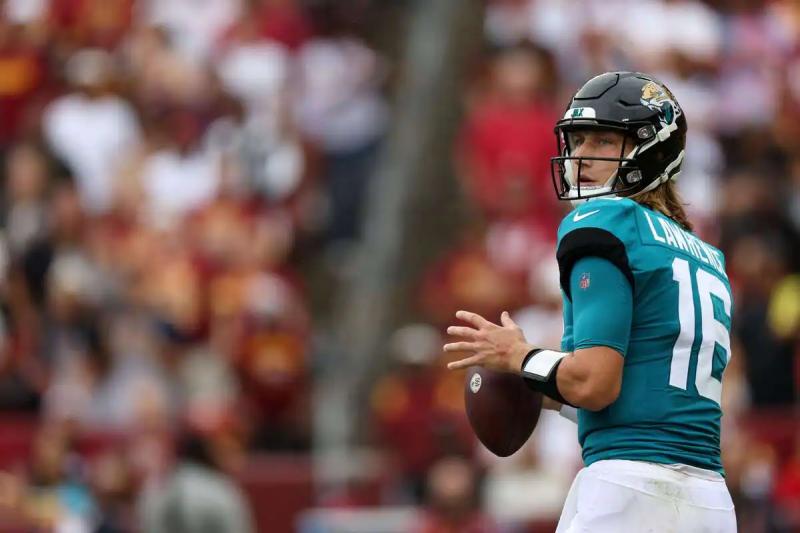 This is clearly no time to throw in the towel in the case of Trevor Lawrence, after just 18 games in a Jaguars uniform. It would still be time for the quarterback to start showing real encouraging signs. Otherwise, the honeymoon will soon be over.

When the Jaguars selected Lawrence first overall in the 2021 draft, there was virtually consensus. He was considered the best prospect at his position since Andrew Luck in 2012. Some even went so far as to mention Peyton Manning in 1998.

In his rookie season, Lawrence was the victim of 17 interceptions, the same number as during his brilliant three seasons at Clemson before making the jump to the NFL. He threw just 12 touchdown passes and was limited to 214 yards per game.

An outbreak remains entirely possible with such a talented, athletic and physically imposing player. The time has come, however, to see signs of this expected eloquence and a modicum of consistency.

Last season, Lawrence was spared any form of criticism for several reasons. It was his first year in the professional ranks. The Jaguars presented a roster worthy of a garage league. And above all, there was the whole Urban Meyer fiasco. All that is now behind him.

Since the head coach was taken out with the trash to be replaced by Doug Pederson, there is more hope.

Without being dominant, the Jaguars have improved their roster and Pederson , himself a former quarterback in the NFL, is used to working alongside young pivots.

Last week against the Commanders, Lawrence didn't play a bad game, but he was particularly bad in the pay zone (inside the opponent's 20-yard line). The Jaguars' 10 offensive plays in that critical area in the first half produced -1 yard.

It would be one thing if it was just one game, but since joining the NFL, Lawrence drooling especially in this phase of the game.

The best quarterbacks are often those who perform the most on third downs and in the fourth quarter.

Again, Lawrence struggles with 49.7% of his passes completed on third downs. In the fourth quarter, he has thrown just three of his 13 touchdown passes to date, against six interceptions.

Not to mention that his endlessly quiet leadership style has nothing to ignite The troops. It is therefore his game that must speak.

The pressure around Lawrence is more present than at Clemson. Against Washington last Sunday, analytics site Pro Football Focus noted that Lawrence responds well when his protective sleeve is intact, with 18 completions on 24 attempts for 200 yards and a touchdown.

Under pressure, he n completed just six of 18 passes for just 75 yards, including the fatal interception he threw late in the fourth quarter.

If it is normal for the statistics to be lower when he has less time to throw, the difference is still very significant. In the NFL, few days go by without 300-pound monsters blocking the field of vision.

Let's be clear, it's obviously far too early to insinuate that Trevor Lawrence is a failure or that he will become. The time has come, however, to show, with a minimum of consistency, that the enormous hopes placed in him are well founded.

MY PREDICTIONS OF WEEK 2

Both teams started the season in similar fashion. Both defensive units took control, the quarterback did the needful, and the ground game suffocated. Expect the Ravens at home to revive the Army with the return of JK Dobbins. If there's one secondary that can limit the damage against Tyreek Hill and Jaylen Waddle, it's the Ravens. Be careful though, the Dolphins spanked the Ravens last fall by repeatedly blitzing.

It's hard to believe that the Browns can win two games in a row with Jacoby Brissett in charge, but when Joe Flacco is the opponent, all dreams are allowed. The Jets played well in one aspect despite their loss and that was against the run, but it will be another story against the tandem of Nick Chubb and Kareem Hunt. The Jets' only chance is to overrun. They themselves bet on a duo full of potential with Michael Carter and Breece Hall.

For the first time in centuries, Leos are favored by bookmakers. Last week, the offense stunned with 181 rushing yards. Despite their victory, the Commanders gave the poor Jaguars 6.8 yards per carry. Lions carrier D'Andre Swift shone on Sunday, but he appears to be in bad shape. I will also come, soon, to favor the Lions in a takeable duel. For now, it's beyond me.

If the Jaguars played their entire season against the Colts, their lives wouldn't be so miserable. Incredible but true, the Colts have won just five of their last 13 games since 2015 against the permanent tenants of the NFL Catacombs. Five times the Jaguars have won by at least two touchdowns. Swear, promise, go check it out! That said, Colts forward Jonathan Taylor can't help but take control of the game. All good things come to an end.

Tom Brady against the Saints in the regular season, it's famine. For two years, his record against them is 0-4 and all four games have been lost by more than one possession. This time, however, Brady and the Bucs will have the upper hand without him even being the hero. The Saints defense gave up more than 200 rushing yards to the Falcons last week. Bucs forward Leonard Fournette is expected to drive the offense and the defense will strike again.

Saquon Barkley carried the Giants offense en route to a surprise win. For their part, the Panthers did not sufficiently involve his vis-à-vis Christian McCaffrey. Everything is there for a good old ground duel between two teams which nevertheless have aerial weapons, but who are struggling. Head coach Matt Rhule is still struggling to make his mark on the Panthers. The Giants restrained Derrick Henry, they will bottle McCaffrey.

Do not expect many points in this duel. The Patriots continue to look for themselves on offense and clearly lack the punch to hit big shots. The Steelers, despite winning and countless giveaways from the Bengals last Sunday, were limited to 4.4 yards per play. even if they are deprived of the mutant TJ Watt.

After being stunned in the opener, the Rams will not fall for the trap twice. The Falcons scared the Saints and can't be taken lightly. The Rams offensive line left a bitter taste as it got outplayed by the Bills, but the Falcons' defensive front isn't a powerhouse, far from it. Sean McVay will concoct a more diversified offensive plan. He rarely gets stripped two weeks in a row.

The Seahawks' defense looked better than it actually did due to the Broncos' offensive blunders, but they still gave up 433 yards and lost the services of safety Jamal Adams. Can Geno Smith provide two outstanding starts in a row? It is legitimate to doubt it. For the Niners, Trey Lance targeted Deebo Samuel eight times, but the latter only caught two assists. The chemistry must be worked. Playing home on a pitch that isn't swamp will help.

Ladies and gentlemen, make way for Cooper Rush! Are the Cowboys, deprived of their quarterback Dak Prescott, becoming poor lost sheep? Rush still won his only career start last year, against the Vikings. But the beautiful story to tell his grandchildren should have stopped there. Despite the loss last weekend, the Bengals played well on defense and will be waiting for Rush with a firm footing. Joe Burrow has just played the worst game of his life. It is now behind him.

ONE STEP AWAY FROM CRISIS

After their start full of blunders against the Seahawks, the Broncos have no room for error against the Texans. Imagine the reaction in Denver, after long months of hope since the hiring of Russell Wilson, if the team bogged down further. The Texans are inferior, but tough, and play without the slightest pressure. As Game 1 progressed, Wilson connected more with his wide wingers in the second half. The rust was chased away the hard way to get back on the straight and narrow.

The Cardinals' defense was ridiculed by the Chiefs' offense last week and the odds are good they will suffer a similar fate against the Raiders with their aerial arsenal. Davante Adams was fuming in his debut with the Raiders, in a losing cause. Maxx Crosby and Chandler Jones will torment Kyler Murray, who too often finds himself under pressure. Cards driver Kliff Kingsbury pointed to his men's lack of energy. Really early in the season?

Aaron Rodgers is jubilant. After a defeat, he reconnects with the Bears, whom he still enjoys torturing. Let's remember the facts: 22-5 record, six straight wins, 61 touchdowns, only 10 interceptions. The game takes place in Green Bay, where the quarterback has not lost to his enemies since November 26, 2015. When they suffer a loss under Matt LaFleur, the Packers are 9-0 in the next game, with an average margin of 14 points.

WATCH OUT FOR HENRY!

Last year, the Bills destroyed everything in their path when the Titans got in their way to surprise them with their train Derrick Henry (143 yards, three touchdowns). The Bills defensive line has a lot of pressure on its shoulders. There is much more depth on this line this season and the many staff rotations keep the forces fresh. This will make the difference, in addition to the fact that the duel takes place in Buffalo.

A second game on Monday night's schedule. The NFL is cruel to Kirk Cousins. The Vikings quarterback is allergic to lights, posting a 2-9 career record on Monday night. Not everything rests on him and the Vikings, in addition to their balanced attack, show an improved defense. The Eagles too, however, and their physical style with the ground game and receiver AJ Brown should allow them to impose themselves in their den in Philadelphia.