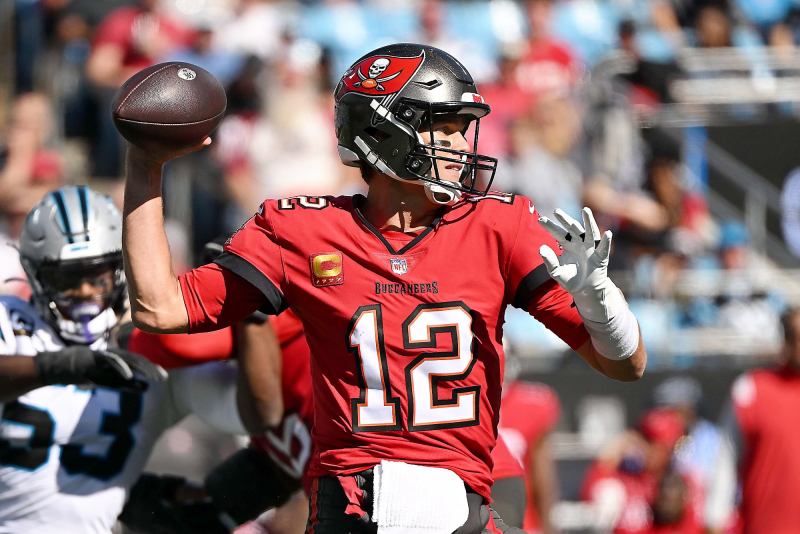 Just months ago, living legends Tom Brady and Aaron Rodgers seemed to live forever. Suddenly, every game is painful and both quarterbacks seem more deadly than ever.

Let's be clear from the outset, this bumpy first half of the season for the Buccaneers and Packers should not be entirely attributed to the difficulties of the two pivots.

However, when things go well, they receive a wave of unconditional love. It is only logical that their performance is called into question when the boat takes on water.

For the first time since 2002, according to NFL Research, Tom Brady has a losing record (3-4) after seven games. Yesterday, the Buccaneers scored just three points against the Panthers, a team that was considered among the league's worst and led by an interim head coach.

It's only the fifth time in Brady's illustrious career that his team is limited to three points or less.

Obviously, star receiver Mike Evans didn't help the Bucs' cause when he dropped a bombshell from Brady , he who was alone for miles around.

For the sixth time this season, the ground game failed to produce 100 yards. The offensive line is underperforming both in protection and on the ground game.

And the defense, which had only conceded crumbs on the ground for several years, gave up more than 150 yards per run for the third time this fall.

So this is not Brady's responsibility, but the fact remains no less than the 45-year-old fails to elevate his teammates like in the past.

Communication with recipients seems difficult. Angers against the offensive line have become frequent.

With all his accomplishments, Brady has obviously earned the right to be extremely demanding. However, this can become problematic when he himself does not play at his usual exceptional level.

Even more when he seems to benefit from rules of his own within the team. His absences, whether during training camp or for a wedding last week, certainly do not go unnoticed.

Brady has been sensational in 2021 and it's hard to believe that suddenly the wall of time has hit so hard. Everything suggests that he is not finished and that he will find a trick in his bag to revive the Buccaneers.

But an inevitable question arises: are his teammates as delighted as in the past to get high for him? Is the double standard in the locker room starting to leave its mark? We should not conclude that this is the case, but this plausible scenario is worth considering to explain the current difficulties.

It's not easier at the Packers with Aaron Rodgers. For the first time in his career, he also shows a losing record after seven games.

Faced with the Commanders, the attack did not convert a single third down. This is a first since the sixth week of the 1999 season, an eternity ago.

Rodgers didn't attempt a pass that traveled more than 10 yards until the very end of the first half. He still hasn't established a trusting relationship with his new receivers.

The usually surgical precision that Rodgers has been known for for years is lacking. For the second time in three weeks, the Packers let slip a 10+ point lead.

Whether it's him or Tom Brady, you should never bet too much money, if at all, to try to predict the end of the course. They have all the talent and determination in the world to bounce back.

The Bucs, despite four losses in their last five games, remain at the top of their cozy division. The Packers, in the mess of the National Conference, can still pick themselves up.

Perhaps one should begin to realize that the two untouchable legends have flaws in the frame. < /p>

The Bengals quarterback was ruthless for the Falcons as he completed 34 of 42 passes for 481 yards and three touchdowns. He added a touchdown. After a limping start to the season, the Bengals have restarted the machine.

The Quebec cornerback does more than hold his own . Against the Packers, he made some big plays and right now he's establishing himself as the best cornerback on the team.

Their rookies are sensational, the offense is going much better than expected, and the win over the Chargers gives the Seahawks first place in the National Conference West Division. Impressive!

No one is holding back the Raiders carrier lately. Josh Jacobs pounded the Texans' body with 143 rushing yards and three touchdowns. He's rushed for 441 yards in his last three games.

Patrick Mahomes gained 423 yards through the air with three touchdowns. The ground game gained 112 yards (5.3 per carry). Mecole Hardman scored three touchdowns. All against the formidable defense of the 49ers. The Chiefs can still hit anywhere.

The loss to the Commanders takes the Packers (3-4) away from the Vikings (5-1) in the North Division. The air attack continues to seek its bearings. Only twice this season has Aaron Rodgers passed the 250-yard mark.

Matt Ryan threw two more interceptions and the Colts now lost two important division games to the Titans. When Ryan throws 44 passes and Jonathan Taylor runs 10 times, there are questions to be asked.

Where did the explosive Lions attack go? After averaging 35 points in their first four games, they had none last week and only six this week. The loss of receiver Amon-Ra St. Brown hurts, but still…

They lost the game to the Seahawks , but, most importantly, they lost receiver Mike Williams and cornerback JC Jackson. The Chargers and injuries, a sad story that never ends…

Okay, the Broncos were moving from Russell Wilson (injured) to Brett Rypien. Still, they scored just nine points against the Jets. The Broncos are scoring 14.3 points per game this season. What a terrible sight!

The Seahawks are off to a stellar start to the season and one of the architects of their most recent win over the Chargers is rookie running back Kenneth Walker III. In the fourth quarter, the Chargers could still hope to get back in the game despite being down 14 points, but the Seahawks handed the ball to Walker, who galloped for 74 yards. The touchdown shattered the last enemy hopes. Walker finished the game with 168 rushing yards and two touchdowns.

2. THE RETURN OF PRESCOTT

When he returned to action against the Lions, Cowboys quarterback Dak Prescott wasn't sensational, but he got the job done. He completed 19 of 25 passes for 207 yards and a touchdown pass, with no interceptions. His thumb injury didn't seem to limit him, although the rust seemed to be there. He completed his only touchdown pass after a gift from the Lions to the Cowboys, when quarterback Jared Goff dropped the ball on a sack from quarterback Sam Williams.

The Browns fought hard against the Ravens, but saw their momentum stalled late in the game. Advancing into the Ravens' area with the ball, they found themselves at the 37 line to attempt a field goal that would have leveled the score, but an offside penalty cost them five yards. The field goal attempt by kicker Cade York had to go 60 yards and his kick was deflected by Malik Harrison. The Ravens thus retained their grip on the first place in the North Division.

Once again, Jets rookie running back Breece Hall wowed against the Broncos. He spun for a long run of 68 yards, into the end zone. In his case, unfortunately, it is rather his knee injury that takes precedence over his performance. Head coach Robert Saleh said it would be an anterior cruciate ligament injury. The extent of the injury remains to be seen, but it looks very bad for the one who shone with the Jets.

5. ONE YARD FROM GOAL

On a day that was not memorable in terms of suspense and stakes, the Giants and Jaguars put on the best show. Ahead by 23 to 17 at the end of the game, the Giants were very hot. With 1:04 to play, Trevor Lawrence and the Jags began the last-ditch push. On the Giants' 17-line and with five seconds left, Lawrence joined Christian Kirk, but the latter was tackled one yard from base by Fabian Moreau, then Xavier McKinney and Julian Love completed the tackle to close the debate.