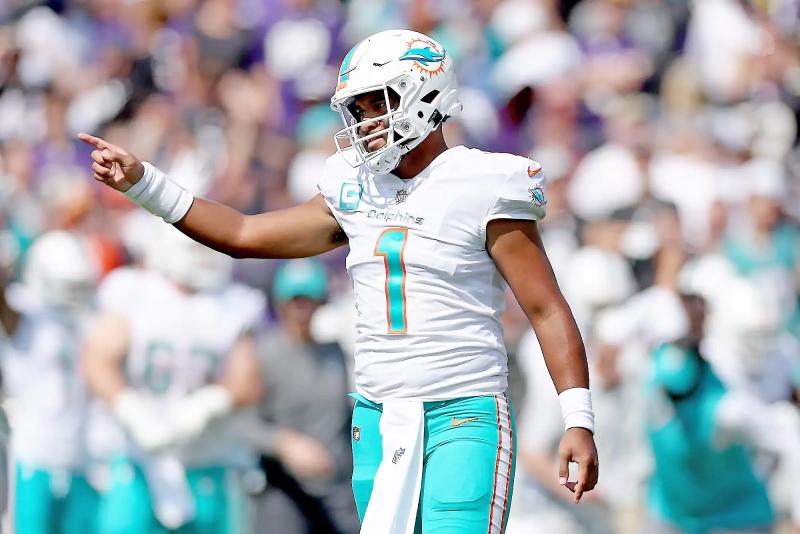 The target of many critics since his arrival in the NFL, quarterback Tua Tagovailoa had the game of his life against the Ravens. A win doesn't make a career and it probably won't be enough to silence his critics, but his performance at least gave Dolphins enthusiasts what they haven't had for years: hope.

Tagovailoa finished the game with 469 yards, six touchdowns and two interceptions. He threw four of his six touchdown passes in the final 13 minutes, including the one that shut down the Ravens with 14 seconds left.

With six touchdown passes in one game, he tied the franchise mark set by Dan Marino in 1986 and Bob Griese in 1977. Not bad for a quarterback that many Dolphins fans were trashing after three quarters .

No need to get carried away too quickly and canonize Tua after this mind-blowing performance. The next two games will be played against the Bills and the Bengals, and he could quickly come down to earth. On the other hand, against the Ravens, the young quarterback at least showed that with him, the team can always hang on, even after a very ordinary first half.

In the fourth quarter, he would have been easy to collapse. Tagovailoa instead responded by completing 13 of 17 passes for 199 yards and four touchdowns in the most critical 15 minutes.

In 24 previous starts in his young career, Tagovailoa had only had one game with more than two touchdown passes. He has often seemed hesitant, and his decision-making has repeatedly been questionable.

Many have criticized his lack of arm power and even yesterday his two long touchdown passes to Tyreek Hill in the fourth quarter seemed to run out of juice. He obviously didn't become a suddenly perfect center in an afternoon, but it's definitely the kind of game that can instill a healthy dose of confidence in him.

What works in his favor is the presence of a hyper explosive duo by his side. Hill (11 receptions, 190 yards, two touchdowns) and Jaylen Waddle (11 receptions, 171 yards and two touchdowns including the game-winner) finally offer the Dolphins real weapons that are impossible to circumvent for opposing defensive coordinators.

< p>Hill's touchdowns have come from 48 and 60 yards. According to ESPN Stats & Info, the small receiver now has 32 touchdowns of 30 yards or more since 2016. Across the league, it's twice as many during this period as any other player.

Hill and Waddle are also the first teammates in the Super Bowl era to each gain 170 yards or more and two touchdowns in a game, according to NFL Research. It's no exaggeration to say that the Dolphins haven't bet on such a dangerous tandem since the heyday of Mark Clayton and Mark Duper in the 1980s.

Do not believe that the Dolphins are necessarily gone for glory and that nothing can stop them. At the risk of repeating itself, a big offensive game, no matter how glorious, guarantees absolutely nothing.

What is obvious, however, is that the Dolphins now have the ammunition to fight in the powerful American conference without losing face. They can open the valves and be aggressive.

To hope to stand up to the big clubs like the Chiefs, Chargers and Bills, it is not a luxury, but a necessity.

After a column in these pages where it was mentioned that the Jaguars quarterback needed to show signs of life, Lawrence responded with his best game yet . He completed 25 of 30 passes, including two for touchdowns. Does the real Lawrence show up?

Picked second overall in the last draft, the defensive end from the University of Michigan shone in his first home game for the Lions, with three quarterback sacks. It's hard to ask for more than a team record for a rookie.

Many of the Buccaneers defensive players deserve credit for victory. In this regard, the Bucs are formidable. Jamel Dean takes the crown with two interceptions in the fourth quarter, which directly led to 10 points from the Bucs' offense.

Quite a victory against the Bengals! In the absence of Dak Prescott, Cooper Rush played well. The connection to 2017 seventh-round pick Noah Brown was great, and on defense Micah Parsons (two sacks) is a beast.

< p>After a limping start, the Cardinals quarterback took matters into his own hands in the fourth quarter, with simply ridiculous plays. His disheveled run on a two-point convert is legendary.

What disastrous news for the young 49ers quarterback, who is already seeing his first season come to an end! He will be operated on for a broken ankle today. The 49ers had taken the gamble of keeping Jimmy Garoppolo as an insurance policy. Well done!

Okay, the Colts were without their two best receivers, but how do you justify another loss to the Jaguars, this time by 24 0? There is no acceptable excuse for this team playing like one of the worst in the NFL.

The The Bucs toiled hard to win and Tom Brady often made his displeasure known, smashing a poor tablet, throwing his helmet and scolding teammates. As it is Brady, the reflex is to say: what a competitor! If it was any other quarterback, you'd say: what a bad attitude!

The Browns squandered a 13-point lead with 1 min 55 s remaining against the Jets. No team in the NFL had sabotaged such a lead in the last two minutes since… the Browns, November 4, 2001. It's not invented!

Another team that squandered a comfortable lead, this time by 16 points in the fourth quarter. The kind of disappointment that will haunt them at the end of the season.

5 Games of the Week

The Jets seldom give their fans happy moments. Facing the Browns, it was their Super Bowl! When the Browns scored a touchdown with 1 55 s left to take a 30-17 lead, they looked like they were heading for victory. Then, a quick touchdown on a 66-yard play from Joe Flacco to Corey Davis, a successful short kick followed by rookie receiver Garrett Wilson's second touchdown of the game and an unlikely comeback was completed. Fourteen points in 1 min 22 s!

The rivalry between the Saints and Buccaneers never lacks in intensity. Especially between receiver Mike Evans and cornerback Marshon Lattimore, who once again came to blows after the whistle. Lattimore got into the shoes of a few Bucs players, but Evans came off the bench to assault him. Both were eventually kicked out and the NFL has let it be known that it may suspend them. After the skirmish, the Bucs looked whipped and dominated the remainder of the duel.

In a hard-fought duel like the one between the Patriots and the Steelers, a bad game can make all the difference. In the third quarter, the Steelers defense forced the Patriots to punt. However, the one responsible for returning the clearance, Gunner Olszewski, fumbled the ball, which was covered by Brenden Schooler deep in the Steelers area. A fatal blunder for Olszewski, who has spent the last few seasons with the Patriots. Bill Belichick's troops took advantage of this blunder to score a touchdown moments later that earned them the victory.

The Rams almost covered themselves in shame against the Falcons. Leading 31 to 10 in the fourth quarter, the defending champions opened the door to their rivals with a few blunders (a blocked clearance and a fumble). The Falcons came within six points, with the ball at the Rams' 24 line. A pass from Marcus Mariota to Bryan Edwards landed in the hands of cornerback Jalen Ramsey, who ended the debate and redeemed a tough opener 10 days ago.

In overtime against the Raiders, the Cardinals started with the ball, but were forced to punt. The Raiders, in turn, advanced into the enemy zone. Always-reliable receiver Hunter Renfrow was struggling to get a first down when linebacker Isaiah Simmons knocked the ball off him. Cornerback Byron Murphy quickly grabbed the precious object to bring it back into the end zone from 59 yards, securing the victory for the Cards. However, they seemed to be headed for disaster after an atrocious first half.