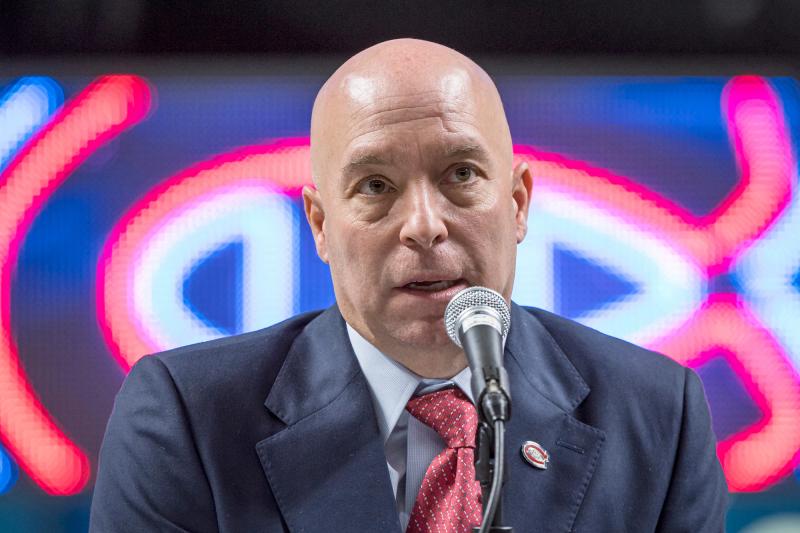 Shane Wright, Juraj Slafkovsky or Logan Cooley. If there was a consensus choice a few months ago, there are now three contenders to become the top of the class in the 2022 draft.

For the first time since 1980 with Doug Wickenheiser, the Canadian will speak in the very first row. And to add a bit of magic, the Bell Center will be the scene of this draft.

Kent Hughes and the CH leaders hid their game well as the decisive day approached. The general manager has repeated more than once that he has not yet made his choice.

“But it is always a good thing to have the first choice since we decide to our own fate,” the rookie GM said more than once. and last place, the Habs will dictate a large portion of their future with a single selection.

“When you speak in the front row, you have no right to be wrong, recalled a recruiter from the West. It may seem very easy since you draw first from the large pool of players, but there are years when it gets complicated. In 2022, there is not a hockey genius, a gifted person who is beyond doubt.

“My feeling is that I don't know who will come out on top,” added a Western scout. There is Wright, the one we saw for a long time as the lucky one. There's the great Slovakia winger [Slafkovsky] and the creative and dynamic center in Cooley. The CH is looking at the three options.”

Another Western recruiter surveyed by Le Journal hesitates several seconds when asked a very simple question, namely who the Canadian will turn to with the first choice.

“Yes, there is clearly a debate for the first choice, he replied after a pause of about five seconds. Wright will become a good center in the NHL. I describe him as a good player, there is no doubt. But he's not a franchise guy. Shane is smart, he is responsible both ways of the ice, he has a good shot and good offensive skills. But it doesn't keep you on the edge of your seat. I would think of others. Slafkovsky has a rare element to his game, that of a natural scorer. And on top of that, he's very imposing at 6'4″. Cooley, on the other hand, is probably the one with the highest potential.”

It's not just the unpredictability based on three candidates, there's also the fact that the Canadiens will come to this draft with new hockey faces. We will live the post Trevor Timmins era with Bobrov and Lapointe.

Before arriving in Montreal, Gorton and Bobrov worked with the New York Rangers. In 2019, they drafted winger Kaapo Kakko with the second overall pick after Jack Hughes with the Devils.

“I don't know if it can become a factor, but Kakko is a big winger in the mold of Slafkovsky, pointed out a recruiter from the East. Gorton could still be put off by this fairly recent choice.”

Choices by the ton

The CH will have very good ammunition for this draft which will take place on Thursday (1st round) and Friday (2nd round until 7th round) with 14 choices.

Hughes and Gorton could easily consider trading a few picks in order to move up a few ranks.

“I imagine a scenario where Hughes trades the 26th pick and other picks to get closer to 15th in the first round, predicted a Western scout. The Canadian has drafted several players in the past, but there is a limit of 50 contracts. They will have no choice but to prioritize quality over quantity.”

SHANE WRIGHT < /p> Shane Wright in the colors of the Kingston Frontenacs.

Two years ago, a year ago and even six months ago, Shane Wright held the label of the first in class for the 2022 draft. But as D-Day approaches, Wright's star no longer sparkles as brightly.

Wright's name still remains at the top for several NHL teams, but other rosters have also slipped him past Juraj Slafkovsky and Logan Cooley.

“When you watch a guy for three years, you find fault with him at the end, recalled a recruiter from the East. His story reminds me of that of Sean Couturier. By his draft year in 2011, Sean had dropped to 8th place. But the Flyers have never regretted this choice. I feel a similar shortness of breath with Shane. There have been expectations for a long time. However, he remains a very good hockey player.”

Wright had followed in the footsteps of John Tavares, Aaron Ekblad and Connor McDavid by making the jump to the OHL at the age of 15. In his rookie season with the Kingston Frontenacs, he scored 39 goals and had 66 points in 59 games. Captain of the Frontenacs this season, he hit the target 32 ​​times and collected 94 points in 63 games.

Although recognized as a smart and responsible center, Wright is not unanimously recognized for his hard work.

“I left Kingston disappointed more than once,” claimed a recruiter West.

“Wright has what it takes to become a number one. He didn't have a great season, but we mustn't forget his season at 15 in the OHL and his very good Under-18 World Cup in the summer of 2021.”&nbsp ;

“A smart young man, a responsible center. He probably doesn't have the potential to be a big star. He's not the next Patrice Bergeron, but he looks like a center in the mold of Nico Hischier. He will play in the first two lines, he has good skills and talent.”

– A scout from the East

Juraj Slafkovsky in action in a duel against Germany at the World Cup in Finland last May.

Juraj Slafkovsky was never afraid to say it openly. He would dream of mixing the cards in this draft by climbing the stage first in Montreal.

“I recently read that the Canadiens were looking for a left winger to play with Nick Suzuki and Cole Caufield . I'm sitting here and waiting if the Habs are looking for me!”

The 6-foot-4, nearly 230-pound Slovak winger offered that answer to colleagues at TSN.

Slafkovsky has two crucial cards in his game, that of natural scorer and potential winger .

“Juraj is a big guy, he can dominate with his physicality, he finds space in the offensive zone, he protects the puck and he has a natural instinct as a scorer. You don't teach a player how to score goals. It must be natural and it is the case with him. One day he will score 40 NHL goals.”

On the international stage, Slafkovsky made Slovakia proud with seven goals in seven games at the Beijing Olympics to help this small country come back with a bronze medal. The 18-year-old left winger, however, presented more modest numbers with TPS Turku in the Finnish Elite League.

“There are doubts about his consistency, but he didn't have a great playing time with the TPS,” mentioned an Eastern scout.

“He scores goals and that's a rarity in the NHL. He has this scoring instinct, he gets there in different ways. Juraj has a big frame and he finds space when there is none. But he will need a good cross to use his shot.”

“He had remarkable international tournaments with the Olympics and the World Cup. He dominated against men. But I didn't like his consistency, we never saw the same winger again in Finland.”

– A recruiter from the West

Denis Savard in the nose

Dynamic player with he strong character, Logan Cooley is an attractive candidate for the 2022 draft.

There is the specter of 1980. That year, the Canadian spoke first in the draft. The CH had chosen Doug Wickenheiser, a center for the Regina Pats, before defender Dave Babych, but especially before center Denis Savard, who played with the Montreal Junior.

“When I look at this year's draft, I'm afraid that the Canadian will relive the 1980 scenario. >

Cooley, a center from Pittsburgh, is described as a much more dynamic and creative forward than Wright. But he doesn't have an imposing physique at 5'10″ and 180 lbs.

“He has more flashes in his game than Wright, he is also a tougher center, pointed out a scout from ballast. If he was 6'2″, there would probably be no debate for his selection rank. He reminds me of Jack Hughes, but a tick down.”

If he doesn't play in the NHL at age 18 in the fall, Cooley will report to the University of Minnesota Gophers in the NCAA.

“For me, Cooley is the brightest hope in this draft. He has more character and he is very dynamic. He finds ways to make games with his intelligence.”

– A recruiter from the West

“Logan has great offensive potential. He often turns into a magician on the ice, he has this spectacular side. He skates well, he works and he's competitive even though he's not the biggest.”