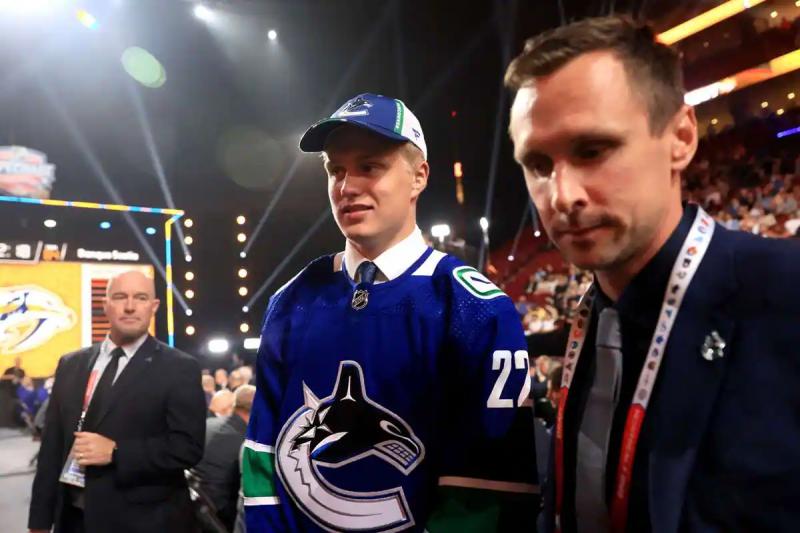 The Vancouver Canucks made many reporters and spectators smile during the National Hockey League (NHL) Entry Draft on Friday by selecting a defenseman named Elias Pettersson.

Hockey game writers and others called upon to cover professional hockey activities will surely have to be vigilant in the coming years, with the Canucks' new find having the exact same name as the star forward playing with the big club since 2018- 2019.

Regarding full-back Elias Pettersson, named in the third round of the session, i.e. 80th overall, he was born in the Swedish town of Vasteras on February 16, 2004 and mainly evolved during the last campaign with Orebro HK, in his native country. Among other things, he collected 18 points in 37 games with the under-20 team.

The defender also mentioned to the media shortly after his selection that he had never met his namesake having been drafted at the fifth level in 2017 and having played 245 career season games.

The case of the two Pettersson does not is not unique in the world of hockey. During the 2022 auction, the son of Montreal Canadiens general manager Kent Hughes was called up by the Los Angeles Kings; named Jack, so he has the same name as the top New Jersey Devils forward.

Elsewhere in the NHL, the name Sebastian Aho refers to the Carolina Hurricanes forward as well as a guard who played for the New York Islanders last year.

In Quebec, the identities of Stéphane Richer, Alain Côté and Alexandre Picard, in particular, have already referred to hockey players different. In the case of Richer, a defender with that name played for the Sherbrooke Canadiens, in the American League, from 1987 to 1990, while the famous number 44 with the same name enjoyed two seasons of 50 or more goals in Montreal.< /p>