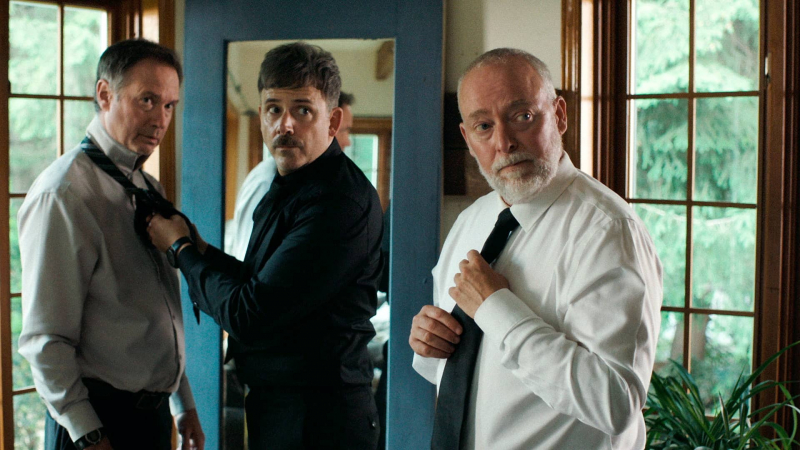 With Niagara, his second feature film, Guillaume Lambert bet on offering François Pérusse a first real role in the cinema. The comedian proved him right by composing a frankly touching tragicomic character.

Difficult, indeed, not to be moved by the sad fate of Alain (Pérusse), taekwondo teacher in his fifties who has just lost his job after being the target of false allegations of sexual assault made by the girl of his spouse.

Desperate, Alain toyed with the idea of ​​jumping off the top of the Montmorency Falls bridge when he received a phone call from his brother Victor-Hugo (Guy Jodoin), who told him that their father (Marcel Sabourin) had just died.

Along with his other brother, Léo-Louis (Éric Bernier), an arrogant risk manager who works in a Montreal office tower, Alain immediately sets off for Niagara to attend their father's funeral.

< p>It was not until they arrived there that Alain and Léo-Louis learned from Victor-Hugo that their father had died in totally absurd circumstances, while he was trying to raise the “  Ice Bucket Challenge”.

Those who are familiar with the work of Guillaume Lambert (The fortuitous scenes, Adulthood, Audrey is back) will recognize the quirky and tongue-in-cheek humor advocated by the screenwriter and director. Divided into chapters, Niagara alternates between comical comedy scenes and emotional moments illustrating the malaise of these three brothers in the middle of a midlife crisis, in a rather sympathetic kitsch and nostalgic atmosphere.

If it is sprinkled with uneven gags and puns that sometimes seem forced, the film seduces by its desire to deploy an unusual and unbridled humor that differs from what we are used to seeing in Quebec cinema. The first part of the feature works quite well, but the script eventually runs out of steam to end with a fishtail finale.

Guillaume Lambert – who also plays a small role in the film – has had flair in entrusting the main role to François Pérusse. This one moves by the naturalness of his playing and the sadness in his eyes. Guy Jodoin and Éric Bernier also bring their stone to the building, each infusing their own humor and energy into the film. We will also remember the contribution of Véronic DiCaire and Katherine Levac, endearing in the respective roles of an Ontario waitress from Oshawa and her dental hygienist daughter.

A film by Guillaume Lambert