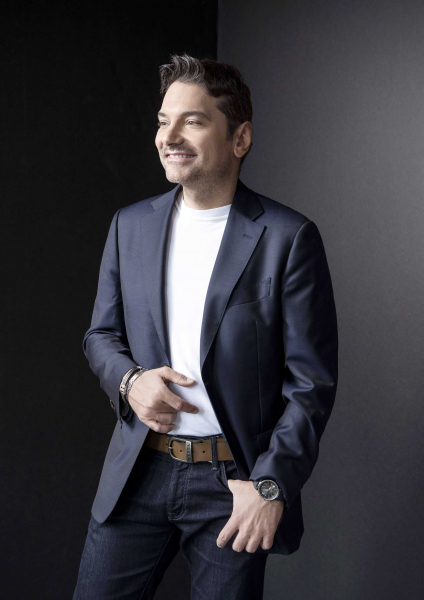 After 23 years of career, Nicola Ciccone had not yet recorded a Christmas album. With L'esprit de Noël, he offers four original songs and covers that he has chosen to put to his hand with folk colors and traditional.

We find the classics Sainte-Nuit, He was born the divine child, Christian midnight em>, Blue Christmas, White Christmas, Happy Xmas (War is Over) by John Lennon, and also two songs in Italian related to his childhood.

“I was to be the last performer who had not yet made a Christmas album,” he said, laughing, during an interview.

The author, composer and interpreter wanted to do one someday. There were a lot of requests along these lines.

“I love Christmas. I have a big family and it reminds me of my childhood. I had that in mind for a long time,” he said.

The first Christmas shows he presented, four years ago, and the simple Merry Christmas, which got 311,000 plays on Spotify, put this album project on track.

Nicola Ciccone wanted an opus in his image. He wanted it to be festive and unifying.

“I didn't want to re-read songs that everyone picked up in a hurry. I took my time. After two Christmases where we were confined and which were a little stolen from us, it was time to do it. I had, to my surprise, a lot of fun making this album. I'm very happy,” he said.

Nicola Ciconne began writing original Christmas songs last December. He composed I wish it were Christmas all year long and The Spirit of Christmas. He even wrote, at the suggestion of his musical director, Peter Ranallo, a Christmas love song with All I Want For Christmas Is Love.

It was important for the author, composer and performer to come up with original content.

“I wanted to have more traditional and folk arrangements. I wrote this without pretension. In the studio, the musicians had a blast and that gave me confidence,” he said.

The classics then followed with John Lennon's Happy Xmas, White Christmas by Bing Crosby, a very bluesy version of Blue Christmas by Elvis and Italian Christmas songs from his childhood.

He even allowed himself certain inflections in the melodies of certain classics.

“I sing them more in a folk way compared to the versions we are used to hearing. These songs were written 300 years ago. I wanted to put them in my hands while having fun and making them more accessible. There is a lot of sweetness on this album”, he said.

The author, composer and interpreter of 44 years old clarifies that his childhood Christmases were not synonymous with presents.

“I lived in a very poor neighborhood. When my friends came to our house, I found it difficult. It was a poor neighborhood and it showed. I was looking forward to the first snows because it evened it all out. All the poverty-related things lying around like old car wheels disappeared under the snow. We felt like we were less poor. I was looking forward to Christmas for this reason. It made me feel good,” he said.

Nicola Ciccone would like the Christmas spirit to be present throughout the year.

Happy Xmas (War is Over ), by John Lennon, is his favorite holiday song.

“Christmas songs are often lighthearted. This one is deep and speaks of peace in the world. It seems to resonate even more in the current context. We need, after two elections and a pandemic, a unifying message. It's time to come together, celebrate together and have a common goal,” he concluded.

Nicola Ciccone will present his show Christmas Spirit December 2 in Gatineau, December 3 in Saint-Albert, Ontario and December 16 in Brossard. Other dates will be added and will appear on the website nicolaciccone.com.