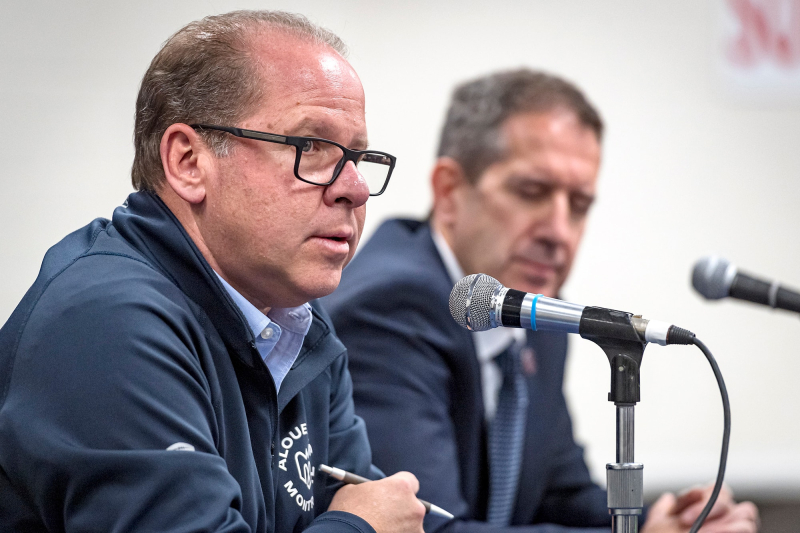 Danny Maciocia says he is 99.9% convinced that he will not continue to combine the dual roles of general manager and head coach of the Alouettes next year. He adds with humor that he does not want to commit 100% because the journalists would not fail to put it on his nose if he returned to lead on the sidelines.

Its president Mario Cecchini supports its position. In his opinion, two men are not too many to occupy the two positions.

It remains to find a better man than Maciocia to lead the team, Cecchini said towards the end of the press briefing of one hour in which the duo loaned themselves in the catacombs of the Olympic Stadium, yesterday.

We have the right to think that there is probably one out there somewhere, but he will have to prove that he can do better than Maciocia.

The successful candidate will need to have experience in the Canadian Football League, either as a head coach or an assistant, insists Maciocia.

There is therefore no risk of seeing Americans like Dan Hawkin or Mike Sherman again, whose short stays at the helm of the Alouettes turned out to be fiascos.

This is a good thing.

In addition, the next head coach will have to deal with the core of the assistant staff in place, which includes seven members out of a total of eight who have acquired the bulk of their experience in Quebec.

We can only applaud this line of thinking. Quebec coaches no longer have anything to envy their colleagues from other Canadian provinces. They are competent.

In the absence of having Quebec owners, Cecchini and Maciocia have trusted people from here as much as possible since their arrival with the team in 2020.

And there is no going back.

It will continue with the next head coach. “For me, it will be a priority and I have discussed it with Mario,” Maciocia said.

“The important thing is to put the cards on the table to find out if this person is ready to accept such a situation. For me, some things are non-negotiable.

Four names on the table

So that considerably reduces the list of potential candidates.

Maciocia says he has four names on the table. his list, without however specifying the number of those who would come from the organization or from outside.

Two or three of them worked under his orders when he came down from his office as DG to replace Khari Jones in the final season.

For some, Noel Thorpe is a favorite. He doesn't speak French, as far as we know, but Maciocia says he doesn't make the language issue a priority.

Maciocia and Thorpe have known each other for a long time. They worked together with the Edmonton Eskimos and the University of Montreal Carabins before ending up with the Alouettes.

Thorpe is dynamic in his role as defensive coordinator, but he may need to to be in control of your emotions a little better in a position of command.

Anthony Calvillo can now speak French. He defended himself well during his visit to the Antechamber on Monday evening. The interview was to be done in French and English, but Calvillo spoke more in the language of Molière.

With the ice broken in front of an audience, he should continue to improve. He does not hide that he would like to audition for the job.

Would he be in his place?

The other aspirant working for the Alouettes is André Bolduc, who in addition to taking care of the running backs, has served as assistant to the head coach for the past two years.

As regards the suitors not being part of the organization, an old trucker whispers in my ear the name of Jason Maas.

The latter was the second quarterback of the Edmonton Eskimos, behind Ricky Ray, when this team won the Gray Cup under the management of Maciocia in 2005. The two former accomplices would have hooked atoms.

We should know Maciocia's choice before Christmas.

Who are the owners of the Larks? asked colleague Jean St-Onge loudly to Mario Cecchini yesterday.

The team president replied that the shareholding had not changed since the death of Sid Spiegel. His estate owns 75% of the interest, while his son-in-law Gary Stern owns 25%.

But it is still impossible to know the identity of these people.

Members of his family attended the Alouettes' Eastern semi-final and final games against the Hamilton Tiger-Cats and the Toronto Argonauts.

But they went incognito. They want to remain discreet.

It would be nice if they came out of the shadows one day.

For the moment, everything is going normally in the Alouettes' offices. Capital flows in, employees are paid and bills are met.

But no one knows the Spiegel family's plans.

Does it want to stay in the picture or divest of its interests in the Alouettes now that its patriarch is no more?

Both questions remain unanswered for the moment.

Is it true that Pierre Gervais wrote a book?.. Big mission for the Canadiens between now and the end of the holiday season. He will play 14 of his 19 games on opposing rinks during this period. It will be a good test for the young players on the team… It was no surprise that I learned of the resignation of Éric Bélanger as head coach of the Trois-Rivières Lions. It seems that things have been brewing behind the scenes since the start of the season… What more can we say about Patrice Bergeron who has just crossed the 1000 point mark in the National League? I do not know his plans for his retirement, but it seems to me that he would make a very good manager in the world of hockey. Here's a guy with a solid head on his shoulders.