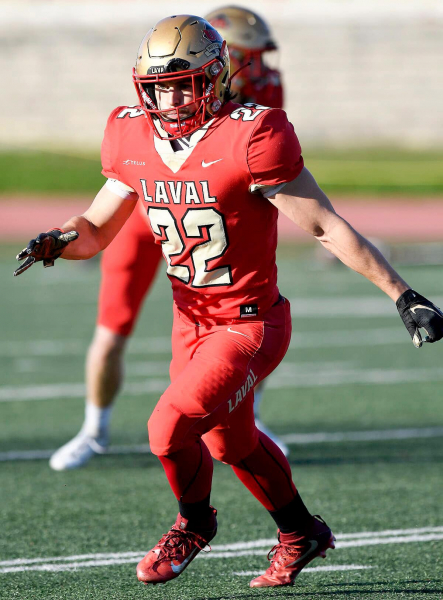 “Beating a team is one thing, beating a team a second time is totally another matter. “. This is how Maxym Lavallée described the mentality of the Quebec players for the next game.

The game may be without stakes, the defensive half Maxym Lavallée does not intend to change anything in its approach at the dawn of the playoffs. No question of looking down on the Concordia Stingers, even if the first game between the two teams ended in a one-sided victory of 60 to 14, at TELUS-UL Stadium.

The veteran ensures that the Rouge et Or do not show up at Concordia “thinking it will be easy”.

“The reality is that it's really not the same team we played the first time. […] It will be a totally different game. We do not have an overconfidence to think that we are going to go there and burst them. »

To support his statements, Maxym Lavallée underlines the return to play of the prolific receiver Jacob Salvail in the alignment of the Stingers. This addition allows the Stingers to count on three talented wide receivers in Jaylan Greaves and Jeremy Murphy. Salvail even received the title of offensive player par excellence this week in the RSEQ.

Twinned with the arm of quarterback Olivier Roy, Lavallée knows that the trio can do damage at any time.

< p> “It is sure that their DNA [des Stingers] is more towards the pass and they have excellent receivers with [Greaves, Murphy and Jacob Salvail]. He has just come back and I have great respect for this player. I play with since CEGEP at CNDF. »

“They are very good receivers who are very thorough in the way they do things. In the coverage, we will have to be very, very strong at the end of the week, ”says Lavallée, adding in passing that we” will also have to be wary ”of running back Dwanté Morgan.

< strong>“Very happy” with his season

From an individual point of view, Maxym Lavallée says he is “very happy” with his season. In seven games, he totaled 26.5 tackles, including 22 made solo.

When he looks back to assess his work over the last few months, there are a lot of positives even if he thinks back to “a few big games just missed”.

“I use that to motivate. I am confident with my teammates and myself. “

His decision to postpone his draft year for a season is beneficial, he says.

” For me, it was important to continue to progress, I absolutely wanted to be with that team. I'm really at peace with my decision. »

It's been almost 20 years since the Rouge et Or last lost at Concordia. In the Stingers camp, it is now time to change the tape, believes quarterback Olivier Roy.

The tape Olivier Roy refers to is the video sessions following a game, where we reviews the good and bad moves of the previous match. For the third-year pivot, it's obvious now that it's time to change
the cassette.

“For those who have been there for a few years, it's not a hiding place, we have a lot of trouble playing against the Rouge et Or. We'll have to find a way to learn from our defeat that we had at the start season and build on it”, summarizes the recipient of the title of most valuable player in the RSEQ last year.

“In the locker room, there are guys who are tired of always seeing the same tape. »

No need to look far to find a source of motivation. The 37-30 overtime victory over the McGill Redbirds last week is already a good catalyst.

“Hopefully we can build on that. Especially for our younger players who haven't necessarily had a lot of college-level wins. [We have to] build our confidence as we approach the playoffs.

And Roy hasn't forgotten the 60-14 beating at TELUS-UL Stadium earlier this fall either. Another source of inspiration.

“Hope that whips it up guys. I think we are all competitive players and nobody likes to lose. We have shown character on several occasions in recent years. I hope the guys remember the feeling we had when we left the field [last Saturday]. »

Olivier Roy will also have one more weapon at his fingertips on Saturday afternoon, at the stadium Concordia University. Prolific wide receiver Jacob Salvail is back and he wasted no time in letting it be known.

The veteran had quite the game at McGill last Saturday in addition to scoring the game-winning touchdown in overtime.

“We have receivers that are vertical threats in Jaylan and Jeremy, but Jacob brings another aspect. An intelligent receiver who knows where to position himself, who knows where to find the zones. When all of our offensive poisons are there, it puts us in a better position to be successful offensively. »