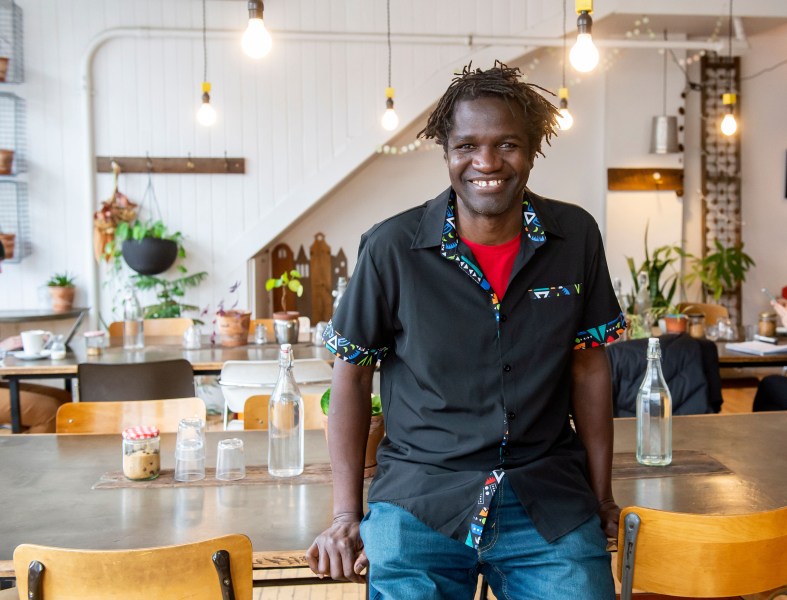 It is by combining science and humor that former biology teacher Boucar Diouf became a comedian, then a complete artist. “When you make people laugh, they give you everything,” he says. They open their bubble to you and open their heart to you.” At 57, he is offering his fifth solo show: NOMO Sapiens.

“I'm on my X, launches Boucar Diouf straight away. I do what I want to do: comedy shows, I write books, I popularize on the radio, conferences… I feel privileged and blessed by the gods.”

This fifth solo show, the comedian has been working on for three years. Its goal ? Trying to put the human in creation, pointing out what is special.

“I say: I am going to put you back in the exact place, between the chimpanzee (living in a phallocratic system) and the bonobo (evolving in a system where females have the power) and we will try to explain why you are a mixture of both, he said, his eyes shining. So someone who doesn't want to hear about being cousins ​​with great apes, it's not a good idea to come and see my show [laughs]. »

The title NOMO Sapiens< /em> refers to the comedian's desire to talk about “human intelligence and stupidity”. The NO evoking the nono that lies dormant in each of us.

“I bring science into humor, continues the artist of Senegalese origin who arrived in Rimouski in 1991. I wanted to ask myself how we became a very intelligent species capable of doing terrible bullshit at the same time!

It made for a “very funny, despite the complex subject matter” show, into which he proudly slipped nods to the feminist struggle. His ultimate desire remains that of touching his three targets of the human body: the spleen, the mind and the heart.

“Laughter is a fan to evacuate the overflow of heat in the brain which is hyperactive, believes the one who has always had a propensity to laugh and to to make laugh. Laughter allows us to escape from this, from the hassles of everyday life too. It is good for physical and mental health. Laughter gives us a little respite”

This overheated brain sometimes needs to be put on pause and the intellectual Boucar Diouf is certainly not one to judge other types of humor.

“I wouldn't not, but I'm campaigning for it to exist, he says, addressing the recent saga sparked by the comedy show LOL and its scatological jokes. There are people who love it and they should not be denigrated. Just as there are people who won't come to see a show that talks about evolution.”

Little Boucar, who grew up with an illness that attacked his right leg preventing him from playing soccer with his brothers, learned early on to divert attention through humour. “I was competing in spirit and that stayed,” says the artist, whose dream is to take to the stage at Place des Arts for his 60th birthday.