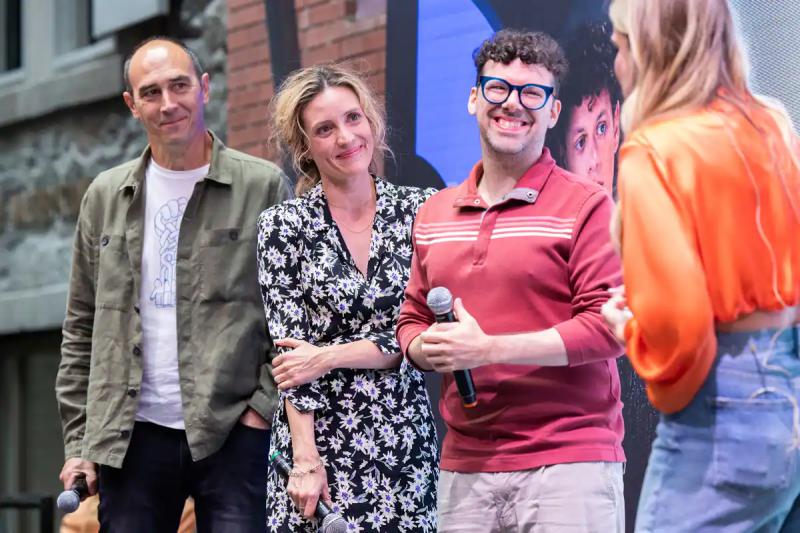 Noovo wants to seduce viewers this fall with two new series, “Chouchou” and “A Criminal Affair”, in addition to continuing in the humor niche with its novelty “Le maître du jeu”.

In terms of dramatic fiction, the Bell Media channel will offer “Chouchou” (Wednesday, 8 p.m.), the first series for adults by Simon Boulerice in which a 37-year-old French teacher (Evelyne Brochu) will develop a “devouring passion” for a 17-year-old student (Lévi Doré), which will lead him into a descent into hell. Evelyne Brochu said she was seduced by “the density of things to defend” as an interpreter. “The consequences of this love will act on a panoply of characters in an extremely different, rich and powerful way”, according to her.

In “A Criminal Affair” (Tuesday, 8 p.m.), which Crave subscribers have already been able to discover, the character of Céline Bonnier will try to clear her son, who has been languishing in prison for years for a crime he did not not committed.

We will have to wait until winter to get our teeth into the dramatic “The Emperor”, which will take place over 10 years, before and after the #MeToo movement. Michelle Allen's series will bring together Jean-Philippe Perras, Noé Lira and Macha Grenon, among others.

Also in January, it will be the turn of “Turn: double fault” to take the air on Noovo. Éric Bruneau and Louis Morissette are in the middle of filming, sequences having even been boxed at the IGA Stadium during the National Bank Open. The two collaborators also wrote the texts and exchange the ball on the set, the first as a professional tennis player and the second in the skin of his trainer.

Noovo will present this fall “Les vigilantes” (Friday, 8 p.m.), a program in which three female lawyers hear Small Claims Court cases. They will deliberate in front of the cameras and it will not be easy.

In terms of humor and entertainment, “Le maître du jeu”, an adaptation of the British “Taskmaster” format, will star Louis Morissette as the master and Antoine Vézina as his assistant. We will see Mehdi Bousaidan, Jo Cormier, Eve Côté, Christine Morency and Matthieu Pepper lend themselves to all kinds of tests and incredible challenges.

Who knows how to sing” (Monday, 8 p.m.) will return with Phil Roy at the helm. The latter promised small changes, but even more fun, especially during the season premiere, a country special that will bring together Paul Daraîche, Matt Lang, Mitsou and Annie Villeneuve. “Club Soly” (Monday, 7:30 p.m.) also returns.

Jay Du Temple and the singles of “OD” are already in Martinique in preparation for the new season, which will be presented from Sunday to Thursday , at 6:30 p.m., before giving way to the novelty “Les Fridays OD”.

Finally, Julie Snyder will be back for the fourth season of her talk show “La Semaine des 4 Julie” (Monday to Thursday, 9 p.m.). Michèle Richard – with whom Julie went camping in appalling conditions –, Jean-Luc Mongrain, Preach and Martin Vachon will join the collaborators. Julie Snyder said the season will start with Cole Caufield and Nick Suzuki of the Montreal Canadiens. “This summer, I 'chilled' an afternoon with Justin Trudeau on the islands, on the edge of the 'beach'”, she revealed, saying that the Liberal leader was going to see the family of Jean Lapierre and that she didn't miss it.

It's September 11, at 8 p.m., that Marie-Lyne Joncas and Julie Snyder will pilot Noovo's back-to-school program, which is called “The fabulous comeback”.