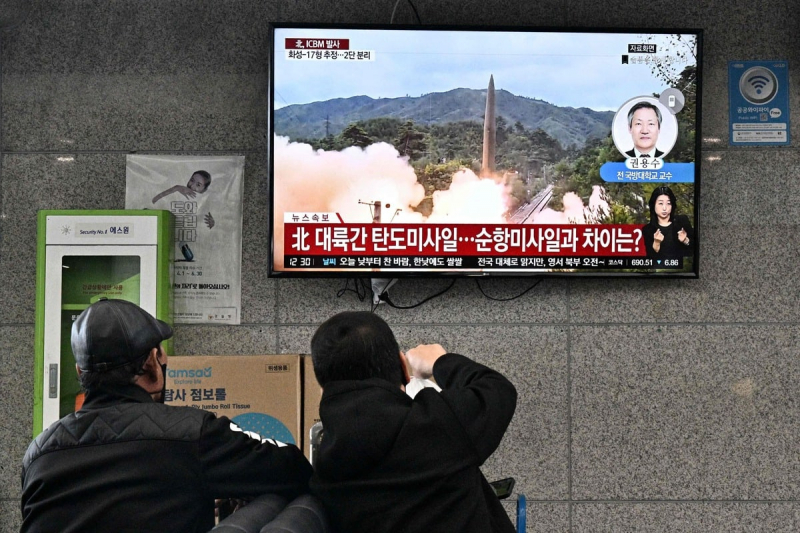 A ballistic missile was fired by North Korea on Wednesday, the latest launch from Pyongyang after a record series of weapons tests earlier this month.

The South Korean military said it had “detected a short-range ballistic missile launched by North Korea (into) the East Sea (also known as the Sea of ​​Japan , editor's note) from Sukchon, in the province of South Pyongan, around 3:31 p.m. full readiness while cooperating closely with the United States,” she added.

The missile was detected with “a flight range of about 290 km, an altitude of about 30 km and a speed of about Mach 6”, according to the South Korean military.

The government Japanese confirmed the launch, writing on Twitter that Pyongyang “launched a suspected ballistic missile”.

The launch came as the United States was counting the votes for the elections for the House of Representatives and the Senate. Seoul's intelligence services had warned that North Korean leader Kim Jong Un could conduct a nuclear test on this occasion.

Earlier this month, North Korea carried out a flurry of launches including an intercontinental ballistic missile, which Seoul said apparently failed.

Pyongyang also fired a ballistic missile that breached the line serving as the de facto maritime border between the two countries and fell near the territorial waters of South Korea.

South Korean President Yoon Suk-yeol called the firing a “territorial invasion” at the time. in fact”.

The two launches were part of a streak opened on November 2 in which Pyongyang fired 23 missiles, more than in all of 2017, when Kim Jong Un and former US President Donald Trump violently attacked each other. attacked by state media and Twitter interposed.

“If you look at the behavior of North Korea since September 25, it has used a lot of money to constantly raise the tension, so it must maintain it,” observed for AFP Park Won-gon, professor at Ewha University in Seoul.

Pyongyang's launch of a ballistic missile on September 25 kicked off a series of launches, including an intermediate-range ballistic missile that flew over Japan. Pyongyang then claimed that these were “tactical nuclear exercises”.

“Finally, there will be a seventh nuclear test. Even if the joint maneuvers are over for the moment, it is unlikely that North Korea will reduce tensions,” said Park Won-gon.

The wave of fire in November came as hundreds of U.S. and South Korean military aircraft, including B-1B heavy bombers, took part in the largest joint aerial maneuvers ever conducted by Seoul and Washington. Called “Watchful Storm”, Pyongyang called them “aggressive and provocative”.

Pyongyang has stepped up its missile strikes in response to these drills. This type of maneuver has long provoked virulent reactions from North Korea, for which it is a rehearsal of an invasion of its territory.

“It appears to be running tests (to find out) where to deploy its strategic military units and mount tactical nukes for its next nuclear test.”

Seoul and Washington have been warning for several months that the North Korea is preparing to conduct another nuclear test at any time, which would be the seventh in its history.

But experts question the usefulness of trying to predict the exact moment during which it will will take place.

“How can this go on for so many months now? The reality is that the (Democratic People's Republic of Korea) needs more testing to achieve the goals it has set for itself. Not just one, but many,” she wrote, referring to the official name of North Korea.