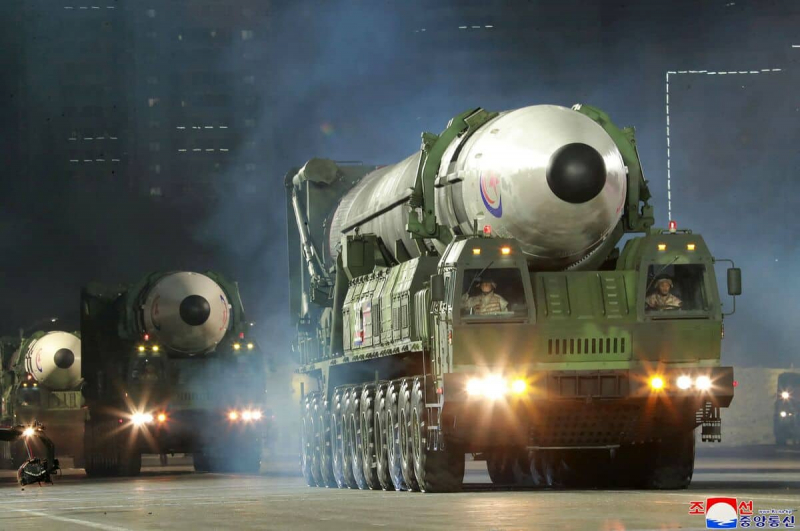 North Korea fired a barrage overnight from Thursday to Friday on a maritime “buffer” zone near its border with the South, according to Seoul, a new episode in the spectacular rise in tensions in recent days on the Korean peninsula.

Seoul and Washington have extended their largest-ever joint air drills, which involve hundreds of warplanes on both sides, until Saturday after an apparently failed intercontinental ballistic missile (ICBM) launch. by North Korea Thursday morning.

Shortly after the announcement, as of 11:28 p.m. local time on Thursday, the Seoul military detected around 80 artillery fire from the North in a maritime “buffer zone” from the Kumkang area of ​​Kangwon province on the coast. east of the country.

The barrage is “a clear violation” of the 2018 inter-Korean agreement that established these buffer zones to reduce tensions between the two sides, the state said. South Korean major.

The United States denounced “the illegal and destabilizing firing of an intercontinental ballistic missile”. Seoul and Washington have vowed to take further steps to demonstrate their “resolve and capabilities” in the face of growing threats from the North.

Pyongyang fired around 30 missiles on Wednesday and Thursday, one of which ended its run near southern territorial waters for the first time since the end of the Korean War in 1953.

Pyongyang's provocations, “especially during our period of national mourning, are against humanity and humanism,” Lee Hyo-jung, a deputy spokesperson for Seoul's Unification Ministry, argued on Friday. a reference to the stampede that killed 156 people in Seoul during Halloween.

“The government strongly condemns North Korea for its continued threats and provocations, based on our annual and defensive drills, raising tensions around the Korean Peninsula,” she added. She attributed the rise in tensions to Pyongyang's “reckless nuclear and missile development”. aggressive and provocative military attack targeting the People's and Democratic Republic of Korea”, denounced Wednesday for its part the North Korean regime, which threatened Seoul and Washington to “pay the most horrible price in history”.

< p>North Korea has traditionally viewed U.S.-South Korean military maneuvers as dress rehearsals for an invasion of its territory or overthrow of its regime.

Analysts attribute Pyongyang's particularly furious reaction to this this time to the use, during Vigilant Storm, of cutting-edge F-35A and F-35B stealth aircraft, seen as an ideal tool for conducting lightning “decapitation strikes” against North Korean leaders. /p>

North Korea had already, in September, revised its nuclear doctrine to allow itself to carry out preventive strikes in the event of an existential threat against the regime of Kim Jong Un.

If the “system of command and North Korea's nuclear control center is “endangered by an attack by hostile forces, a nuclear strike will be launched automatically and immediately,” the new doctrine says.

Seoul and Washington have been warning for months that North Korea is preparing to carry out a nuclear test, which would be its seventh.

In addition to the “Vigilant Storm” exercise scheduled until Saturday, the South Korean army has announced that it would proceed next week with its annual “Taegeuk” exercise intended to “enhance wartime performance” and crisis management.

This is a computer-simulated exercise conducted to reinforce “the ability to conduct practical missions in anticipation of various threats such as nuclear weapons, missiles and recent North Korean provocations,” according to the South Korean military.