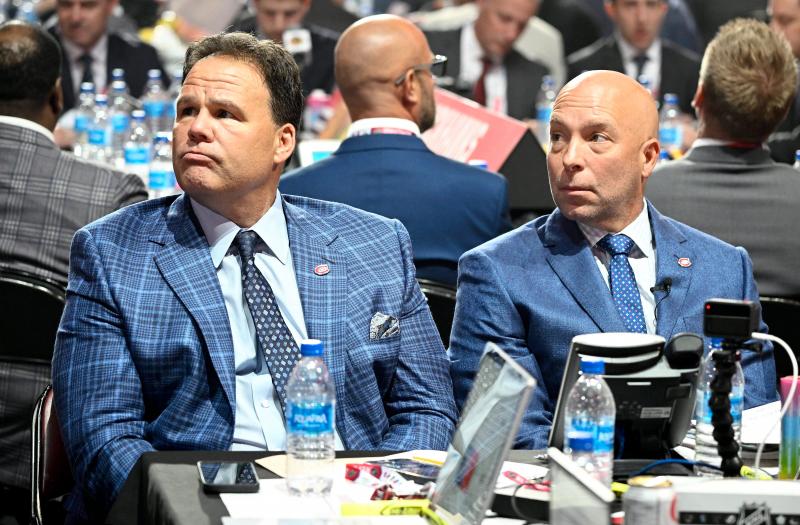 In the space of a few months, Kent Hughes and Jeff Gorton not only implemented a new administrative management, but they also managed to solve many problems, particularly in terms of staffing.< /p>

No wonder people are saying behind the scenes that the Canadiens have a surplus of skaters and that the organization's decision-makers will have to be kept in check. In the current environment, with a salary cap that invites general managers to find new ways to circumvent the obstacles, Hughes and Gorton did not hesitate to make decisions oriented towards the acquisition of young players responding to the program of the recovery. of the attack. Therefore, having a surplus of skaters is not a luxury, it is a necessity as long as we know how to deal with the salary cap. And, on this level, they succeed very well.

The Carey Price file now allows decision makers of the Canadian to study multiple scenarios and have the ability to get the best results out of them.

On the agenda, there will be Cole Caufield's contract. Also, it will be necessary to release the payroll from contracts that do not correspond in any way to reality. The arrival of Kirby Dach and Sean Monahan changes the situation. They are young, Monahan, after all, is only 27 years old, they certainly represent players who have been in trouble for the past few years, on the other hand, aren't they a threat to some veterans? Don't they give more latitude to Habs decision-makers in the transfer of certain personnel?

Hughes and Gorton will not rush the process of reviving the company, but they have nevertheless given themselves the means to provoke events and work with a more balanced salary plan.

The question was asked this week: will Nathan MacKinnon become, in a year, the highest earner in the National League?

Will he surpass Connor McDavid?

The answer is yes. On the one hand, because he now has a championship on his resume. Because he is the great leader of his formation. Because he's at the peak of his career.

MacKinnon has been a real boon to Joe Sakic and the Colorado Avalanche over the past few years. Now it's going to checkout. In other words, it will be the return of the elevator.

With a more rapid increase in the salary cap, and following the latest decisions made by Sakic, Avalanche decision makers have predicted that MacKinnon will likely demand a contract in excess of $12M per season.

News from Vegas: Phil Kessel may wear a different bib next year. Number 81 belongs to Jonathan Marchessault and the Golden Knights player has no intention of giving up his bib to Kessel. Why would he? After all, wasn't Marchessault a player who marked the young Golden Knights franchise?

So the New York Islanders don't want Zdeno Chara anymore. That was to be expected, especially after the events of last year when the team was kicked out of the spring tournament. However, Noah Dobson, a young defender for the organization, will have benefited from Chara's advice. Will he find another training? Does he still intend to lace up the skates for another season? No matter what decision he makes, he will have had a wonderful career…

Mike Babcock had decided last winter to pilot the formation of the University of Saskatchewan, question of remaining in sight of the teams of the National League. But it doesn't seem to have worked out and he has just announced that his coaching career is over. We can understand it. With the many changes made to the coaches in recent months and the fact of not having been asked, it was clear that the general managers had decided in the case of Babcock. His character and his relationship with the players did not help his cause. Nevertheless, Babcock will have allowed coaches to see the salary scale climb dramatically…

We dream in Toronto< /em>

Patrick Kane has many players in the entourage of the Toronto Maple Leafs salivating.

Well, well, for the past few days, we've been dreaming in Toronto. Stakeholders attached to Maple Leafs coverage believe the organization should focus its efforts on getting Patrick Kane out of Chicago.

So despite having three players earning more than $10 million, it's not enough. Kane's arrival would change the situation.

As far as I know, the Tampa Bay Lightning did not have players earning more than $10 million during the two Stanley Cup conquests. Neither did the Colorado Avalanche. The same goes for the Capitals and the Blues.

Certainly, Kane is an exceptional player. He won the Stanley Cup, three times in addition. But, to obtain his services, one will first have to hunt a high wage earner. And, if I remember correctly, Kane is not a goaltender.

The Canadiens had a $10M goaltender in 2021. Carey Price outclassed the Leafs' big stars.

The real problem for the Leafs is in terms of the competitive spirit, knowing how to leave the comfort zone they love so much during the regular season and accepting what the playoffs require: courage and determination.