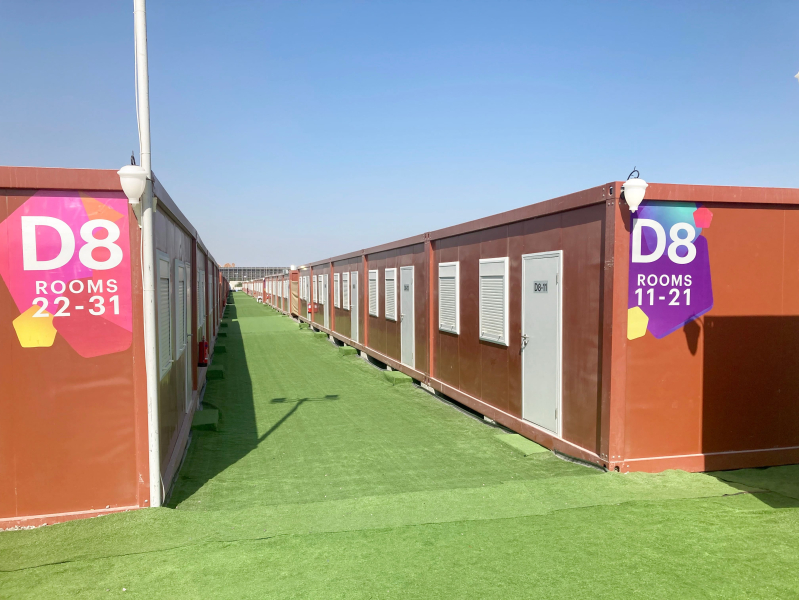 DOHA, Qatar | You thought that was what it was, but that's not what it was. Why are you being given a chorus by the Quebec hip-hop group Alaclair Ensemble? Because that pretty much sums up the experience of many visitors who have chosen to stay in one or other of the fan villages that are scattered all over Doha.

< p>For a sum of around US$200 a night, they are housed in containers that have been furnished with two beds and a small bathroom.

Some villages are more made up of tents. In the desert, we remind you.

The experience was not up to par for hundreds of amateurs, the disconcerting stories have been numerous for a week.

We therefore decided to go and have a look at it for ourselves to get a feel for it.

We went to the Free Zone village which is about fifteen minutes by metro from downtown Doha.

Once out of the metro entrance, you have to walk near a ten minutes in a parking lot under a blazing sun to reach the village, which includes several hundred containers of various colors.

On site, there is no queue, it's clean and you can see partisans seeking shade.

The village is big, very big even.

To walk the central aisle from end to end, it takes about ten minutes.

In fact, two Canadians passed by tell us that they had to walk nearly a kilometer to go to their room after the game and the disappointment on Sunday evening.

“Otherwise, the check-in took two minutes”, says one of them.

No ticket for a game, no big deal. The games are broadcast on a giant screen in the fan villages in an equipped space. A bit of comfort under a blazing sun.

The main flaw of this village is that it was installed in the middle of the desert, so it is a huge island of heat where shade is rare.

But we must admit that the village offers many services.

There is a central place to watch the matches on a giant screen.

There is also some entertainment.

Soccer fans who stay in these villages find different shops for their needs, even a Starbucks coffee kiosk

In addition, the food offer is more than decent, with many options. There is even a Starbucks.

And there is an on-site pharmacy for basic necessities.

This visit, during which it was not possible to visit the interior of a room, contrasts with certain horror stories that have emanated from these villages in recent days.

First there is the wait.

Check-in was nightmarish in many cases and a Quebecer we met the day before, David Dicso, confirms this.

“When we arrived early in the morning, around 4 or 5 o'clock, we saw lines of people. We spoke to English people who had been waiting for four hours and they told us that there were no keys. It was therefore overbooked, and yet we had booked everything since July.

“Moroccans explained to us that they had been waiting for five hours, that they had to register on the 25th and it was already the 26th. We ended up understanding that the people who were already in the village decided to stay longer. »

Besides the long queues, stories about the cleanliness of the place abounded.

“We are in the village of Baraw and our apartment has been flooded for two days. We gave up and went somewhere else,” people told Australia's The Sun newspaper.

In their case, it's understandable. The floor was full of waste water due to a leaking toilet and they had no hot water.

In the case of the village of Zafaran, located a stone's throw from the Lusail stadium, travelers arrived to find that the small apartments were not ready to be lived in, even after the start of the World Cup.

One supporter even created a TikTok account, fanvillageqatar, which he uses to document his misfortunes since arriving in the village.

In a condo rather than in the village

David Dicso and Marc-Olivier Lafontaine-Côté are in Qatar to support Canada and experience the frenzy of the World Cup .

DOHA, Qatar | David Dicso and his friend Marc-Olivier Lafontaine-Côté had to stay in a container at the Free Zone fan village. They never set foot in their small apartment.

They arrived there before sunrise on Saturday and found that there were several hours of waiting just to get a key.

“We were tired, we hadn't slept on the plane, we were suffering from time lag and we couldn't put our suitcases down. It was very early, I can only imagine what it was like at 4 p.m. during the official taping,” David said.

And by asking questions around them, they realized that the village had accepted more reservations than there were places available. In addition, some received a key for a single room when they needed two.

David and Marc-Olivier then received an intriguing offer. Enough to hop on an Uber and see what it was all about.

The exterior view of the condo where the two guys are staying in a brand new neighborhood.

“A lady from FIFA came to see us, offered us a shuttle and a condo 15 minutes away, explains David. She showed us pictures and it was beautiful.

“From what I understand, these are condos that have not been rented because there are not many people compared to other World Cups.

But there was already a little surprise at check-in even though they didn't have to pay a penny more.

“We were asked for our payment voucher [which proved our purchase in the village] and we were told that it was a shared apartment, so we are with a family of Australians,” explains David.

They are therefore well housed for a few days in a brand new condo. It's so new that the plastic film that protects the kitchen cabinets has not been removed.

“It's beautiful and luxurious, but it was done quickly and there are gaps everywhere. In the kitchen, there is a water leak under the sink and it is continuous. I have to mop up with a towel,” says David.

And as for a private space in a shared condo, we'll come back.

“When we wanted to leave and we wanted to lock the door, we realized that the keyhole is not aligned with the latch of the door of our room, so we can not lock it. We're waiting for someone to come and fix it.

Marc-Olivier is only in Doha for a week, but David will be there for three weeks. He will spend a few days at the condo and then settle down for a few days on a cruise ship that moors at the port.

“I have to go back to spend other days in the village during my stay”, admits- he.

The enthusiasm is not particularly there, especially since when he left for the condo, he received a clear message from the employees.

“In the village, all the people who worked there told us not to stay there and go to the condo complex. »