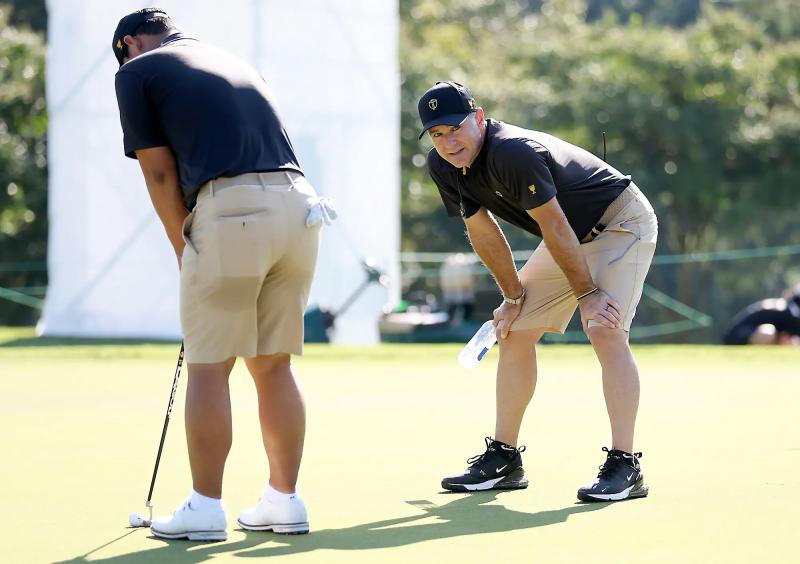 CHARLOTTE, North Carolina | A real tour de force. This is what the international team must execute perfectly in this near impossible mission at the Presidents Cup. She must knock out one of the best American teams in history. Nothing less.

Trevor Immelman's men wear the underdog label this week at the ultra-long Quail Hollow course in North Carolina. A label written in large, bold letters, highlighted and underlined as a bonus.

Because on paper, they have no chance of defeating the team led by Davis Love III, whose hard core inflicted a severe correction on the European team at the Ryder Cup exactly 12 months ago.

Eight of the 12 international players have no experience of this competition so the best of them is ranked 17th in the world. And it should not be forgotten that they are stripped of the services of the third golfer in the world, Cameron Smith, who decided to leave them for the money by crossing over to the dark side with LIV Golf, supported by Saudi funds. < /p>

Despite all these pitfalls at the dawn of this 14th Presidents Cup, the internationals are not waving their white flag. Far from there. They want to surprise as so many underdogs have already accomplished feats in the world of sport.

United and driven by an unparalleled energy, they are ready to go to war on the course of 7576 yards. History will then write itself over the next few days.

“We have absolutely nothing to lose,” thundered Captain Immelman at a press conference yesterday. You don't have to fear the consequences. These guys have been kicking their ass since they were kids to compete in this type of competition.

“I want my guys to be confident in themselves and to be able to believe in themselves. But I also want them to have fun and savor every moment. »

As mentioned during the team's final announcement two weeks ago, Immelman has repeatedly revised his plans with international golfers who have deserted the PGA Tour to join LIV Golf. As it is a PGA Tour event, they cannot participate.

While the dice are on, Immelman couldn't be more comfortable.

Nothing is impossible. In 2019, the internationals gave the Americans a good scare on the Royal Melbourne course in Australia. The group then piloted by none other than Tiger Woods won 16-14.

United for a long time, they landed in Charlotte with contagious energy. A few weeks ago, they had surveyed Quail Hollow for a few days during a team activity.

In his 10th appearance at the Presidents Cup, a record, point guard and dean Adam Scott does not even need to turn them on. All he has to do is settle into the ship and row in the same direction.

“They are so enthusiastic and excited,” said the 42-year-old Australian, who has 19 career points . They're so catchy it's refreshing. We also saw it in Melbourne. We managed to fight a good battle.

“This week, the young people have absolutely nothing to lose, added the one who is flanked by the Japanese Hideki Matsuyama among the veterans. This is their stage. They can demonstrate anything. I believe if we want to push the Americans to a place where we can win, we have to know how to have fun on the course. »

The internationals are indeed a team capable of standing out in Quail Hollow. They combine power and precision. They will have to control their putter on the greens and collect the precious points.

Thus, they will be able to write the chapters of their almost impossible story.

Each of the two teams (USA and international) plays only one ball at each hole. Golfers alternate running until the ball drops into the cup. Tee shots are hit alternately with one teeing off even holes and the other teeing off odd holes. The team with the lowest score wins the hole. If both teams record the same score, the hole remains tied. At the end of the game, if the tie persists, each team scores a half point.

Each golfer of the two teams (United States and international) on the same foursome each plays his ball. So four balls are still in play at each hole. Each team records on the card the lower of the two scores of the players at each hole. The lowest score wins the hole. If the lowest score is tied with the opposing team, there is a tie. At the end of the match, if the score is identical, each team scores a half point.

Each match pits one player against from the American team to the international team. The player with the scorethe lowest wins the hole. If the scores are the same, the tie remains. At the end of the match, if the score is the same, each golfer earns half a point.

The 16th green under consideration

On a very hot day in September, under a blazing sun and a temperature exceeding 35 degrees Celsius, Canadians Corey Conners and Taylor Pendrith studied the green of the 16th pennant, a par 5 of 592 yards, for a good thirty minutes in training yesterday. Decidedly, they will opt more to the left to attack the pennants during the tournament, because the clearance area in front of the pit on the right of the green restricts strategies. Whether with a putter or a wedge in hand, the approach is tricky from the right. They studied the subtleties of the place at length as many matches could end there during the competition.

Since May, it has been difficult to avoid the elephant in the room during a professional tournament. Last Friday, golfers at LIV Golf sent a letter to World Rankings President Peter Dawson urging him to make a decision so they can generate ranking points, and have been doing so for the first tournament in June. The missive caused a stir. Dawson recently recalled that the application for LIV Golf, filed this summer to become a recognized circuit, is continuing its journey and that it is being studied with accuracy. It should be remembered that LIV must meet many criteria before being recognized, including the game format.

Very talkative on this subject for months, Billy Horschel has once again delivered his opinion.

“As I said before, they had to weigh their decisions and what they left behind when they joined this circuit. Just like the things they could no longer receive in the future. They made their decision to sign their contract and take the money.

The lack of a point awarded in the world rankings is among the consequences of their decision as the league powered by money from Saudi Arabia's Public Investment Fund seeks to short-circuit the beacons of the sport.

It should be remembered that golfers who have joined this league cannot participate in the Presidents Cup.

A walk on the course of Quail Hollow reveals the richness of the magnificent place. On the par 5 of the seventh hole are aligned impressive properties. The castle near the green catches the eye with its architectural beauty. It was a wealthy lawyer, Stefan Latorre, — founder of a large firm in the southern United States, who bought it in 2018 for the sum of $5.3 million. Among his neighbors is Rick Hendrick, owner of the Hendrick Motorsport team in NASCAR, whose property is estimated at $6.5 million.