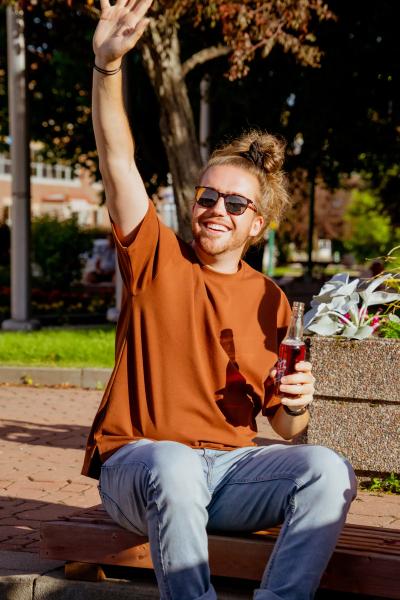 Mathieu Dufour has had the wind in his sails – and in his magnificent blond hair – for some time now. Nothing seems to stop him or block his way.

Still hovering under the effects of his “beautiful and big cloud” from the show he gave at the Bell Center, as part of the 40th Just for Laughs Festival at the end of July, the 27-year-old comedian did not hide his excitement to enter Netflix soon.

His show at the Bell Center has indeed been captured by the webcasting giant and will be condensed into an hour and adapted into a “Netflix Special” format.

But before agreeing with the platform, the comedian and his entourage had initially approached a Quebec broadcaster, who withdrew from the project at the last minute. When they had already started filming, the Quebec producer would have let him down, believing that the project would “finally not be a good idea”, shared Math Duff in an interview with the QMI Agency, a few days after his Center Bell.

Instead of being appalled by this refusal, the comedian rather saw it as an opportunity to go elsewhere, and further. “When I'm told no, it's just because life wants to take me somewhere else […] I don't see it as a failure or something negative. Life is well done and there is always a reason for everything,” he said.

The Saguenean comedian who experienced monster popularity with its “Live Instagram” during the pandemic confinement – ​​its famous “Show-rona Virus” -, does not seem to have limits to its ambitions. He does not see his Bell Center as a “consecration”. For him, it's more of a big project among other big projects that are coming.

“All projects are big compared to the love you give them, he explained. When I embark on something, I never embark halfway. It may be a show in a 100-seat hall, but I'm going to give it my all and it's going to be the best night for these people.”

Jonquière: back to basics

The comedian from Jonquière will be on the show “La belle tour” on Monday evening for the Saguenay special. An expedited filming – it was on the air on the radio the same day as well as the next day -, but at the same time exciting and comforting, which gave rise to “beautiful encounters and very beautiful conversations”, he said. underlined.

It was also the first time he was going to do a shoot of this magnitude in his region. “I remember that when I lived in Saguenay, and there were film shoots that came like that to the regions, it was so rare for it to happen, it was really a great frenzy in the city,” said Mathieu Dufour, adding that he felt grateful to see that people from his region were there and present at the rehearsals.

For Mathieu , it is the people and the landscapes that make the charm of the region.

The release date of his Netflix special will be known soon.

In the meantime, the episode of ” The beautiful tour” in Saguenay–Lac-Saint-Jean, with Marc Déry, Gabriel Bouchard, Jeanik Fournier and Gab Paquet, will be broadcast this Monday evening at 8 p.m. on TVA.