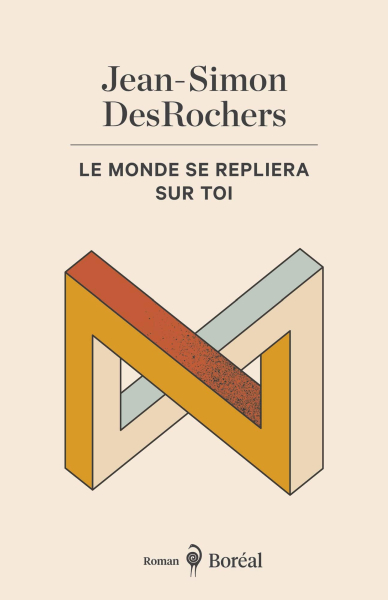 We are connected by so many gestures and coincidences that we can circle the Earth just by following them. Here is a breathtaking demonstration.

The novels of Jean-Simon DesRochers are full of people: people who rub shoulders without knowing each other like the tenants of a building in La canicule des poor, the victims of a pile-up in The hourglass of solitudes, a whole neighborhood in The dark year.

The choral enterprise is conducted with virtuosity each time.

With The World Will Fall Back On You, DesRochers takes us on a new challenge: we will literally go around this world! A thin thread, made up of fortuitous encounters, will connect some fifty characters scattered across the continents. The Earth is suddenly very small.

Especially since the starting point of the story will also be the point of arrival. This point is a duo: Noémie and Clio, residents of Montreal.

Noémie is an interpreter, mother of Clio and wife in the process of divorce since the confinement went through it. And on September 24, morale is not there at all. Turning on the radio doesn't help: another suicide bombing, this time in Bonn.

Clio, 12, is also grumbling. She makes her mother carry all the weight of parental separation, and at school, she can't stand the nice William who hangs around her.

William is hurt by this and his teacher is going to take the hit – but harder than the opening joke let on. This will lead to… Paris, to a Caroline whom Charles-Étienne's motorbike narrowly avoids.

Manuella has seen it all from the window of her café, a small break in the routine. It's her birthday, but who knows, except her cousin who sends her an animated GIF from New Zealand.

And it starts again!

So here we are. On the next bounce, we cross to Vancouver, then it will be Toronto before returning to Montreal where Clio wakes up with a start. She “is unaware that the chain of events that woke her from her sleep took three months to circumnavigate the planet before falling back on her”.

Too easy? DesRochers then repeats the course. This time, Paris will lead to China then to Ethiopia, Brazil, Mexico, or India and Ukraine…, and yet it will still end in Montreal.

And what do we discover, ricochet after ricochet? The violence of the world: loneliness, frustrations, revenge or the search for love online, ecological devastation, terrorism.

All of this is experienced by people rooted in their culture and who, however, do not disfigure the common thread woven by DesRochers. He even gives such consistency to his characters that one has the impression of knowing them, when only a few pages are devoted to them. A great success.

When the world stops falling back on Clio and Noémie, it's Christmas, a clichéd day of hope. Why not: that's also what we have in common.