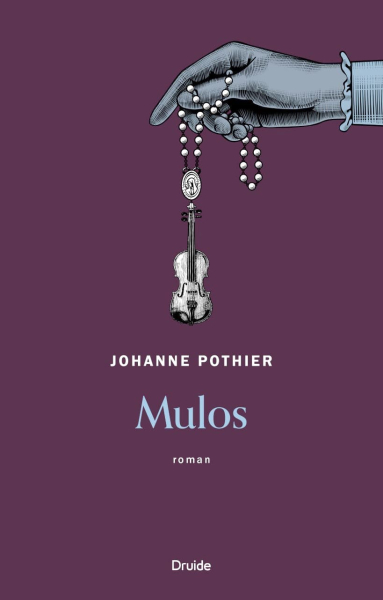 The Second World War belongs to a world whose memory is fading. In Mulos, she nevertheless serves as material for a very contemporary novel.

Jeanne, the character center of Mulos, is an elderly woman. We would even like to say a “little old woman” as she seems physically fragile and expresses herself in a disheveled way.

She has also been living in a psychiatric hospital for years. But recently, a woman comes to collect his words. What troubled times then rise to the surface!

Jeanne is a survivor of the concentration camps. She was found there as a child by soldiers, among whom was Maria, a Quebecer who could not bring herself to abandon the little one who had clung to her skirt.

When she returned from n Europe, Maria becomes a nun and installs Jeanne in the orphanage where she has been assigned. The little girl does not speak, but she has an exceptional talent for the violin. This brings her closer to another little orphan, also gifted for music: the blonde Suzanne. They become inseparable.

Their friendship, however, is impossible. Because Suzanne also comes from Europe, but from another type of camp: the Lebensborns. These maternities were dedicated to the production of children who met, from their conception, the criteria of Aryan purity. Hence the blondness of the little girl.

The two friends know nothing of this story, but even in an orphanage in Trois-Rivières, the distinction counts. Suzanne's Alsatian grandmother keeps watch and supporters of the Hitler regime have found refuge in Quebec.

The weight of history

Johanne Pothier recounts with sensitivity these two destinies of women who were destined to hate each other and who fell in love with each other – until everything becomes more complex because of the crushing weight of History.< /p>

Pothier thus lifts the veil on aspects of Nazism that are not often highlighted. This system attacked not only the Jews, but also the Gypsies, which was the brunette Jeanne. And the Lebensborns are still little known, they who have only been studied seriously for about forty years.

By giving such a past to the two little girls, Mulos therefore demonstrate of pedagogy. The story is not, however, weighed down.

By going back and forth in Jeanne's memories, we follow with curiosity her evolution as a concert violinist and especially her relationship with Suzanne, wondering how the truth will come out.

To which is added the pleasure of a text where the words glide smoothly, even in the harshest and yet necessary scenes. A sense of harmony that the author draws from her past as a musician which led her to the direction of the Trois-Rivières Music Conservatory.

Since then, she has turned to writing novels; Mulos is his fourth. The title means “ghosts” in the Romani language and it is salutary to remember that even in Quebec, some have been, and still are, haunted by it.