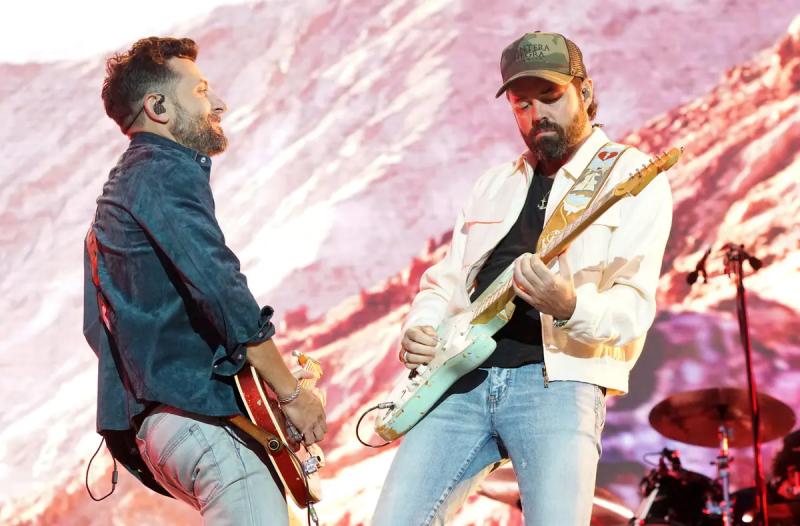 After a two-year postponement, the Lasso festival finally took off yesterday in Montreal to the delight of country music lovers.

The cool day did nothing to dampen the enthusiasm of country fans for the first in Quebec of such an event in an urban environment. It was also amazing and nice to see so many people decked out in cowboy and cowgirl boots and hats, bolo ties, bandanas and checkered shirts in the middle of the afternoon, in the subway train of the yellow line to go towards Parc Jean-Drapeau.

The crowd was large for singer Blanco Brown.

Old Dominion on the attack

Old Dominion at the Lasso Festival in Montreal on August 12, 2022.

Expectations were high for Old Dominion, this American group formed in Nashville in top of the charts and who has won a plethora of prizes, visiting Montreal for the first time. The five members frankly did not disappoint. They kicked off the night with Make it Sweetbefore Matthew Ramsey, with sparkling eyes, goes to sing directly to the crowd Never Be Sorry and the latter finishes, alone, the words of No Such Thing as Broken Heart >. Old Dominion delivered a most energetic and festive show with rock and pop accents. The complicity of the band members was more than palpable, especially between Matthew Ramsey and guitarist Brad Tursi.

The charming Ashley McBryde came to tell her story with her beautiful deep voice cut out for country. Onlookers tapped and nodded as she delivered songs from her popular American Scandal repertoire to From Little Dive Bar in Dahlonega to Whiskey and Country Music. The American singer offered a show where she was obviously having fun, not hesitating to put forward the three guitarists who accompanied her.

The exploded Blanco Brown proved to be very surprising in delivering his eclectic universe where hi-hop and country are intertwined and at times the soul. Sporting a fox tail at the waist, the singer had the crowd flapping his arm, dancing to Do si do, High Horse or Just the Way< /em>, and sings of great hits, from A Thousand Miles by Vanessa Carlton, to Live Your Lifefrom T.I. to Outkast, where he had a fun competition with his DJ. He even charmed by offering red roses to some women in the audience while performing I Need Love and surprised with impressive vocals on a remix of Soul by Lee Brice .

The Quebecer started her show with the festive song Chez nous c’est Ski-Doo, taken from her homonymous album. The singer-songwriter then introduced herself through the lyrics of the song Baseball, performed with a jubilant interlude from the theme song of Watatatow. His contagious energy quickly enlivened the crowd, especially his complicit interactions with his guitarist-banjoist, who brought a nice bluegrass touch, and with multi-instrumentalist Dave Chenel, gifted both on violin and piano. At the time of publishing this text, the American superstar Dierks Bentley, headliner of the day, was starting his show.

WHAT ABOUT THE NEW CONTEMPORARY COUNTRY?

It is difficult to define the “neo-country” or new country without locking it into a straitjacket. “New country is generally more pop-sounding. It’s more accessible music, with more catchy melodies,” explains Audray Johnson, programming coordinator at evenko. It also occasionally draws on folk and rock.

There are still passes available for Saturday. LASSO can also be an original family outing, with children aged 10 and under admitted free. For festival-goers who want to put on the costume, cowboy hats can be found on site, some of which light up in the dark, at a cost of $40.

A EQUAL AND DIVERSIFIED PROGRAMMING

“People see country as a very masculine world. It was important for us to change this perception of offering equal programming that also stems from diversity,” explains Patrick Guay, programmer at evenko and head of programming. In the afternoon, artist Lily Rose, a rare openly gay artist in the milieu, performed on the Coors prairie stage.