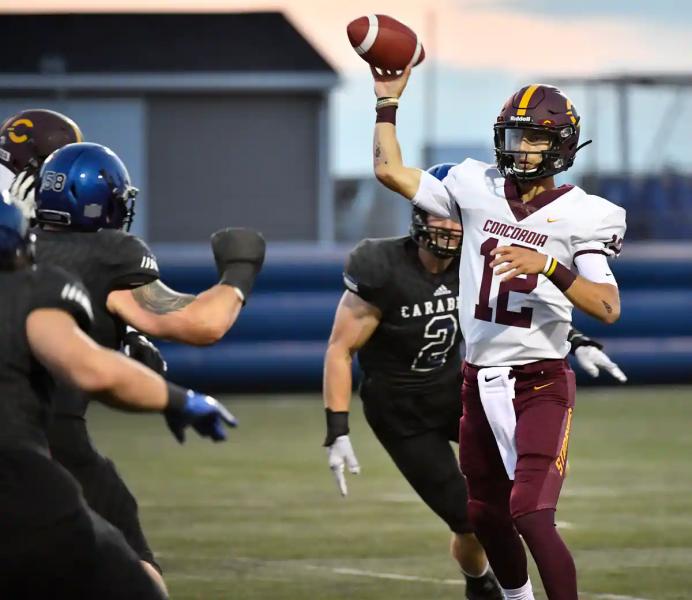 After having a fantastic 2021 season, Concordia Stingers quarterback Olivier Roy thinks he can do even more on his second run as a starter. < /p>

The 23-year-old earned RSEQ MVP honors last year after amassing – with his arms and legs – 2,788 yards and 20 touchdowns.

“I have the impression that things are going slower in front of me. I'm less stressed, analyzed Roy at the end of his family's training camp. My role has also evolved, since I help others better understand how things are done.”

Despite this new confidence, the native of Donnacona knows that he must now meet expectations.

“I feel extra pressure internally from coaches, my teammates and myself; I expect more from me, he revealed. This will also be the case for the other teams. It's a new situation for me, but I've always been able to adapt and I welcome the challenge with open arms.”

Indeed, Roy has proven in the past that he was a master at adapting and surprising. Recall that during his first moments with Concordia in 2019, the Stingers' plan was to turn him into a pass receiver…

< p>Head coach Brad Collinson, who had changed his mind after seeing Roy's determination to play as a quarterback, has never regretted giving him the chance. To this day, his athlete's work ethic still impresses him.

“He does a lot of extras,” Collinson said. He wants to learn every day and he is never satisfied. It's so nice to have a player like him. He pushes others in the right direction.”

The English-speaking university pilot also believes that we have not yet seen the best of Roy.

“Olivier has made a lot of progress since he has been here. He is better every year and he has not yet reached his full potential,” he said with confidence.

Stingers: a team of veterans

The Concordia Stingers have not stopped improving since the arrival of head coach Brad Collinson in 2018.

Last year, the club maintained a 4-4 record and took third place overall. The vast majority of players present during this campaign will be back in 2022.

“We are a team of veterans, so there will not be many young people among our starters this year. They will, however, be involved on the special teams and they bring us a great depth,” said Collinson.

“To have experienced footballers who have been there as long as we [coaches], that's a big plus. They know how it works and can show our new ones.”

The same goes for quarterback Olivier Roy, who is also enjoying his new role as mentor.

“Most of our starters from last year are still there. It showed up in training camp. We made fewer mistakes than in the past,” said the man who will soon begin his third university season.

Results in the playoffs

The next logical step in the Stingers progression would be to win at least one playoff game, which hasn't happened since the Collinson era. In fact, Concordia hasn't known the joy of a one-night stand since the 2008 season.

“When we came to Concordia, we wanted to build a culture. We didn't want to skip a step and progress every year. I think we've managed to do that, although we still have a long way to go,” Collinson said of the matter.

Roy, for his part, is confident that his team will another leap in his progress, but he is well aware that the results will be the test of everything.

“From what I see so far, we are going in the right direction, affirmed the player by RSEQ excellence in 2021. But it's one thing to improve in practice, but it's such a competitive league. The victories will be disputed on a few key games. We're going to have to make the plays when it counts to show our progress.”