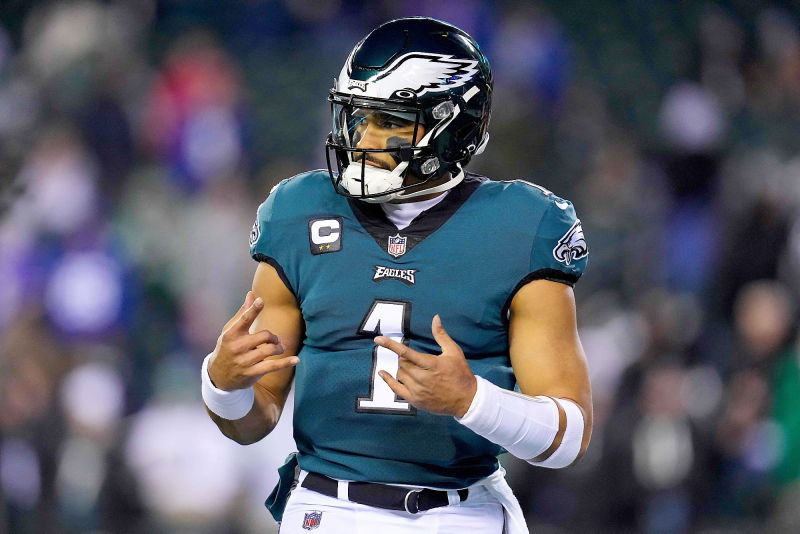 PHILADELPHIA | With the National Conference Finals just days away, Eagles quarterback Jalen Hurts knows the challenge ahead for his team facing the 49ers is colossal. Yet his voice is low, his tone is calm, his gait is slow. A bit like he was going to play a preseason game in August rather than the last leg before the Super Bowl.

In this conference final, all eyes seem to be on the 49ers' young rookie quarterback. It's Brock Purdy here, Brock Purdy there. His unexpected outbreak seduces fans of stories involving big underdogs.

In the other final, that of the American conference, the prowess of Patrick Mahomes with the Chiefs and Joe Burrow with the Bengals sinks ink rivers. In this quartet of quarterbacks, it's a bit like Hurts becoming the fourth wheel.

Still, he was splendid in his second full season as a starter, passing 66.5% of his passes for 3,701 yards, including 22 for touchdowns, to just six interceptions.

He also was impressive on the ground with 760 yards and 13 touchdowns, even though he missed two games. Two games that the Eagles lost, which further cemented his value. However, Hurts is far from throwing flowers at each other, which his teammates seem to appreciate.

“I have the desire to win, I put in all the necessary effort, I try to be diligent about all the details and I strive to be the best leader I can be. I often say leaders lead because their peers let them be leaders,” he said, deflecting credit to others.

Hurts' progression this season is notable. In his first two campaigns, his completion rate was only 52% and 61%. He cut his interceptions from nine to six and threw six touchdowns and almost 600 yards more than last year.

Yesterday he was named a finalist for the Most Valuable in the League, an honor that will no doubt go to Patrick Mahomes on Feb. 9.

“I didn’t even know,” Hurts muttered when he was called upon to comment on the nomination.

While Philadelphia fans are known to be loud and emotional, Hurts is zen personified. This does not prevent him from having all the support in the world in the city.

“He deserves to earn this honor. It was the most important piece of everything we built this year. I don't know who votes for these awards, but in my mind, he deserves all the votes,” said tight end Dallas Goedert.

“His results speak for themselves. He is having a phenomenal year. I know I'm biased, but I see it at work every day. I know he deserves such honours, but we have greater collective goals,” said head coach Nick Sirianni.

Regardless of what he may or may not reap individually or collectively, Jalen Hurts is a smoking gun for the Eagles organization.

General Manager Howie Roseman drafted him in the second round of the 2020 auction, even though he had just granted a contract extension to who was identified as franchise quarterback Carson Wentz.

The chain has since gone off the rails in the case of Wentz, who has been traded twice, and Hurts has stepped in to quickly revive the Eagles.

It must be said that he was equipped to experience inconvenient situations, he who had been relegated to the bench, in favor of Tua Tagovailoa, with the Crimson Tide of Alabama, in the NCAA. It took a transfer to Oklahoma for him to show his worth.

On the eve of his most important career game to date, a step away from the Super Bowl, Hurts remained true to himself. Few words, only action…

“Now is not the time to reflect on my journey because it is not over,” he said. he wisely stated.

Revenge of a Memorable Duel

Quarterback Brock Purdy in action in that memorable November 9, 2019 college game against the team led by a certain Jalen Hurts… whom he will find on his way, Sunday.

This is the first time that Brock Purdy and Jalen Hurts will be involved in an NFL duel, but the two quarterbacks crossed swords a few years ago and this game remains fresh in their memory.

There is something! On November 9, 2019, Hurts played for the University of Oklahoma Sooners in his final season in the NCAA. Purdy was playing with the Iowa State Cyclones in his second year.

Jalen Hurts' squad were heavily favored to win, by 14 points. In the first half, everything was going according to plan when Oklahoma took a 35-14 lead. Then, the sky fell on them when Purdy orchestrated a furious comeback.

One who laughs, one who cries

With 24 seconds to go, Purdy threw the touchdown pass to tie the game, but the team went for a two-point convert and his pass was intercepted.

“It's two different teams and two different eras. I still remember we took an early lead with five touchdowns in the first half. we won. It was a good game,” Hurts said, almost smiling, when he looked back on the game yesterday.

< p>Both quarterbacks had been phenomenal. Purdy had 282 yards through the air with five touchdowns, in addition to 55 yards rushing and another touchdown.

Hurts had 273 yards through the air and three touchdowns, in addition to 68 yards rushing and two additional majors.

“I have a lot of respect for him,” Hurts continued of his vis-à-vis. He makes the big plays and he has the right attitude. He's been like this since he was in college, so I'm not surprised to see him do well in the NFL.”

Obviously, there is very little chance that Sunday's duel will be so explosive. The defensive units of the Eagles and 49ers are light years ahead of that of the Big 12 conference, where defense is an afterthought.

That doesn't stop the two antagonists from thinking back to those glorious moments from the past as we prepare to reconnect.

“I still remember feeling like you absolutely had to score every time you had the ball. The storyline will be very different this time around, but it was a fun match to be in. It was a good experience to come face to face with a quarterback like Jalen ,” Purdy said during his press briefing yesterday broadcast by the 49ers.

IN THE CITY OF BROTHERLY LOVE

The Journallands in Philadelphia this week ahead of Sunday's National Conference Finals between the Eagles and 49ers. Known as the city of brotherly love, Philadelphia only has it for its Eagles. Strolling through the streets, when one is wearing a team toque and an unknown passerby passes him by, the “Go Birds! ” are heard immediately. Same observation at the restaurant when the waitress gives us the bill. No time to ask for allegiances, it's the city of the Birds!

Obviously, who says Philadelphia says Rocky Balboa, the famous boxer played by Sylvester Stallone in the hit film series. Larger than life, this character from the streets of Philadelphia in the mid-1970s still fascinates. For a walk at the end of the day in the middle of the week, onlookers still gather around the statue of Rocky, installed in 1982 near the Museum of Arts. It was Stallone himself who had given the statue to his adopted city. Said statue was later moved to the Ports District, then brought back in 2006 near the Museum, where it was made famous in the film Rocky III. An obligatory pilgrimage for any serious amateur!

EAGLES ON THE STEPS

Speaking of Rocky, very close to his statue, it is fascinating to see how many runners are still climbing the 72 stone steps of the Museum of Arts, as the boxer did in training, in the first film of the series in 1976. These happy runners of course take the time to take a break, arms in the air like the fictional pugilist, once at the top of the steps. This week, the premises are inhabited by giant scale replicas of Eagles players, such as Jalen Hurts, Boston Scott and Darius Slay. Yes, even this great tourist attraction is Eagles.