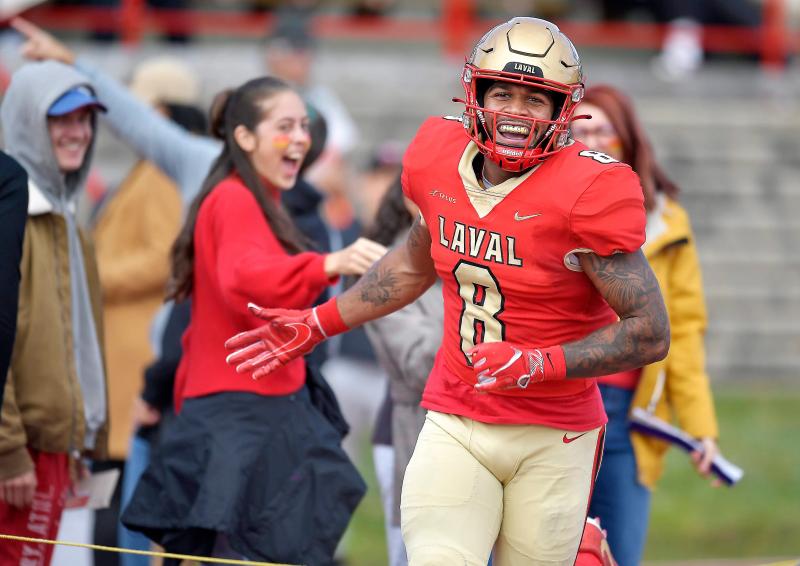 In front of several former architects of the first Vanier Cup conquest in 1999, the Rouge et Or gave themselves the air of a champion team by pulverizing the Concordia Stingers 60 to 14, Sunday afternoon at TELUS-UL Stadium.

With a 60-point offensive push and a three-touchdown performance from Kevin Mital, Glen Constantin's men made sure to honor those who paved the way for them.

For this game at 90s retro theme, the Rouge et Or had chosen to honor the members of the formation having won the very first Canadian university title in the history of the program (see other text on page 59).

After a loss to the Montreal Carabins two weeks ago was a great way to bounce back, said Constantin.

“Scoring is one thing, me it's the execution [that matters to me]. We had some good starts. […] The focus was good. It's a perfect scenario for us,” he said.

Mital gets the ball rolling

Université Laval star player Kevin Mital looked like a star on Sunday after his touchdowns.

However, things got off to a bad start for the Rouge et Or, who allowed a touchdown on the game's first offensive sequence. The celebrations pretty much ended there in the Concordia clan, as the tide quickly turned.

The next 60 points of the game were to be scored by the locals, dressed in red and gold for the first time of the season.

“We had a few complications at the start. Then we took our way to go. »

It was a certain Kevin Mital who was the spark for the attack (see other text on page 59). After catching a pass from Arnaud Desjardins, the star receiver took to his heels for 86 yards to tie the game.

The Rouge et Or were on and never looked back afterwards, to the delight of the 13,520 spectators. They added 35 points in the second quarter to cut short the visitors' hopes of coming from behind.

Arnaud Desjardins also shone with a third game of more than 300 passing yards this fall. He finished his day at the office having completed 25 of his 29 passes, 364 yards, five touchdowns in addition to scoring one himself on a one-yard run.

< p>He thus became the second quarterback in Rouge et Or history to score a second game with five touchdown passes in the same season. Only Hugo Richard had achieved the feat in 2014 and 2018.

Rouge et Or quarterback Arnaud Desjardins was entitled to impeccable coverage from his offensive line.

In the opposing camp, head coach Brad Collinson would have preferred to see his players continue their momentum from the start of the match rather than fade away.

“We started strong as we wanted. We just didn't continue. We made mistakes, there were a lot of penalties. “, noted the head coach of the Stingers, Brad Collinson.

“It was not our day, but it will not define who we are for the season. We have to turn the page on this, we have a big game next week. »

His quarterback, Olivier Roy, for his part, deplored a series of costly errors and an overflow of penalties. The officials awarded the Stingers no less than 105 penalty yards.

“We knew we couldn’t afford them against Laval. It killed us and we dug our grave quietly not quickly, ”he agreed.

► The Rouge et Or will host the McGill Redbirds next week. Five new signings who will join the team were introduced to the crowd during halftime. Arnaud Laporte had his third interception of the season and leads the RSEQ in this chapter.

The ground attack finally gets going

The Rouge et Or's rushing offense was struggling to start since the beginning of the season. The machine started up again on Sunday, thanks in part to a rookie running back.

Angel Vital made a good first impression in his first career game with the Rouge et Or. Thanks to 77 rushing yards and a touchdown early in the fourth quarter, he signed the best performance by a running back this season.

“At the beginning of the week, I prepared myself. I was excited, I was stressed. But my teammates supported me, helped me, so it was easy to get on the field,” he said, rushing to distribute the praise to his teammates on the offensive line. /p>

The ground offense still hadn't scored a touchdown in the first three games. The situation was corrected by Vital's middle finger as well as that of Isaac Gaillardetz.

In total, 224 yards were gained on the ground against the Concordia defense, another peak this fall.

A smile on your face

The good humor of the Vanier Cheetahs product was contagious on the field after the game. It was impossible for him not to smile when he looked back on the highlights of his performance.

“We all played well as a team. So I'm happy,” he said humbly, admitting in passing that he was inhabited by “good stress” before jumping into action.

“But after the first game was okay. We were in the game. »

Receiver Mathieu Hudon tried to beat his roofer with a run in possession on Sunday during the Rouge et Or's crushing victory.

Head coach Glen Constantin was quick to hand out the flowers to his running backs. The Rouge et Or big man was especially happy to have had “a good opportunity to break in the ground game”.

“In Laval, we have a lot of depth everywhere. It's about seizing the opportunity. I think that's what he did today. […] You want to have your place, it's not your reputation, it's your actions [that count]. And the guys have taken action,” he praised, also pointing to the good work of Gabriel Leblond.

As to whether his recent accomplishments will earn him a bigger role in porters ball, Angel Vital doesn't dare come forward.

“I take this every week. If all goes well, I still hope to see some ground. Being on the field with my teammates and performing. Get to the Dunsmore Cup and the Vanier Cup if possible. »