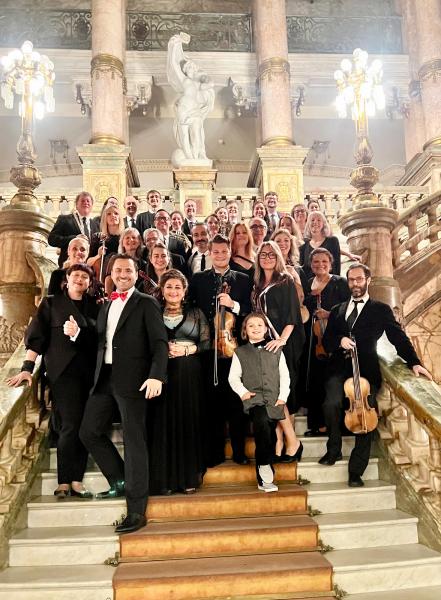 Sao Paulo, Brazil | The day after the fifth and final concert of their first lifetime tour of South America, Alexandre Da Costa and the Longueuil Symphony Orchestra are back on the road Quebec with their heads held high and their hearts overflowing with joy. “I have had confirmation that I am not alone in my madness”, explains the maestro with emotion.

On August 9, Alexandre Da Costa and 33 OSDL musicians left Quebec to embark on their first joint international tour. This tour would take him to Colombia and Brazil, for five concerts in major theaters in as many South American cities.

“This tour really exceeded my expectations,” says violinist conductor Alexandre Da Costa. I wanted there not to be too many problems, because anything could happen. In fact, I didn't believe it until the last minute. To see it's been such a huge success, I can't even believe it, I'm speechless! ”

During this tour, Da Costa explains that he understood one thing: that all the musicians – even those who were more recalcitrant at first sight about his unique approach to classical music – loved this kind of tour. By this he means a human tour uniting all the participants with strong desires to “do something different and human. “

” At the end of the last concert in Sao Paulo, all the musicians came to me and surrounded me during the last piece (J't'aime comme un fou by Robert Charlebois), he says with emotion. I had no idea they were going to do this and for me, that was the strongest moment of all.”

If after this last concert in Brazil, several musicians looked at each other with tears in their eyes, it is a lot thanks to the 42-year-old conductor who has the gift of being a positive leader, coupled with a sensitive being and human.

“ I would never have believed that we would go there, continues the one who has in mind many other major projects for the OSDL. We all became friends, everyone was sincere. I saw in their eyes the deepest human warmth. ”

To the power of ten

For Da Costa and his band, the concerts offered in Brazil during the second part of the tour were to the power of ten of what they experienced in Colombia. They are not about to forget, for example, the sumptuous Municipal Theater of Rio (a dazzling replica of the Paris Opera) or this evening that stretched until dawn in a small restaurant in Sao Paulo.

“ I light the fire, but it is up to people to maintain it and make it grow, adds the maestro who says that during this tour, he experienced strong moments artistically, personally and humanly. I wanted to do a tour that looked like me, which was going to be an adventure in Latin countries whose culture I deeply love. I thanked the musicians for following me in there and for coming.

His father's heart also melted each time his son Mattenzo, 8.5, took the stage to conduct the orchestra at the end of the concerts, and when he interacted in such an adult way with the other members of the troupe. .

The Da Costa family on Copacabana Beach in Brazil.

As for his wife and tour press officer, Martine Cardinal, he says he has no idea how he could make other trips like this without her invaluable help.

“His connection with people, including all musicians, made a big difference,” he says. We have a passion for music, but honestly, we have a passion for adventure and human relations. It is humans who have created these defining moments. We wanted to experience something unique and that's exactly what happened. »

SOME FAVORITES OF ALEXANDRE DA COSTA IN BRAZIL:

♦ Alexandre Da Costa and his jazz trio Stradivarius BaRock will be at the St-Zénon festival in Piopolis on August 27: festivalpiopolis.com.

The sequel for the OSDL